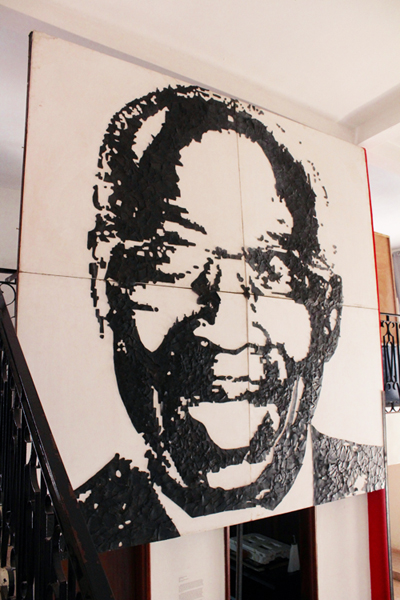 Defining the self can be a fraught exercise for 21st century individuals. One might feel caught between ethnic pride and strident nationalism, a sense of unbalance between family expectations and economic realities, or the anxiety of owning two passports. Navigating the multiple identities that shape contemporary life requires awareness, a process of self-exploration that draws from the visual cultures we consume daily. With the instantaneity of news, entertainment, and cultural consumption, today’s populations are asked to process the local, regional, and foreign within the same conversation. The artists in this section consider strategies for how we might rectify labels that seem contradictory, unpack problematic characterizations, and find value in the ensuing conversations—even if no resolution manifests.

Drawing from the rich religious landscape of Senegal, Henri Sagna sculpts work that teases out the legacies of Islam and Christianity. As the crescent and cross cut sharp silhouettes in one scene, then lose their determinacy in the next, Sagna posits a symbiosis that ebbs and flows. Negotiating a heritage that goes from Dakar to Philadelphia to Saint-Louis, Pap Souleye Fall recently returned to Senegal and draws from his Diasporic experiences to explore blackness, migration, and commodity. Responding to cultural excess, evidenced by the crates of material that regularly arrive at Dakar’s port, Fall constructs cumbersome forms from abandoned clothing and technology that refer to humanity’s continuous displacement.

Sifting through heritage and tradition to arrive at a contemporary that is not burdened by primitivizing stereotypes, video-based artist Fatou Kandé Senghor and photographer Ibrahima Thiam offer strident individuality and technological artistry as lenses for addressing mythology and misperception. Kandé Senghor demonstrates a keen concern for the problematic mystique around traditional rituals. In showing the Diola youth as living between two worlds—namely, the forests of Casamance and their contemporary urban life. Similarly working with a narrative that could be miscategorized as arcane or anti-modern, Ibrahima Thiam acutely employs his body and his camera to translate oral traditions of Saint-Louis into a tech-oriented, aesthetic archive.

The identities represented by these artists touch only a few of the realities negotiated by populations in Senegal. As artists react to socio-cultural influences— from religion, ethnicity and mythology, to technology, gender, and economies— novel identity intersections are born, and younger generations develop new vocabularies that both reach more broadly and speak more distinctively than before.