KENT, Ohio - The creative relationship between an artist and their master printer is one that is both unique and often overlooked. The School of Art Collection and Galleries at Kent State University is proud to present an exhibition that focuses on one such relationship called “A Collaboration of Creativity.” The exhibition features a wide range of prints by distinguished artist David C. Driskell and master printer Curlee Raven Holton. The work will be on view at the CVA Gallery from Oct. 6 through Nov. 10, 2021.*

“A Collaboration of Creativity” is presented in partnership with the David C. Driskell Center at the University of Maryland. Additionally, an artist talk by Curlee Raven Holton will take place on Friday, October 22 at noon in room 165 at the Center for the Visual Arts at Kent State. Both the exhibition and the artist talk are free and open to the public.

The CVA Gallery is located in the Center for the Visual Arts, 325 Terrace Drive in Kent, Ohio. 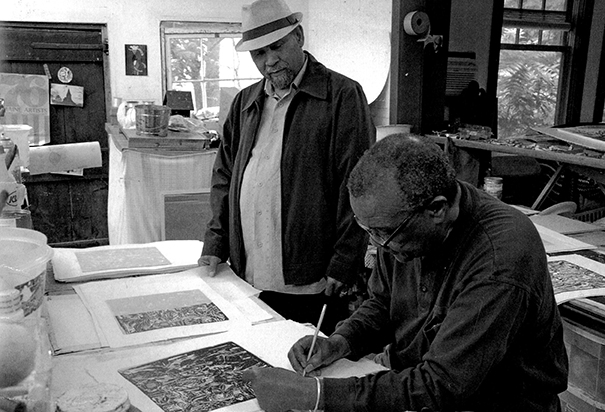 The Artist/Printer Relationship: The relationship between an artist and their master printer is one of collaboration and respect, which is evident by the historical partnerships such as Robert Rauschenberg and Andy Warhol or Aldo Crommelynck and Pablo Picasso. The creative partnership between Driskell and Holton was unique and notable to the history of American Art.

Both artists worked as professors, the late Driskell at the University of Maryland and Holton at Lafayette College in Easton, Pennsylvania, teaching art and art history. Their relationship began in 2003 when Driskell was invited to be a guest speaker at Lafayette College. There, he saw the work that Holton was doing with artists at the Experimental Printmaking Institute (EPI), which Holton established with a vision to provide artists with the time, space, materials, and professional support to create new work. Driskell was intrigued by the idea and was invited by Holton to create a fine art print at EPI.

Not long afterwards, the two immersed themselves into their first collaboration as they printed the limited edition earth-toned etching, “Brown Derby” (2003), featuring mask-like, overlapping faces, reminiscent of one of Driskell's well-known and loved offset lithographs from 1986, “Spirits Watching.” This was just the beginning of their twelve-year collaboration, which resulted in the creation of over 40 individual editions.

“Collaborative projects between artists can be difficult to navigate in general - trying to negotiate personalities, egos, and their creative will. However, the harmonious collaborative relationship between these two masters that has spawned over 40 creative projects and a lasting friendship is a testament to what creative partnership is destined to be,” stated Rodney Moore, Driskell’s Art Manager. “One key observation of the interaction between Curlee and David is the tremendous amount of respect and admiration they have for each other. ‘Maestro,’ which means a great and distinguished figure in a field, is how these two humbly greet each other in the studio.”

Born in 1931 in Eatonton, Georgia and raised in North Carolina, David C. Driskell completed the art program in 1953 at the Skowhegan School of Painting and Sculpture, Maine. He received an undergraduate degree in art from Howard University in 1955 and an M.F.A. from Catholic University of America in 1962. He then pursued post-graduate study in art history at The Netherlands Institute for the History of Art in The Hague. Trained as a painter and art historian, Driskell works primarily in collage, mixed media, and printmaking.

About Curlee Raven Holton (b. 1951): Curlee R. Holton is a printmaker and painter whose work has been exhibited in more than 40 one-person shows, and one hundred group shows. His exhibitions have included prestigious national and international venues like Egypt's 7th International Biennale, Taller de Artes Plasticas Rufino Tamayo in Oaxaca, Mexico, the Cleveland Museum of Art, and the Whitney Museum of American Art.

Holton earned his M.F.A. with honors from Kent State University and his B.F.A. from the Cleveland Institute of Fine Arts in Drawing and Printmaking. Since 1991, he has taught Printmaking and African American Art History at Lafayette College in Easton, Pennsylvania and is also the founding director of the Experimental Printmaking Institute. In 2010, Holton was named the David M. and Linda Roth Professor of Art at Lafayette College. He retired in from teaching in 2017 but still serves as Director and Master Printer at Raven Editions as well as Director and Artist-in-Residence of the David C. Driskell Center for the Visual Arts and Culture of African Americans and the African Diaspora.

About the School of Art:  The School of Art at Kent State University was established in 1941 and maintains a tradition of excellence in visual arts education, creation, scholarship and leadership. Its undergraduate and graduate programs in the visual arts offer a range of directions and opportunities in the fields of art education, art history, and a comprehensive array of studio disciplines including painting, drawing, print media & photography, sculpture, ceramics, glass, jewelry/metals/enameling, and textiles. The School of Art Collection and Galleries consist of six exhibition spaces located on the Kent campus and downtown Kent and a collection of over 4,000 artworks and objects. The School of Art is located at the Center of the Visual Arts at 325 Terrace Dr. in Kent. The 27,900-square-foot facility — twice the length of a football field —had its grand opening in 2016 and houses all School of Art studios and classrooms under one roof.

*The original dates stated this exhibition ran through Nov. 11. Kent State University will be closed that day in observation of Veterans' Day and therefore the galleries will be closed. We apologize for any inconvenience this may cause.