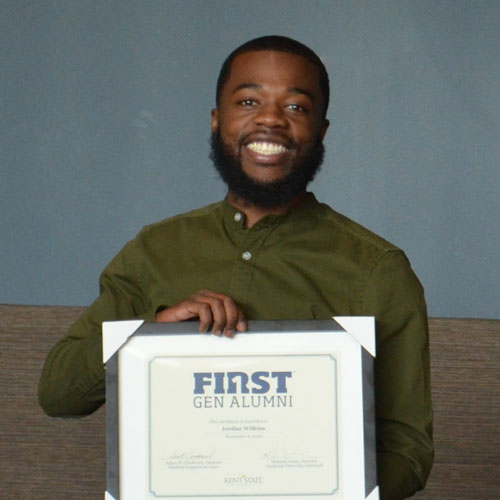 ​​​​​​Jordan Wilkins is a first-generation college graduate and a 2018 alumnus of Kent State University.  Born and raised in Youngstown, Ohio, Jordan first came to Kent State through the S.T.A.R.S. Program during the summer of 2013.  If you ask him, Jordan will tell you that participating in the program allowed him to step out of his comfort zone, succeed academically, identify and explore his cultural heritage as an African-American man, and get acclimated to the college environment.  He credits his involvement in S.T.A.R.S. as part of the reason he became involved with Kappa Alpha Psi Fraternity, Inc., The Male Empowerment Network (MEN), TRIO Student Support Services, and Kupita Transiciones.

As an SSS program student, Jordan also worked as a Peer Mentor, helping other first-generation and underrepresented students transition to college and achieve success.  Out of all his experiences at Kent State, Jordan says serving as a Peer Mentor was one of the most fulfilling and rewarding ones, foreshadowing his current career.  Upon graduating in 2018 with his Bachelor of Science in Marketing and a minor in Pan-African Studies, Jordan accepted a position with Inspiring Minds, an organization dedicated to serving students in grades 3-12 through after-school and summer programming.

In his current role as Transition Coordinator, he supports students as they transition out of high school into adulthood, whether that next step is into the workforce, the military, a 2-year community college, or a 4-year university.  Jordan credits the faculty, staff, SSS program, and the Student Multicultural Center as being his inspiration and motivation while at Kent State, much like we credit him being an inspiration to so many other Kent State students and alumni. 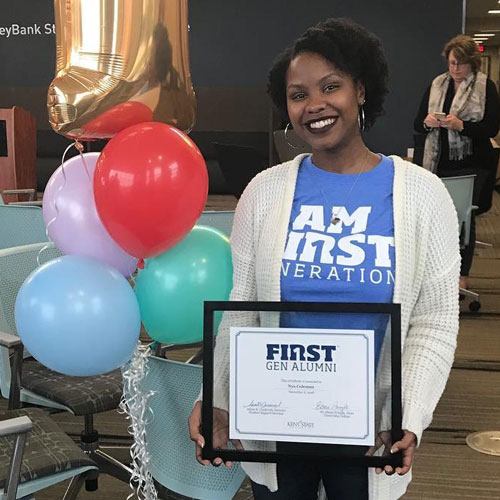 Nya Coleman is a first-generation college graduate and a 2018 Alumna of Kent State University.  Originally from western Pennsylvania, Nya attended Kent State as an out-of-state student eager to pursue career aspirations in journalism.  After arriving on campus, Nya joined the TRIO Student Support Services program and Zeta Phi Beta Sorority, Inc., where she found communities of support.  With resources in-hand and opportunities before her, Nya didn’t survive, she thrived.  As a journalism major, Nya put classroom knowledge and theory to practice and became the Flashcast Executive Producer for Kent State’s independent, student-led television station: TV-2.

Upon graduating in May of 2018 with her Bachelor of Science in Journalism and a minor in Pan-African Studies, Nya accepted a position with CBS News in New York City where she conducted research for CBS This Morning and worked alongside producers and editors in writing scripts and creating social media videos.  Nya currently works at WFMY News 2 in Greensboro, North Carolina as a Morning Show Producer and is a true example that TRIO works. 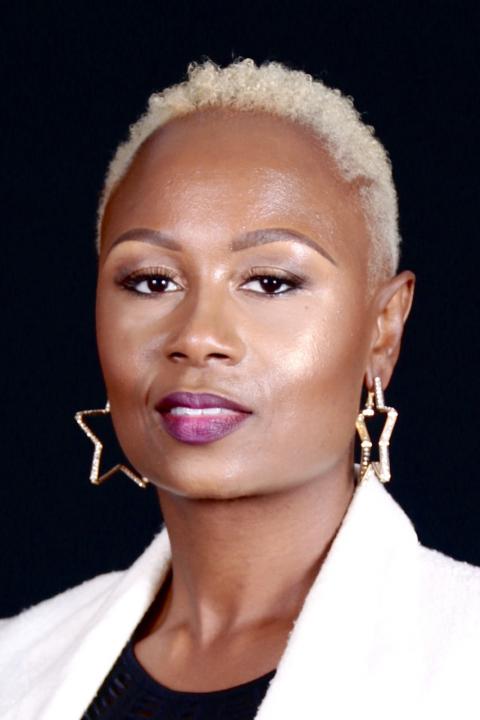 Dr. Tameka N. Ellington is a First-Generation Revolutionary, Scholar, Educator, Speaker, Image Specialist and Philanthropist. She spent the last 20 years of her career in the fashion industry and academia developing prolific research and serving students. She is Founder and CEO of Entirely Incorporated™, a multidimensional wellness brand with the goal of helping clients live their full life. She specializes in self-esteem/confidence building, social/professional/dress etiquette, and professional image consulting.

Dr. T. is extremely passionate about youth and young adult development and the empowerment of those who are first generation, and has recently founded The First-Generation Revolutionaries Movement™, a campaign to equip future revolutionaries with professional advancement, spiritual fulfillment, mentorship, authentic camaraderie and networking. Dr. T. is author of "Make Fear Your Superpower," and her ULTIMATE purpose in life is to inspire others and help them turn their fears into useful strategies towards abundance. 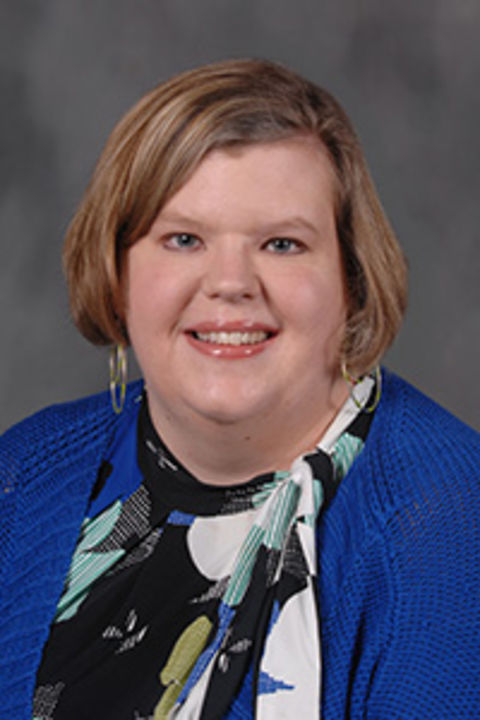 Dr. Kelly Cichy is both a first-gen college graduate and advocate.  Dr. Cichy graduated with her Bachelor of Science in Psychology from Xavier University and completed both her master’s and Ph.D. in Human Development and Family Studies from Pennsylvania State University.  Upon completing her graduate degrees, Dr. Cichy conducted research for Penn State and since joining Kent State University in 2007 as an Assistant Professor in Human Development and Family Studies, she has presented at dozens of national conferences, published numerous peer refereed articles in journals such as the Journals of Gerontology, the Journal of Marriage and Family, and the Journal of Vocational Rehabilitation, and has been promoted to Associate Professor.

In addition to her teaching and research, Dr. Cichy also demonstrates her commitment to student success through her service on the University Accessibility Committee and serving as the Faculty Coordinator for the TRIO McNair Scholars Program.  As Faculty Coordinator for McNair, Dr. Cichy teaches the McNair Research Methods courses, helps Scholars identify faculty mentors, plans and facilitates seminars on faculty roles and the graduate application process, and assists with many aspects of program planning. 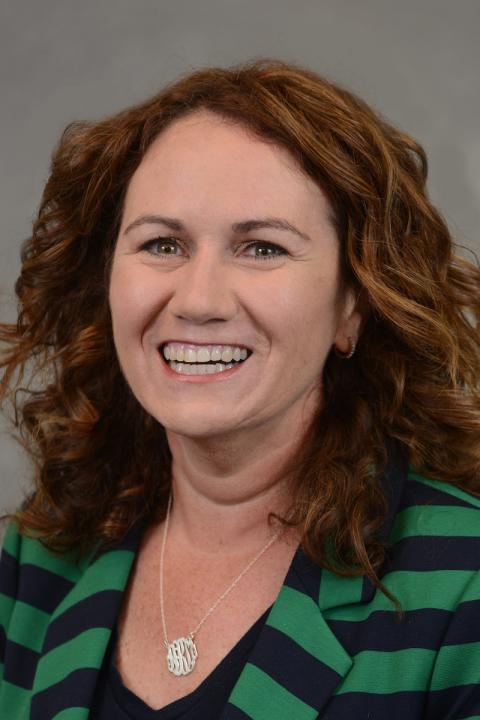 Nicole Kotlan is both a first-gen college graduate and advocate.  The daughter of two immigrants, Nicole navigated the college application and transition process with a lot of assistance from guidance counselors, her older brother, and the mentors she would soon meet at Kent State.  Upon arriving to campus as an undergraduate student, Nicole was lucky to have found a mentor in Liz Sinclair, Assistant Dean in the College of Business Administration, who assisted her with everything from FYE and selecting a major, to co-teaching an orientation course and participating in a pilot learning community offered by the College of Business.

Nicole also benefitted from the support and mentorship of Dr. Pamela Grimm, whose guidance helped Nicole navigate the graduate education and post-graduation job search processes.  It was this support both inside and outside of the classroom that Nicole says made all the difference in her experience at KSU.  Nicole is a two-time (soon to be three-time) alumna of Kent State University where she obtained her undergraduate degree in Business Administration and her master’s degree in Higher Education Administration and Student Personnel.

Upon graduating and working in the private sector for some time, Nicole decided to return to higher education, this time as someone who could pour into the students she would serve, much like Liz and Pam had done with her.  As fate would have it, Nicole accepted a position in the Undergraduate Programs Office in the College of Business Administration in 2010, where she was fortunate enough to work with her mentor, Liz.  During her time in the College of Business, Nicole worked in close partnership with the Kent State TRIO Upward Bound Programs, working with staff, students, and parents during special programs to teach a two-week summer session for their Summer Academy.

Nicole now serves as the director of the Exploratory Advising Center.  Under her leadership, she and her team worked with TRIO Student Support Services to create and implement a first-generation section of the First Year Experience course.  She also worked to re-align some of her advising positions to include a primary focus on first generation students to further support them and help increase their retention and graduation rates.

Anissa Strickland is both a first-gen college graduate and advocate.  Growing up in rural Ohio, Anissa graduated from a high school where only 7 students in her graduating class went to college.  In addition to a limited family income and being first-generation, she also received little support from her high school guidance office during her senior year – going to college was a huge struggle.  Despite the barriers she faced, Anissa pursued her dreams of a college degree and graduated from Marietta College.

As fate would have it, KSU Alumni working for Marietta College encouraged her to pursue a graduate degree at Kent State University – and that’s exactly what she did.  Anissa received her master’s degree in Higher Education Administration from Kent State University and hasn’t left the University since.   In the 25 years that she has been at KSU, she has worked as a Graduate Assistant and Residence Hall Director for Residence Services and has continued to climb the ladder from her first Financial Aid Counselor position to her current role as Senior Associate Director of Student Financial Aid.

Anissa will tell you that she is exceptionally good at spending other peoples’ money and has a big heart, which is precisely why we are so thankful to have her on our side.  Whether it be awarding KSU Scholarships to TRIO Upward Bound alumni who have decided to become Golden Flashes or working with TRIO Student Support Services’ staff to eliminate the financial barriers many students face, Anissa truly impacts students in ways many of us don’t observe.