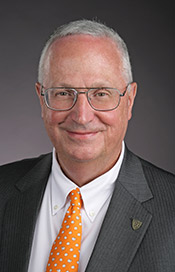 “A New Pedagogical Domain: Application of Extended Reality and Other Gizmos to Educate Today’s Students”

The challenge of today’s university is to increasingly educate a more academically diverse student population.  Particularly in open access public universities, student arrive with varying degrees of academic preparation and learning styles.  The students of today have grown up “digitally”, which create both strengths and learning constraints in terms of the traditional pedagogy.  At the same time, we have seen an explosion of a large spectrum of technologies that come under the umbrella of extended reality (“XR”).   While these technologies have many applications, it is without question that most of them are being applied in pedagogical models in higher education.  The questions we face include; where do they apply, where could they apply; what is the likely direction of XR; and what is the efficacy of XR especially in supporting an academically diverse student population.

McCreary has served on a number of boards, and been a senior advisor to several technology firms, including Oracle, IBM, Motorola, SAP, Kronos, Rockwell, GE and Microsoft. McCreary was appointed by the Governor to serve a third term on the Ohio Third Frontier Commission, Ohio’s program that supports emerging technology, and is well known throughout the state as a mentor and supporter of the technology venture community. In January 2017, Bill joined Microsoft’s Higher Education Advisory Board, which is made up some of the most exclusive universities in the country. In 2017, Bill became the co-lead of the global Educause Extended Reality (“XR”) Workgroup that covers 3D, virtual reality, augmented reality, mixed reality, artificial intelligence, machine learning, simulation gaming and serious gaming for education.

McCreary has been a frequent speaker at technology events, and is well known in the industry.   He was recognized on multiple occasions by CIO Magazine through its annual CIO 100 awards.  He has spoken at several national tech events on such topics as open source software, beyond web 2.0, rapid innovation via collaboration technology, global virtual organizations, real time integration of the enterprise, software licensing and simulation game development.  He is a member of the Detroit CIO Governing Body. Bill was featured on the cover of Toggle journal magazine in fall 2016, where he is highlighted bringing private sector IT expertise to the academic realm.

McCreary holds an undergraduate degree in chemistry with minor in engineering/math, and master’s degrees in econometrics, applied math/computer science, and business finance, as well as a law degree in intellectual property.  He has completed post graduate work in computer science, electrical and metallurgical engineering and serious game development.  He is currently a doctoral student with a focus on complex software using artificial intelligence applied in simulation game instantiations.  His current work is being applied toward the creation of serious gaming for academic and training applications, and his current research is on how to deploy intelligence in simulation game avatars with meta-heuristic genetic algorithms. McCreary also is a Six Sigma Master Black Belt.