Confronted by a blank canvas, art professor Janice Lessman-Moss claims she’d have no idea where to start. But challenged by the practical limitations imposed by one of the weaving looms in Room 176 of the Center for the Visual Arts, or the digital loom in her home studio, there’s no stopping her.

“A blank page would be intimidating to me because I need something to rest on, dig into or push up against,” says Lessman-Moss, the head of Kent State University’s Textile Arts Program. “The basic intersection of warp and weft thread is so direct and simple that what fascinates me is the way layering patterns and altering structural systems can add mystery to it. I never want a viewer to look at a work and say, ‘Oh, I get it’—I want them to step back and say, ‘Wow, what’s going on here?’ ”

If her complex creations invite comparisons to everything from natural patterns to neural networks, that’s also by design. “The loom is a binary system, just like a computer,” she says, noting that the 1804 Jacquard loom, with its simple punch card programming, is considered the 19th century precursor to the 20th century computer processor. “The thread goes up or down, warp or weft, zeros or ones. Working with parameters like that, I think, makes you more inventive.”

Elevating the centuries-old craft of fabric making to a high art that connects complex math, digital algorithms and deep intellect is the continuing thread that’s run through Lessman-Moss’s 35-year career at Kent State University, where she was selected for a 2016 Faculty Excellence Award. With textiles and tapestries that have been on display in galleries and museums around the world, she’s earned growing recognition in the regional arts community. In addition to receiving numerous fellowships from the Ohio Arts Council, they recently honored her with a 2016 Ohio Governor’s Award for the Arts, the highest award for any individual artist in the state.

While many textile arts programs at other institutions have been subsumed into studio arts or sculpture programs, Kent State University’s commitment to protecting the square footage taken up by the program’s large looms, combined with Lessman-Moss’s hands-on teaching style and active exhibition career, have created a small but tightly-woven program that’s gained greater prominence thanks to the new Center for the Visual Arts, where the weaving studio now occupies prime real estate.

“The loom is a binary system, just like a computer.”

“Fabric is part of our everyday lives—we wear it, we sit on it, we sleep on it, and we don’t necessarily think about the complex work that goes into making it,” says Theresa Bembnister, associate curator at the Akron Art Museum, who featured Lessman-Moss’s geometric weavings in a 2015 show called NEO Geo. “What impresses me about Janice is her ability to explain the complicated process of weaving in a way that helps viewers gain a new appreciation of textile arts and see what we so often miss. And with the advent of digital processes, in order to teach these new ways to weave, she had to teach herself first.” 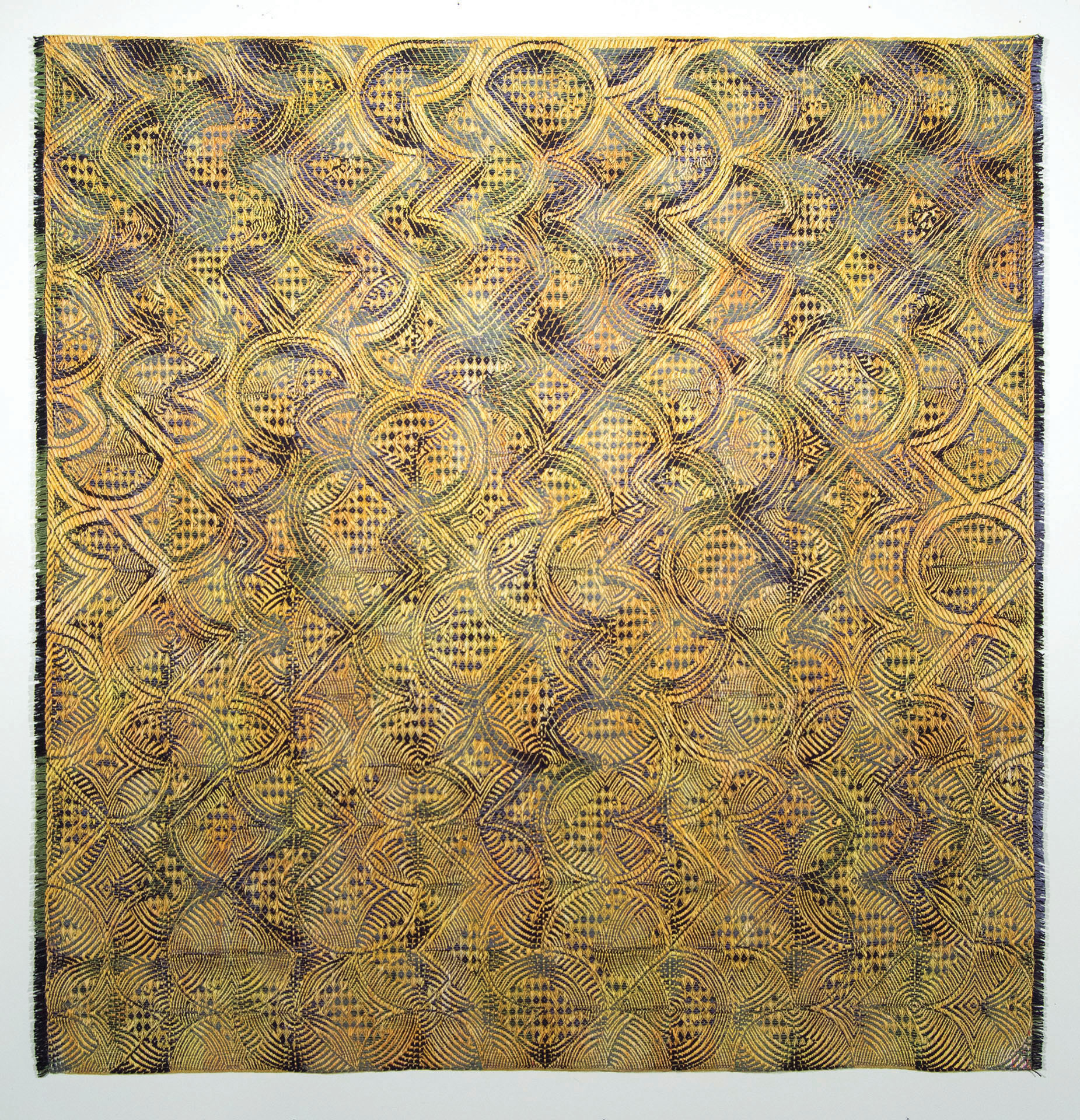 When Lessman-Moss first saw the term random walk listed on a weaving software program, she figured it was a weaver’s invention. But she found it was a financial theory that says stock prices take a random and unpredictable path. “It’s an underlying math theory for many growth patterns,” she says, and it has inspired many of her recent weavings, including “Random Walk Sun,” a close-up of which is seen at left.

“When you teach, you learn so much more than you can ever share,” says Lessman-Moss, adding that embracing technology has taken her weaving in new directions, creating complex patterns with computer software that allows her to see, pixel by pixel, where each thread will come together on the loom.

Though she starts most of her work on screen now, she never loses touch with the looms she loves. “It’s a counterbalance to this fast-paced world,” she says. “Working with tactile materials and just slowing down—like slow food, I call it slow art—makes you live in the present.”

While science and math majors are often attracted to her work, finding signs of fractals, cellular automatons and other geometric patterns, Lessman-Moss says the cultural history of weaving is full of metaphors that the humanities majors in her classes find just as compelling.

“The warp is representative of eternity, because it’s put on the loom under tension and it has a sense of permanence. And the weft is indicative of the vagaries of life, or change. So weaving is the intersection of these two things—the earthly and the heavenly, the temporal and the eternal, the human and the heavens,” she says. “These ideas come from all different cultures, and I make sure to tell students about that, because I think it makes us feel connected to a long history—and that’s a good feeling.”

Laura Billings Coleman is a writer and editor based in St. Paul, Minnesota. 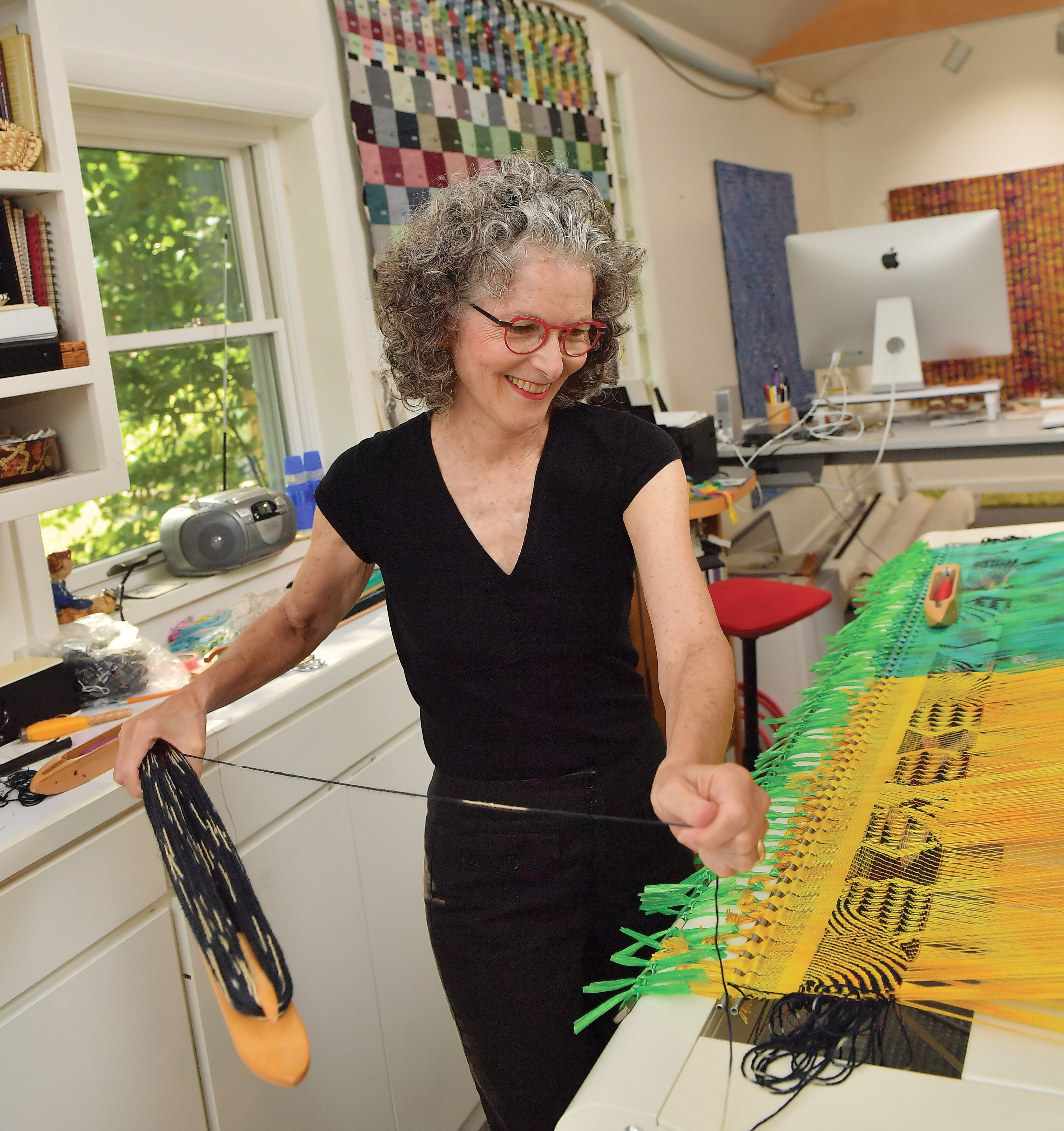 In her-home studio (once a garage), Janice Lessman-Moss weaves at a TC2 digital Jacquard loom she ordered from Norway after her sabbatical there in 2013. “I’d much rather have this loom than a car,” says Lessman-Moss, who typically walks or bikes to the Kent Campus.

Here, she is working on her latest iteration of a “random walk” pattern. Following a traditional technique called ikat (found in many cultures), she has resist-dyed the weft threads at strategically measured intervals to introduce randomness to the weaving.