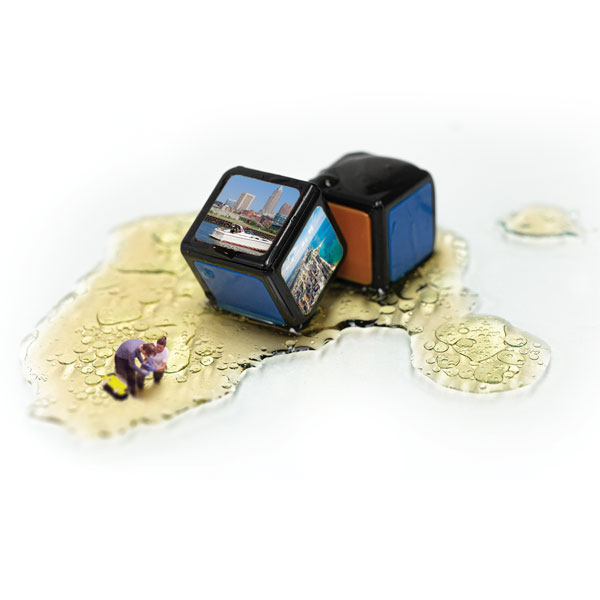 The Great Lakes hold 20% of the world’s surface fresh water and supply drinking water for more than 48 million people. This vital resource is threatened by harmful algae blooms that damage the freshwater ecosystem. Not all algae are harmful and identifying toxic ones (such as cyanobacteria) apart from other algae can be challenging. Joseph D. Ortiz, PhD, professor in the Department of Geology (soon to be the Department of Earth Sciences), developed a methodology using satellite remote sensing to identify different strains of algae in Lake Erie.

“The blooms in Lake Erie are predominantly driven by cyanobacteria,” Ortiz says. “Cyanobacteria are among the most ancient of living organisms on the planet. They date back billions of years and thrive in warm waters that have a high nutrient content.”

“In the Midwest, we’re seeing future predictions for wetter conditions for our environment,” Ortiz says. “More rain will carry more nutrients, more fertilizer from farms into streams and creeks and eventually the rivers that feed into the lake. If climate change is going to make the environment wetter, we can expect that one of the potential consequences of climate change in our area will be worse harmful algae blooms.”

Graduate student Israel Olaoye modeled the impacts of urbanization and climate change on the area’s water quality in a study at Old Woman Creek, which is west of Cleveland. Although only a modest increase in urbanization is predicted for the region through 2100—about 4%—the projected climate-related increase in precipitation would result in much higher nutrient runoff.

“Our best estimates tell us that we need to drop the amount of nutrients getting into the lake by about 40% in order to get these harmful algae blooms to a point where they’re manageable,” Ortiz says. “And that’s with the current precipitation. If we go a few decades into the future, with more CO2 in the atmosphere and higher precipitation rates, the amount of nutrients flowing into the basin is going to increase.”

Mitigation efforts to reduce nutrient runoff include planting vegetation along the riverbanks rather than farming up to the water’s edge. The forest strips that develop along the banks also help stabilize the soil and reduce erosion.

“Many of the climate change issues we’re facing are having increasingly negative impacts not only on the environment but on society, particularly among the most vulnerable populations such as Indigenous communities or subsistence farming,” Ortiz says. “That’s a real challenge because we’re seeing negative impacts occurring faster than previously anticipated. But there’s also opportunity. Every bit of emissions we reduce is one less tenth of a degree of global warming that will help mitigate potential problems coming down the pipeline.”

Read an award-winning article co-written by Joseph D. Ortiz, PhD, that was republished by the Pulitzer Center as part of the series “Climate Change and Great Lake Cities.”
Learn more about the Department of Geology/Earth Sciences.