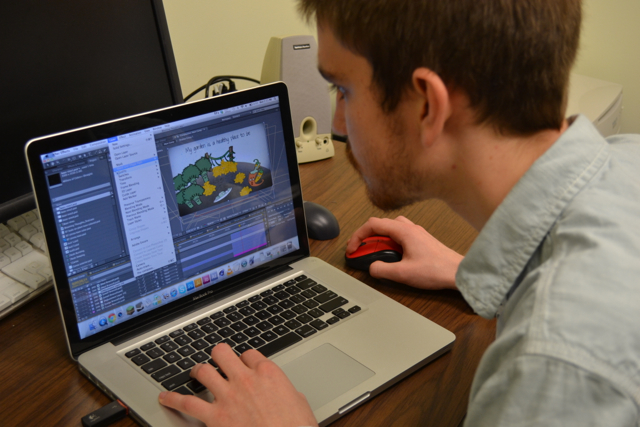 Kent State University’s College of Communication and Information has another award to add to their list. Student Alex Kurr and Graphic Designer Jim Hurguy of TeleProductions produced a video that won a 2014 Communicator Award – Gold Award of Excellence.

The video featuring the senior football players as they “Feed the Fire” was played on the big screen at every home football game just before kickoff. Student, Alex Kurr, produced this video in the summer of 2013. The project took three months, and Kurr believes it was his best work that he did at TeleProductions. The project came after Kurr had been awarded a Silver Award of Distinction in 2013.

The video was hand selected by the Academy of Interactive and Visual Arts, which is composed of top-tier professionals of acclaimed media, communications, advertising, creative and marketing firms. Kurr and Hurguy both say the award means a lot to them, and it was an exciting achievement for both.

As a student, Kurr worked as the lead designer for the video alongside TeleProductions’ Hurguy, who worked as the art director on this project. Hurguy says, “It’s nice to know that our work is on par with a lot of other professionals in the field.”

Even as a student, Kurr now has the top Communicator Award to add to his resume thanks to the experience he gained at TeleProductions. Kurr is thankful for that experience and says, “[I] Definitely wouldn’t be where I am today without them.” Kurr now runs a small animation and design company called The New Fuel with his childhood friend, Brian Recktenwald, who is also an alumnus of TeleProductions. Kurr and Recktenwald continue to do work for Kent State, along with other notable names such as HBO and Fisher Scientific.