Kent State Athletics and TeleProductions collaborated to design and install a brand-new HD video display system in the Memorial Athletic and Convocation Center (MAC Center). A new 4-panel video board replaced the previous center-hung scoreboard which could only display scores and player stats. A new video ribbon board was also installed on the facing of the upper deck loge.

In addition to the video boards, a new video control room was added. It features a video switcher, replay system, graphics system, and monitors that connect the TeleProductions full-time crew and student crew to the new cameras and equipment throughout the arena.

Jason Forbes, TeleProductions Broadcast Engineer, designed the system and worked with Athletics to develop parameters to ensure that it could handle everything that producer/directors could ask of it. Once the plan was set, Forbes, and fellow TeleProductions Broadcast Engineers Allan Fenner and Ken Scheck worked together to build, optimize, and integrate the system into the MAC Center.

The system design also included considerations for the entire athletic facility, including elements designed to make broadcast productions more efficient.  David Rush, Assistant Athletic Director of Facilities said, “Before the upgrade our facility was not ideal for broadcast productions, but the design has made great improvements for our broadcast partners.  We are now one of the best facilities in the Mid-American Conference and the functionality of the system has far exceeded our expectations.”

TeleProductions Producer/Director, Susanne Ketchum supervises the FlashVision student production crew as they produce video and graphics for different events hosted at the MAC Center. Susanne said, “We were working with the bare minimum (before) so there’s just a world of difference.” This upgrade makes the MAC Center comparable to professional sports venues like Quicken Loans Arena, Progressive Field, and FirstEnergy Stadium. Ketchum added, “Having all of this equipment helps us put on the best show we can.”

Deputy Athletic Director, Casey Cegles noted, “It’s pretty neat how what appears to be just a big scoreboard does a lot of other things and helps enhance the game day experience for our fans.” The new video board system in the MAC Center not only improves the atmosphere in the arena for Kent State fans but empowers the FlashVision production crew to deliver a professional in-game show. “To be able to hand students gear that they’ll find in their workplace when they get into the television business,” Jason Forbes remarked, “will be immensely valuable to them.” 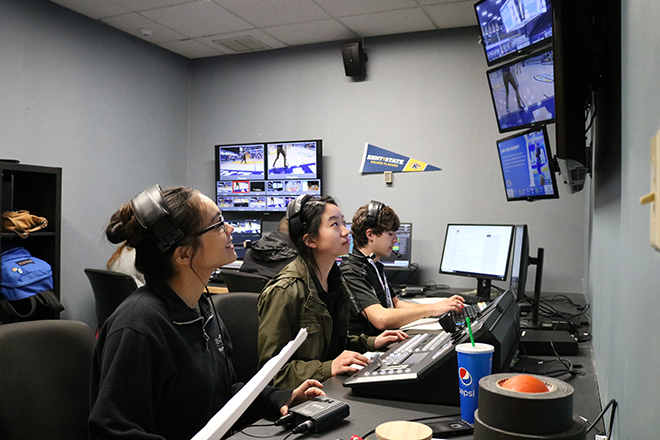