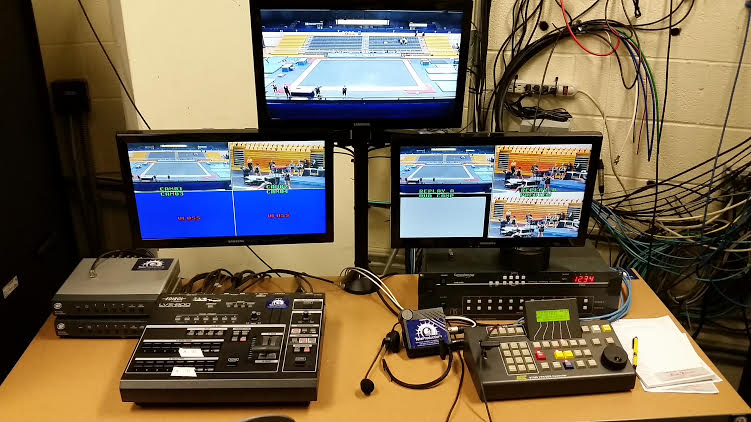 At the Memorial Athletic Convocation Center (MACC) the scoreboards function as much more than just a simple way for fans to view the score. Player introductions, instant replays and other graphics are displayed on the screens throughout any given athletic event.

Fans can now get an even better view of the action thanks to TeleProductions team member’s redesign of the MACC’s scoreboard equipment.

Who’s behind the design?

TeleProductions Engineering Manager Dan Tonelli designed the new system on a whiteboard in his office.

“The actual design only took a couple of hours working on the whiteboard in my office,” Tonelli said. “What took some time was understanding how the system was being used and where its shortcomings were…over the course of a month the system was designed and equipment ordered.”

Tonelli worked closely with Senior Media Specialists Josh Tanner and Jason Forbes, as well as Media Specialist Dan LeBeau. Tanner runs the scoreboard operations for TeleProductions, working almost every sporting event held in the MACC. Forbes and LeBeau worked with Tonelli throughout the design process and installed the new system.

From Old to New

“The need [for a new scoreboard system] came from a couple of different places. Some of the video cabling in the MACC was very old and deteriorating. This had the potential of causing technical issues with our productions,” LeBeau said. “The scope and quality of the production also grew over the years. It required more and more temporary setups for each game, which was taking longer and becoming more complex to manage and troubleshoot.”

By recognizing where the old system had shortcomings, TeleProductions team members were able to start the conversation about what exactly needed to be replaced and what new features could enhance the fan experience.

Going into the project, Dan Tonelli had three major goals: ensure that TeleProductions would be able to continue to meet their obligation to the athletic department without having to rely on connectivity outside of the MACC, to improve the quality of the product that is seen on the video boards and to ensure that any upgrades made by TeleProductions would not interfere with TV-2’s ability to produce athletic events.

All three goals were accomplished with the new system.

The scoreboard operation is now completely self-contained inside of the MACC, giving TeleProductions sports crews control over the end product and a more reliable system. Prior to this upgrade, the system was not self-contained which gave outside sources control over the end result and made TeleProductions dependent on outside sources. Video switching and replay systems have not been inside the MACC until this upgrade.

Camera cables were replaced with HD rated video cables, making noticeable improvements in the quality of the videos being displayed on video boards. Along with having a quiet location to organize and direct productions, directors can now see all of their cameras before cutting to them. By installing three monitors and multi-view screens, directors can now see every angle being captured by TeleProductions cameras. This allows directors to use the best shot for an instant replay or other on-screen features.

Extra pieces of equipment were purchased to ensure TV-2 could still produce successful segments. Connectivity back to Franklin Hall was kept in tact, something Tonelli said TeleProductions went the extra mile to ensure happened.

“We have developed a good partnership with the TV-2 sports operation over the past few years and it was important that they be able to continue covering events in the MACC as they have in the past,” Tonelli said.

The new system was first used on Feb. 4, 2015. New cabling not only improved the picture quality seen by the fans, but caused less technical issues for the TeleProductions sports crews – improving the flow of the production.

In-house replay capabilities allowed TeleProductions to let fans catch a piece of action immediately after it occurred, making sure every single play can be seen by spectators.

“I think that the new system shows our dedication to continued improvement, which is a point of pride within our department,” Dan LeBeau said.

Not only did the system upgrade assist the TeleProductions team, but also improves the overall fan experience in the MACC.