The sixth annual Rainbow Run fundraising “fun run” will take place on Friday, October 8 at 7 p.m. on Kent State’s Risman Plaza. All proceeds from the event will benefit the university's LGBTQ+ Emergency Fund.

The Rainbow Run is one of most important fundraising events of the year for this fund that’s available to assist any Kent State student who identifies as LGBTQ+ and is in financial crisis. 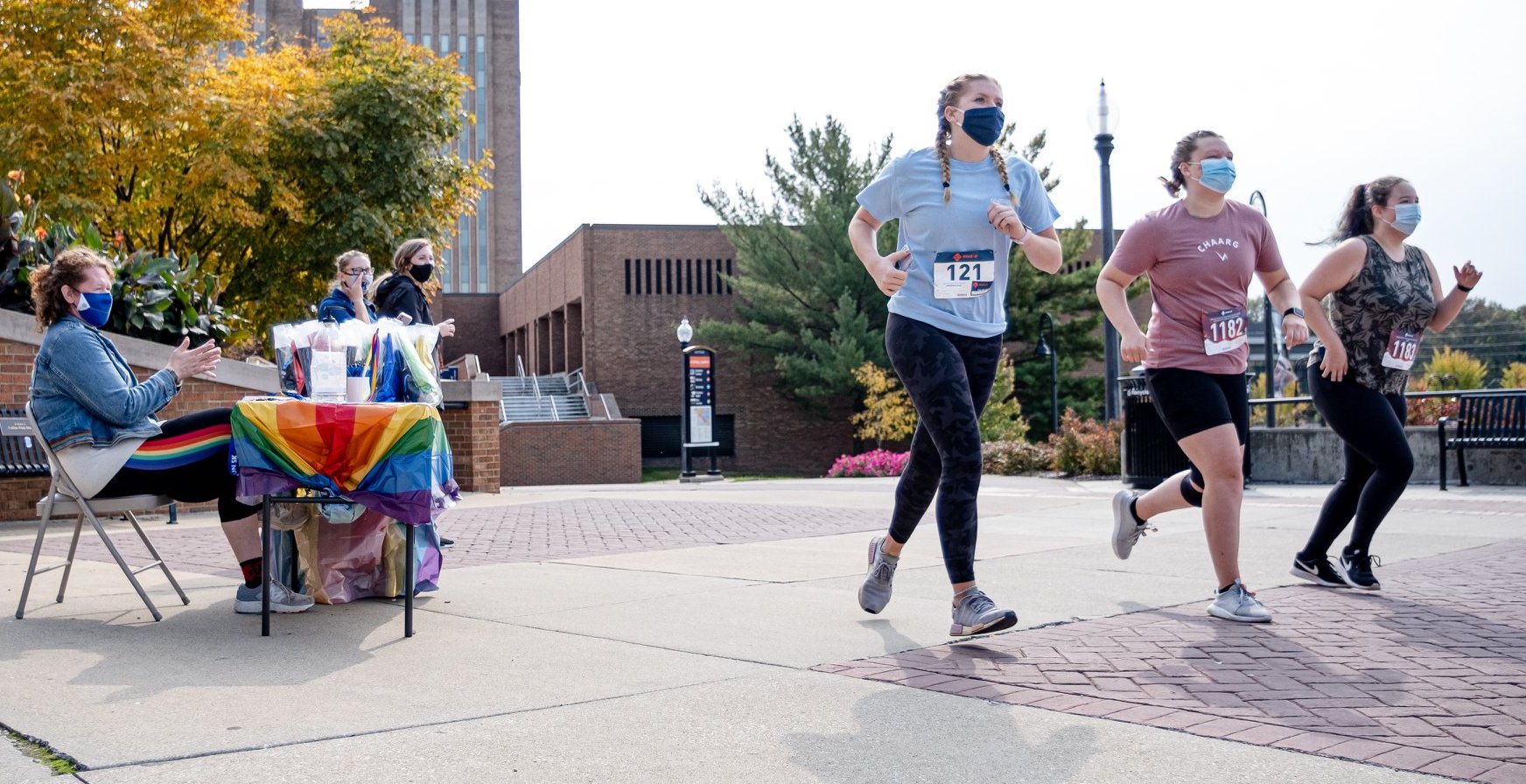 This fund, started in 2010, is managed through Kent State’s LGBTQ+ Center. Ken Ditlevson, director of the center, describes the fund as a vital safety net, a lifeline for students who are struggling financially. This fund is available to students throughout Kent State’s eight-campus system.

Ditlevson meets with all of the students who request funds. The stories he hears he describes as “heart wrenching.”

“I feel so much for our students and what they’re going through,” Ditlevson said. “Around half of our students requesting funds have been disowned from their families because of their sexual orientation or gender identity. That’s really rough to hear. Families that have completely turned their back on their students, eliminating financial support and expecting these students to try to figure that out on their own.”

“I was so grateful for Ken and the LGBTQ+ Emergency Fund to assist with my books and some household expenses. Thank you for helping me. You all have been the family I needed throughout my journey,”
“H,” Graduate student

Kent State is one of only a few schools nationwide that offer this kind of fund to support members of the LGBTQ+ community. This support is making a real difference in the lives – and the education – of Kent State students. This year, Ditlevson looked back at the students the fund has helped over the past seven years. The research showed that 81 percent of those students were able to continue their education at Kent State.

“We use this fund to assist students with both their immediate needs and needs that might prevent them from continuing or finishing school,” Ditlevson said.

“I’m graduating in a few months with a Bachelor’s degree in psychology. This would not have been possible without the Emergency Fund. I was able to finish paying off an outstanding balance with the help of the fund. I honestly don’t know where I would be without it.“
“J,” International student

Any student that identifies in the LGBTQ+ can apply for assistance from the fund. All they need to be eligible is to have completed at least one semester at Kent State. “It’s an easy process,” Ditlevson said, “which I am thankful for. When someone is in crisis the worst thing to do is make them have to navigate to find verification and documents.”  Ditlevson personally meets with the students who apply, and if they qualify, he is able to immediately transfer the funds into their bursar’s account.

“They treated me like a person, rather than a problem, even though, I, myself felt like I was burdening others. I want to pass on that kindness and compassion however and whenever I am able. My sincerest and humblest thanks to the LGBTQ+ Center and all who donate to the very necessary Emergency Fund.”
“A,” Graduate Student

In those interviews, Ditlevson speaks with students who have been disowned, students who are now homeless and students whose parents have threatened them with physical harm if they come home. “Other students are told that ‘Kent State is making you gay, trans or lesbian, and we’re not going to support Kent State because of that,’” Ditlevson said.

“And you know that’s the furthest thing from the truth,” said Ditlevson. “At Kent State, we believe in embracing our students for who they are and loving them for who they are.”

The financial situations of these students are made even more dire when they have to fill out an annual FAFSA (Free Application for Federal Student Aid) form. If those students’ families refuse to do that paperwork, those students are blocked from scholarships and loans.

The Rainbow Run is the main fundraiser for the LGBTQ Emergency Fund, which is also supported by generous donors and annual donations from alumni, faculty and staff.  The event was created by Blake Kinsel student intern who was working in the LGBTQ+ Center. Kinzel graduated from Kent State, attended medical school and is now a resident physician of family medicine at The Cleveland Clinic.

“Last year, we invited Blake back to see the results,” said Ditlevson. “We’re in the sixth year of the event he created, and that event has raised thousands of dollars, all of which has gone to help students be successful. I’m super proud of him and super proud that the Rainbow Run has continued to grow every year.”

In the future Ditlevson sees expanding this emergency fund, or funds like it to assist other in other areas of need for international students, students of color and non-traditional parents who are back in school while raising children.

“People who are part of marginalized groups have so many more adversities and challenges to face. These emergency funds can make this differencing between staying in school, taking a break or dropping out, “ Ditlevson sai. “So if we can say that more than 80 percent of students receiving this assistance are progressing or reaching graduation, it tells a really compelling story for donors or anyone who wants to invest in our students’ success.”

Anyone who wants to donate to the LGBTQ+ Emergency Fund can do so through the “Donate” link at www.kent.edu/lgbtq.