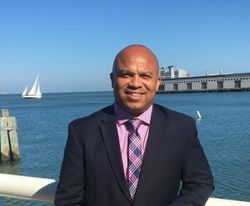 Kent State University alumnus Andre Knott’s experience in journalism ranges from sideline reporting for the Cleveland Browns to telecasts for the Cleveland Indians on SportsTime Ohio to covering Cleveland sports on the radio. Now, he joins WJW FOX 8 as a new contributor to the station’s sports team. He will provide reports, features and live coverage of Cleveland sports on all FOX 8 platforms while he continues his Cleveland Indians broadcast work at SportsTime Ohio.

The accomplished journalist went to high school at Akron’s St. Vincent-St. Mary and was an All-Ohio running back and a four-time letter winner in baseball. He continued playing football in college for the Golden Flashes while studying journalism.

Knott said that Kent State played a pivotal role in his success.

“Kent State helped me find my voice and gave me the encouragement to believe in myself to achieve whatever dream I had,” Knott said.

The Akron native is a five-time Emmy winner for his work on Indians broadcasts. He also hosts the popular “The A to Z Podcast” with Zac Jackson, a Cleveland Browns writer for The Athletic whose mom, Chris Jackson, teaches part time in Kent State’s School of Journalism and Mass Communication. Knott is also married to a Kent State alumna.

Read more about Knott’s work and his new position with FOX 8’s sports team at www.cleveland.com/entertainment/2019/09/andre-knott-joining-channel-8-sports-team.html.