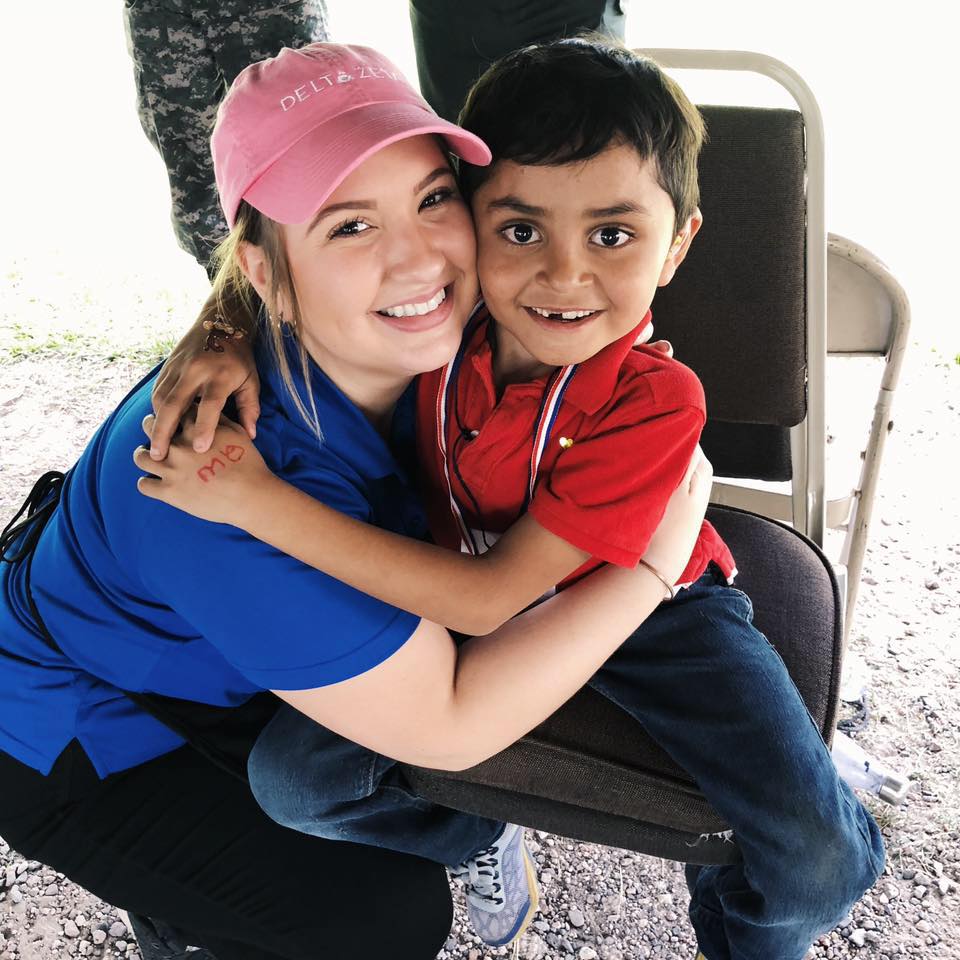 Many people travel for relaxation, some travel for work, but Erica Dovin traveled to help give the gift of hearing to impaired children.

Ms. Dovin, a sophomore speech pathology and audiology major, received a rare opportunity to travel to Honduras to provide much needed assistance while gaining valuable experience at the same time.

Ms. Dovin was one of 10 Delta Zeta sorority members from across the country who received the opportunity to travel to Honduras as part of the Starkey Hearing Foundation’s Heart for Hearing contest.

Heart for Hearing is the sorority’s national philanthropic program, through which the sorority’s chapters across the country raise money for speech and hearing services. More than 100 members’ names were thrown into a hat to be chosen for the trip. Ms. Dovin was announced last spring as one of the women selected to embark on the mission.

The group flew to Honduras on Nov. 2, and the experience left meaningful impressions, beginning with the travel, Ms. Dovin said.

“We were escorted by the military everywhere we went for safety reasons,” she said. “They would drive in front and behind us to stop or move traffic, that way we were able to get to our destinations in a timely manner.”

Ms. Dovin also was struck by how closely she was able to pair her philanthropy with her academic field throughout the mission. Her role on the trip was to fit patients for hearing aids. By the time patients reached her for care, they already had had their hearing tested, ears cleaned and molds for their hearing aids created.

Despite hot weather, the Honduran locals went to great lengths to be able to receive the care and hearing aids, some even traveling by foot as long as five hours to receive the gift of hearing, Ms. Dovin explained.

Some patients, she said, seemed nervous and unsure about what to expect, and depended on their families for support.

Ms. Dovin was impressed by the locals willingness to depend on the group from Heart for Hearing for help, and she, in turn, had to rely on others for translation help.

“Today, many people are afraid to depend on anyone; their friends, family, and significant others,” Ms. Dovin said. “But on this mission, dependability had one of the biggest roles. The patients depended on their families. I depended on my translator to communicate with my patients, so I could learn their backgrounds and to know if the hearing aid was too quiet, or too loud.”

The patients, who ranged in age from three to 94, each had a different story, Ms. Dovin said. Through the hustle and bustle of work on the mission site, Ms. Dovin said she still managed to find time to bond with her patients.

“I had a 40-year-old woman who had never heard in her life before, an eight-year-old boy who could only hear loud noises next to his ear, an elderly man who lost his hearing at work,” Ms. Dovin said. “They were so grateful for us donating our time and traveling from America.”

Some patients were more memorable than others, she explained. For instance, a teenage boy who was born deaf received his hearing aids on his sixteenth birthday, allowing him to hear “Feliz Cumpleanos” (Happy Birthday), for the first time in his life.

“He was smiling from ear to ear because this was the first time he heard happy birthday sung to him,” Ms. Dovin said. “Everyone in the area stopped what they were doing to join in, and made this moment special for this young boy. This really touched my heart because ‘Happy Birthday’ is just another song to some, but will forever mean so much to this boy.”

Ms. Dovin said the Honduras community members will always hold a special place in her heart, and she loved seeing how overjoyed they were when receiving their hearing aids.

“I have learned to appreciate the little things,” Ms. Dovin said. “Hearing aids are nothing to Americans, people already have them. The people in Honduras had no resources to get hearing aids, no opportunities for a better life. A simple tool changed their life.”

For more on the Delta Zeta Gamma Kappa chapter at Kent State, go to www.kentstatefsl.com/delta-zeta.