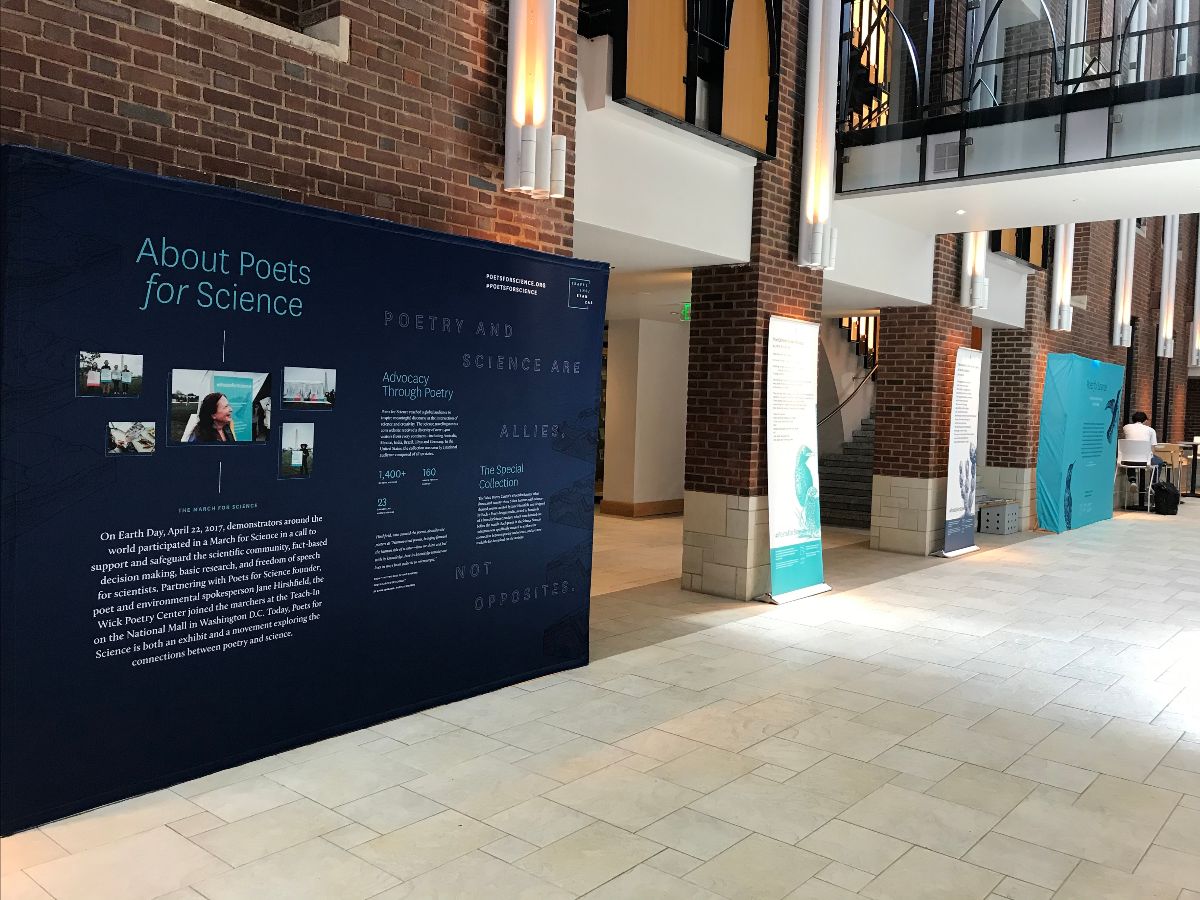 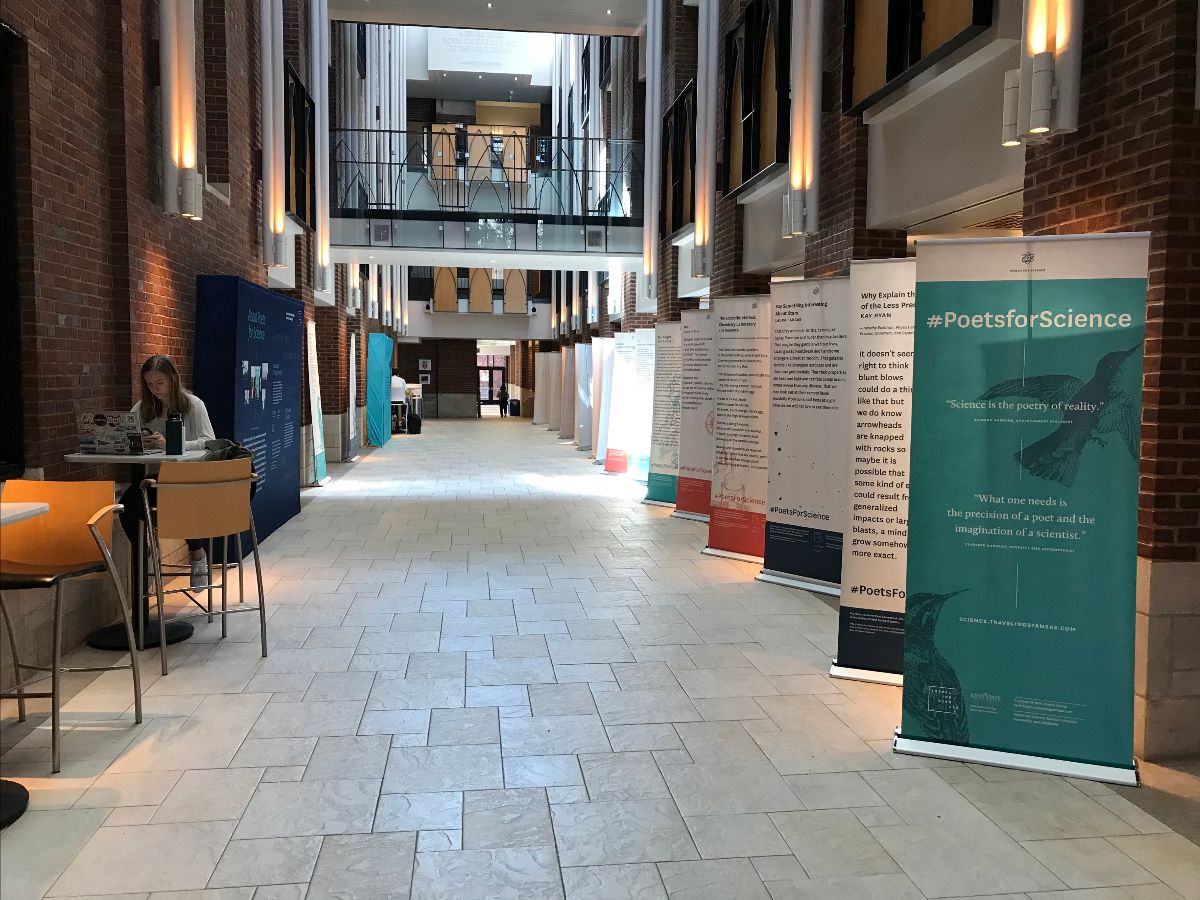 Poets for Science at Vanderbilt University

During this time of crisis when we must rely on accurate, science-based information regarding the Covid-19 pandemic, the Wick Poetry Center would like to share news of the Poets for Science exhibit which traveled to Vanderbilt University during the first week of February.

Founded by poet and environmental activist Jane Hirshfield, the Poets for Science movement collaborated with the Wick Poetry Center to launch this exhibit at the March for Science on the National Mall in 2017. Featuring 25 poems curated by Jane Hirshfield, this exhibit offers interactive stations where visitors create poems from science-based texts. Visitors can also contribute a line to a community poem, modeled after Gary Snyder’s, “For All.” 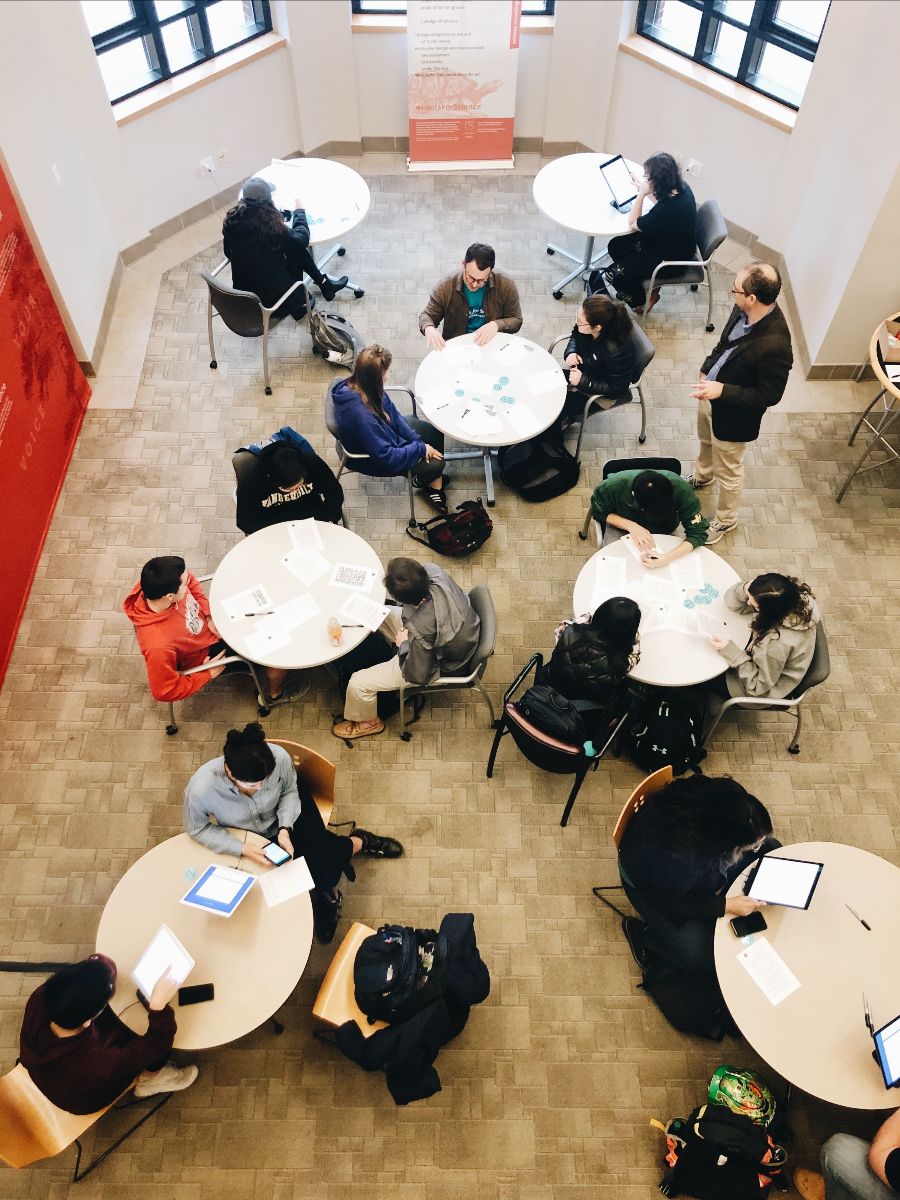 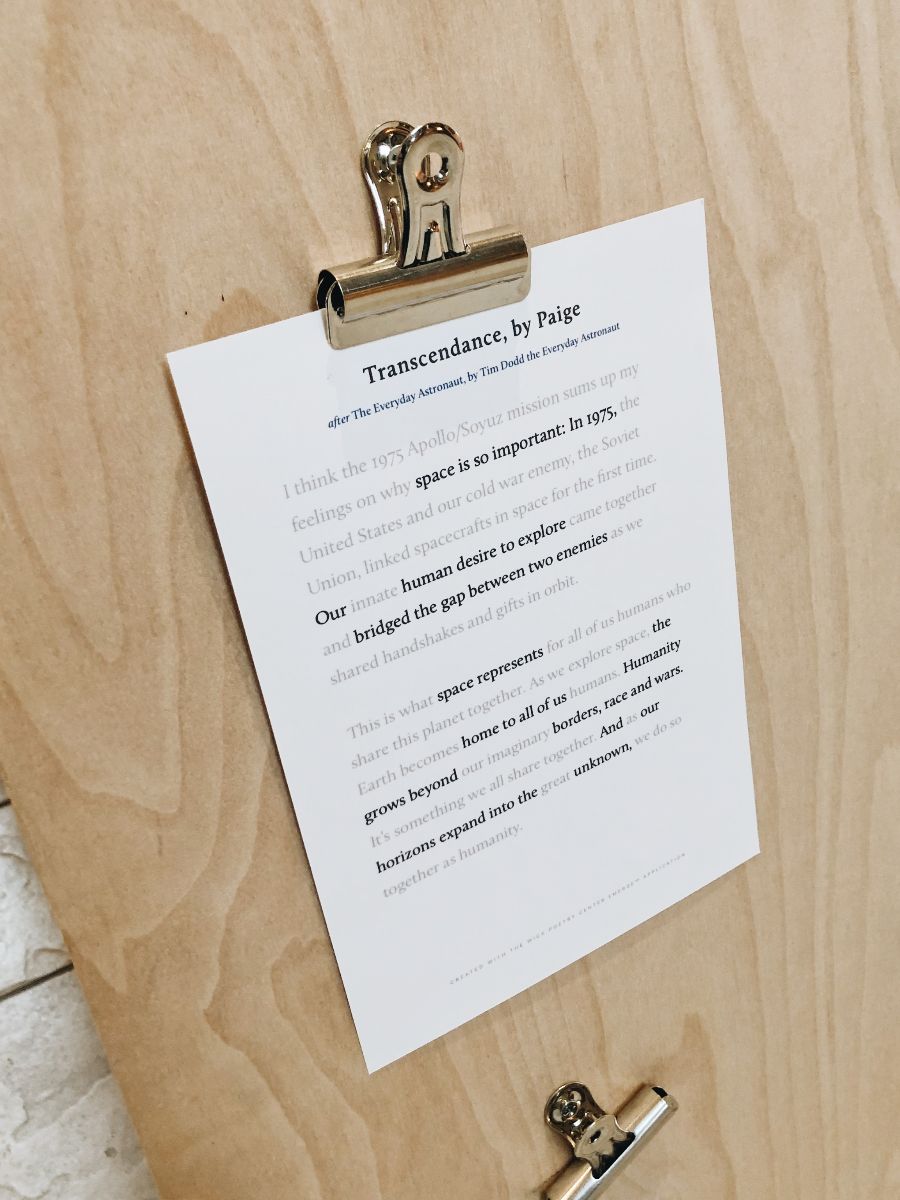 Charles Malone, outreach and program manager of the Wick Poetry Center, spent three days with Vanderbilt’s Communication of Science and Technology program, assisting exhibit visitors with the interactive exploration of the intersection of poetry and science. “It was a joy to share the conversation that Jane Hirshfield began at the March for Science in 2017. They responded to the narrative of working scientists discussing the importance of their work through our Emerge application,” said Malone.

Below are examples of poems created by visitors to the gallery using the Wick Poetry Center’s Emerge™ application: 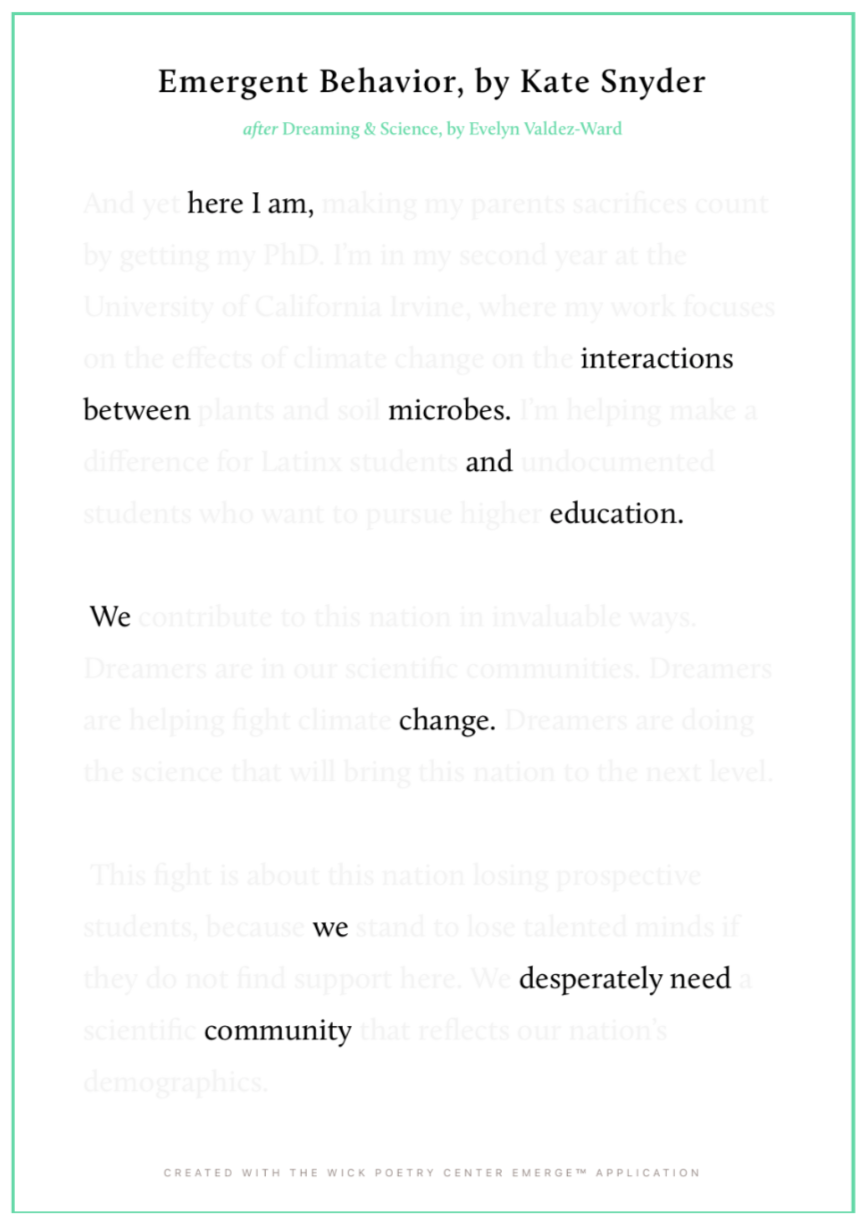 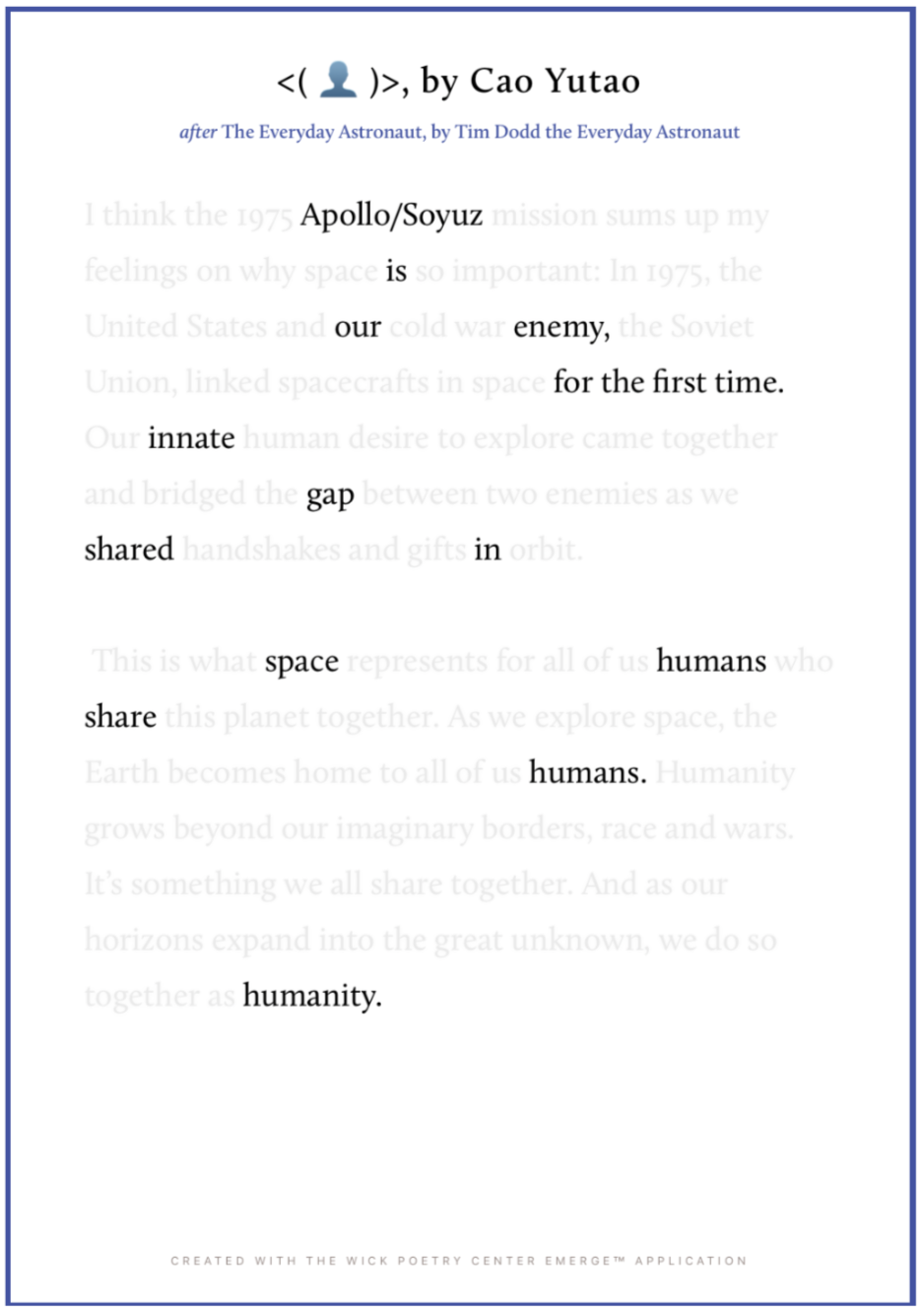 During the exhibit, visitors also had the opportunity to contribute to a Thread community poem.

Said Malone: “One of my favorite contributions to the Thread was by a student named Adora. The prompt asks us to pledge to something in our fields that is important to us. Gary Snyder’s poem uses the form of the Pledge of Allegiance, which he spins to express his connection to the soil and animals, to the diversity and ecology of the place where he lives. Adora first simply pledged to the name of her field, Psychiatry. But then she made an inspired poetic decision to show us what Psychiatry means to her. She wrote:

‘I pledge to my innermost thoughts

and the marvelous wonders of the mind.

Insufficient would it be to pledge

and not vow to be ambitious

in my endeavor to expand

my knowledge of self

in my ability to do as such.’

Another student, Molly, offered these lines:

‘I pledge allegiance to cosmology,

to our place in the universe,

to what dwarfs us and makes us look up

to the bigger-than-me, to the gorgeous system

of which I am an infinitely small subset’.

It was remarkable to see how participants responded to these ideas and these tools for conversation.”

Co-presenter and Kent State University undergraduate student, Samantha Horwitz, was able to connect with another student that shares her same love for science and creative writing after her reading of theThread community poem.The two were able to engage in the deep and philosophical ideas of pedagogy, and discussed their frustrations of chemistry lab instructions.

Horwitz recalled, “We talked about the frustration with instructions on lab reports that say things like ‘no metaphors,’ when the very best science teachers use metaphors to get across the most abstract ideas. From the humanities standpoint, I think that poets also employ a lot more problem-solving and analytical techniques than they might originally think.” 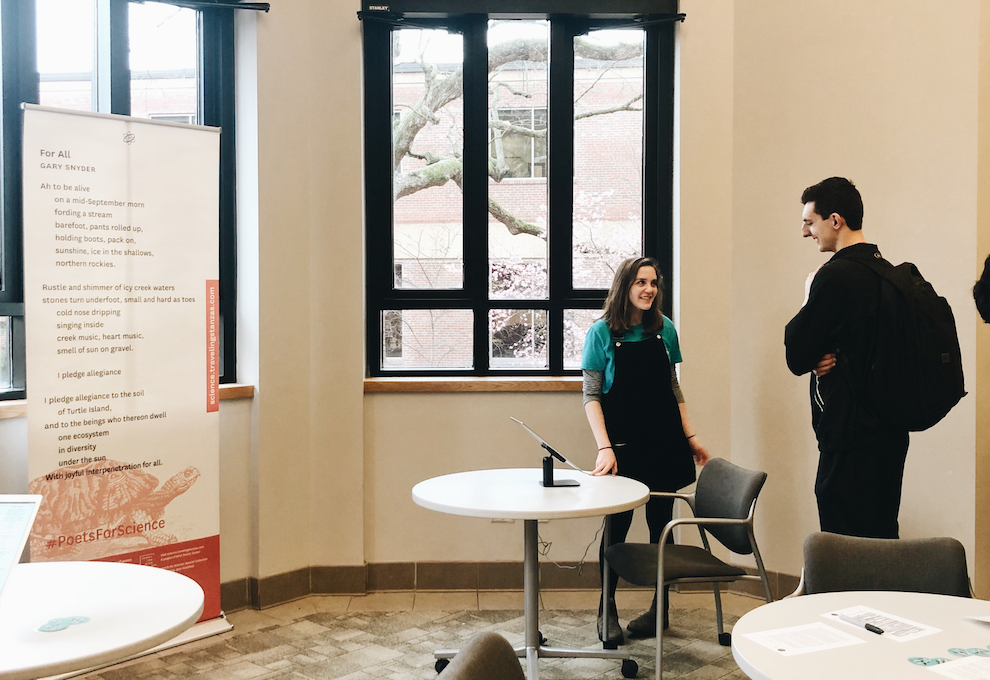 Malone and Horowitz also participated in a panel discussion facilitated by Vanderbilt Dean David Wright with Austen Applegate from the National Academies of Science Engineering and Medicine, Dr. Jay Clayton from the English Department, Dr. David Wientraub, director of the Communication of Science and Technology program, and Professor Kate Daniels, Director of Creative Writing at Vanderbilt.

The ultimate synergy between artists and scientists captured the core values of the Poets for Science movement, as expressed by founder, poet, and activist, Jane Hirshfield. She writes, “Poetry and science each seek to ground our lives in both what exists and the sense of the large, of mystery and awe. Every scientist I know is grounded in curiosity, wonder, the spirit of exploration, the spirit of service. As is every poet.”

Please check out the following links for more information about the Poets for Science project:

Responses to the "I Pledge Allegiance" Thread Prompt

Vanderbilt Community Poem: "I Pledge to the Big, to the Small"

No Metaphors in Lab Reports: Essay by Samantha Horwitz