Although we later met during a clinical rotation in the college of nursing we first noticed each other the summer after freshman year while working on campus. Adam as a tour guide and Amanda for the Pass program. Every afternoon Amanda would walk across Rizman Plaza towards the end of Adam’s first tour where they would cross paths everyday. Although this was where we first noticed each other it wasn’t until the following semester that we formally met during a clinical rotation. We did not start dating until after graduation and 9 years later Adam proposed at Rizman plaza where the attraction first began.

Adam surprised Amanda one day after work and drove her to Kent State’s campus and directly to Rizman’s Plaza where it all began. Dropped to one knee and asked her to marry him. Shortly after a campus tour walked right by where they first recognized each other while Adam was a tour guide. Isn’t it ironic.

How Adam and Amanda Remain Connected to Kent State

We visit campus periodically and Amanda is enrolled in a doctorate program in the college of nursing. 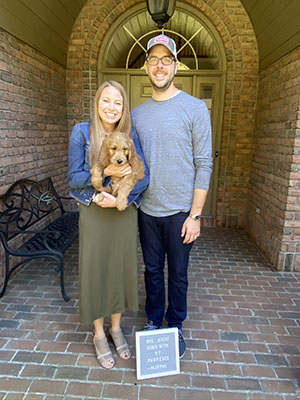