I was hired by my future wife to DJ a Punk Party at Prentice Hall. I was a Telecomm major and a DJ of some ill-repute working Thursday's Rockn' Roll night at the Crazy Horse and doing side jobs whenever I could liberate the sound gear from the audio room in the Music & Speech building without permission. (This is between us, right?) Unbeknownst to me, I was referred to the (former) Teresa Blubaugh by her matchmaking RA (Sharon Ivansic) who was a fellow Telecomm major of mine. When I was setting up for the party, my future wife offered me a beer which I declined claiming I was a 'professional.' (In my defense, I was trying not to get drunk before the party!) Years later I found out that when she saw me later that evening I was talking to one of her 'friends' with a beer in my hand and she was not happy. Her frustration in fact lead to the second time she hired me to DJ the new front council's year-end picnic. My second chance with her went way better than the first as she was determined to talk and flirt - not necessarily in that order and I was smitten. Fun Fact on this story: I never got the $50 dollars promised, but of course the job was priceless!

We started dating after right that and never looking back.

The proposal took place in Atlanta, Georgia. I had moved there to start a TV career at CNN. She moved to Atlanta a year later to start her Nursing career. I proposed in her apartment in Midtown after walking around for an hour trying to get up the nerve. She was walking and wondering what the hell we were doing out so late and when it started to rain we headed to her apartment. Shortly after that we both got jobs back in Ohio, moved back and were married in 1987.

How Tim and Teresa Remain Connected to Kent State

Facebook mostly. My wife still keeps in touch with most of her Kent State posse. There are actually quite a few Kent State grads working in media in Ohio that I stay in touch with. A cool connection for me now that I teach media in high school is I send a lot of my high school grads to JMC! Finally, and probably the biggest connection to Kent State we have together as alums is our daughter now attends Kent State studying Sports Medicine. The full circle of our KSU love story came around last fall when we moved her into Clark Hall - in a room on the 4th floor exactly six doors down from the room where I took that call from my future wife! 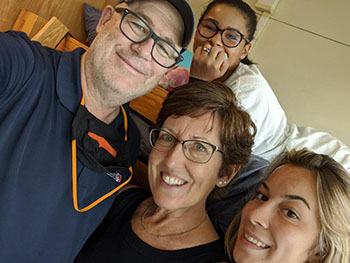