Our Story
Although we both lived in Tri-Towers at the same time (1999-2000) and shared the same group of friends during college, we didn't meet until KSU's Homecoming in 2004. I was in town visiting my family in Cleveland and decided to stop in Kent to have dinner with my brother on my way back to Columbus, where I lived at the time. After realizing it was Homecoming weekend, I decided to hang out in Kent with my college friends for the night. Similarly, Courtney's college friends convinced her to hang out for Homecoming weekend. When our friends met up, Courtney and I officially met for the first time, where fate brought us together. The rest is history!

The Proposal and Marriage
I was planning on proposing on top of Mount Mitchell in North Carolina, the highest point east of the Mississippi River, while visiting my family that same New Year's Eve, just over two months after meeting because I knew when I met her that we were meant to be together! I drove to Tiffany & Company in Cincinnati while I was still living in Columbus to purchase her original engagement ring. After finding out that Mount Mitchell was closed to vehicle traffic due to winter conditions, as well as wanting to propose close to home, I decided to propose in downtown Kent. After a family gathering for Christmas on December 26th, I decided to take Courtney for a ride through campus and then for a walk through 6 inches of snow in Franklin Mills Riveredge Park along the Cuyahoga River. When we arrived at the observation deck overlooking downtown Kent where we met, I dropped down on one knee and made my proposal. Courtney laughed at first in shock, but quickly said yes. Although we had been together for only 2.5 months, we were engaged for 1.5 years until we got married on May 27, 2006. We now have been married for almost 7 years and have two beautiful children together. I work as the Outdoor Adventure Coordinator at Kent State University, and Courtney works as a Radiology Coordinator for Akron General Medical Center. We reside in Brimfield.

Staying Connected to Kent State Today
Since I work at Kent State University, I am on campus every day. In our leisure time, we regularly attend athletic events and have been attending Homecoming weekend events since we meet in 2004. We also both work with current KSU students in preparing them for employment in our respective fields of recreation and radiology. 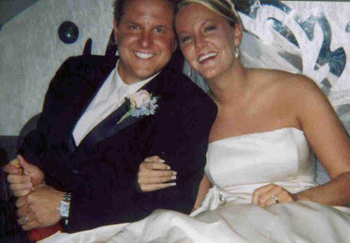