Aggressive behavior in animals may result in posturing, teeth baring or challenges related to protecting territory, offspring or food. In humans, it can lead to violence and death, and the causes are not always readily apparent. But where does it originate? 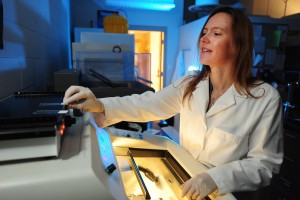 One path to the origins of aggression is in the brain, where neurobiologists study the role of hormones on behavior. That is the broad focus of research being undertaken by Heather Caldwell, Ph.D., associate professor of biological sciences at Kent State University, in a project funded by a new $400,000 National Science Foundation (NSF) grant.

Her study will identify “the timing window in which oxytocin signaling helps to organize the neural circuits that underlie male aggressive behavior.”

This study will be the first to look at the prenatal and possibly fundamental role for oxytocin in the development of adult aggressive behavior. Very little is understood about the developmental origins of such behavior, or indeed, most behavior, according to Caldwell, because of the challenges of studying the brain. New technologies in brain imaging and the development of “knockout” and other types of genetically modified laboratory models have opened new possibilities for research.

Caldwell’s research team for the three-year project will include a Ph.D. student in biomedical sciences and a research technician. A recently graduated master’s degree biology student did initial work on the project, and four to six undergraduates regularly work in her laboratory.

For more information about research at Kent State, go to www.kent.edu/research.

Photo Caption:
Heather Caldwell, Ph.D., an associate professor of biological sciences at Kent State University, was awarded a $400,000 National Science Foundation grant to study how oxytocin’s role in early brain development may be linked to aggressive behavior in adults.