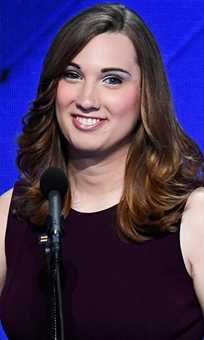 Sarah Mc Bride is the National Press Secretary for the Human Rights Campaign. Sarah is a transgender activist and the first openly trans person to address a major political party convention at the DNC in 2016.

McBride worked in the White House Office of Public Engagement and Intergovernmental Affairs, where she worked on LGBT issues. In January 2013, McBride joined the board of directors of Equality Delaware and quickly became the state's leading advocate for legal protections and hate crimes legislation for transgender Delawareans.[5] McBride and her family led the lobbying effort for legislation protecting Delawareans from discrimination on the basis of gender identity and expression in employment, housing, insurance, and public accommodations.[16][17] In addition to serving as the primary spokesperson for the legislation, McBride's close relationship with Governor Jack Markell and Attorney General Beau Biden was credited with getting both elected officials vocally behind the bill.

Sarah is the author of Tomorrow Will be Different: Love, Loss and the Fight for Trans Equality.