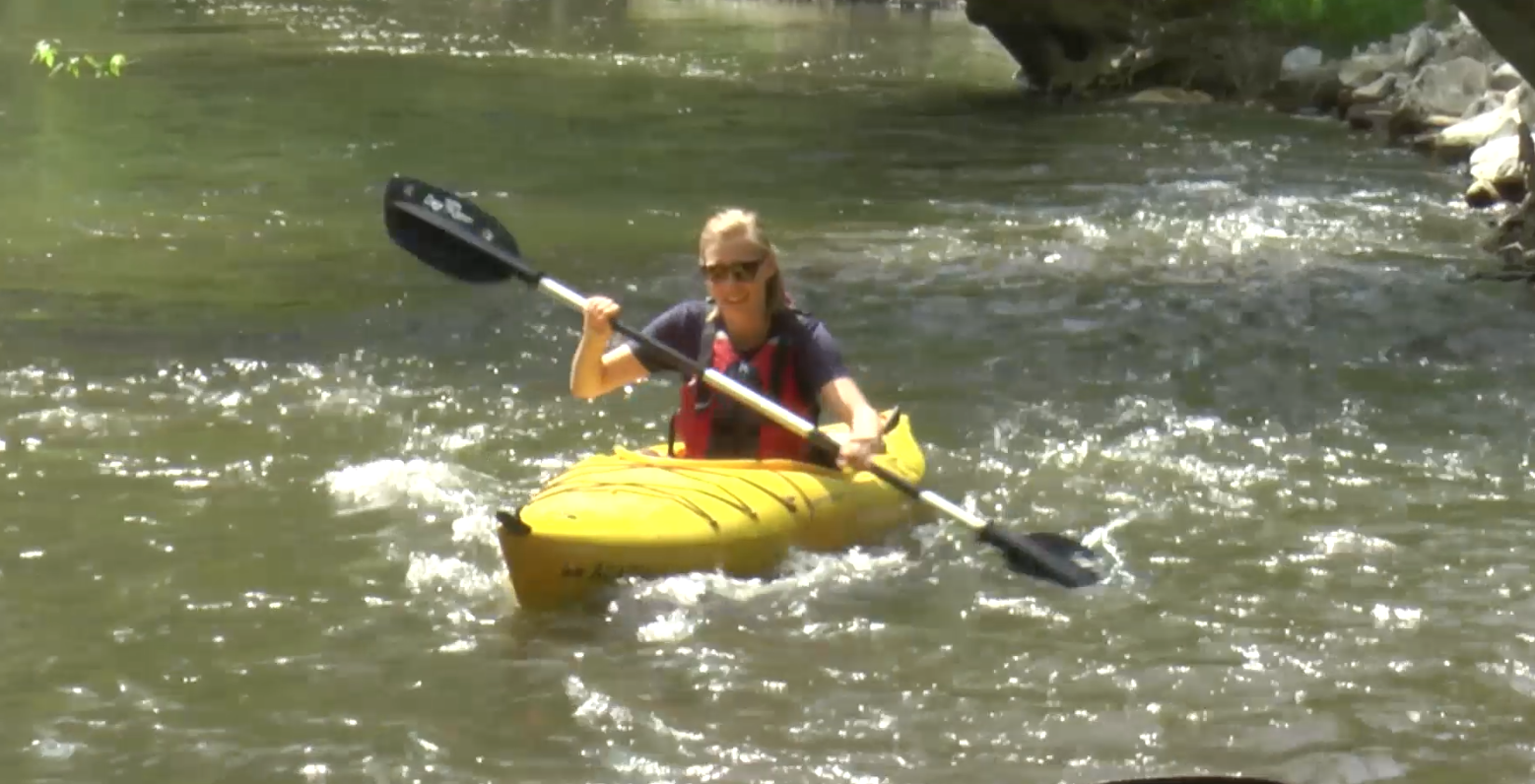 Paddling Partners Team Up Along the Cuyahoga River

“We’re going to go over a basic forward stroke,” a voice calls out from the sun-soaked banks of the Cuyahoga River in Tannery Park.

With a paddle in hand, Erin McNamara demonstrates how to steer a kayak through flowing river waters. McNamara is a senior at Kent State University and a guide for the university’s Crooked River Adventures, a canoe and kayak livery in downtown Kent, Ohio.

Every spring, for the past six years, Crooked River Adventures has opened its trailer - filled with canoes, kayaks, tubes and stand-up paddle boards - to customers for guided tours up to six miles long.

Paddling is one of the fastest growing outdoor recreational sports around the country.  Few universities are located so close to a river to offer the sport, and even fewer partner with the city where it resides. This unique relationship between the university and the city of Kent attracted Blake Osborn to move from his hometown of Nashville, Tenn., to accept the position as program officer for Outdoor Adventure in Kent State’s Department of Recreational Services.

“It’s actually one of the first times I’ve seen something like this available within a five-minute walk from downtown,” Osborn said. “Usually it’s out, two hours into the forest and not as accessible, so it’s pretty neat that this is right here in Kent.”

Osborn is gearing up for a busy season as the Cuyahoga River continues to experience a rebirth. According to the National Park Service, the river was once one of the most polluted in the country, filled with a century of dumped factory and sewage waste. In 1969, oil-soaked logs and other trash caught fire in the Cleveland area.

After decades of clean-up efforts, and the removal of two dams restricting navigation on the river through Kent and Munroe Falls, the river supports a strong ecosystem and growing livery through Crooked River Adventures - attracting students and customers from all around the state and beyond.

“It’s thrilling, it’s fun,” said Haley Keding, a senior and guide for Kent State’s Crooked River Adventures. “The water is a little cold, but that’s ok. It’s worth it, especially in the warm heat we have throughout the summer.”

The cleansed Cuyahoga, combined with the rising popularity of paddling, is reflected in the positive perception of the sport on the Cuyahoga River. Andrew Lepp, Ph.D., associate professor in Kent State’s College of Education, Health and Human Services, studied who is paddling the Cuyahoga and what motivates them to continue.

As far as motivation, Lepp’s research discovered four reasons why people paddle the Cuyahoga - from enjoying the river, nature and peace - to learning about the environment and nature – spending time with family and others who share the same interest – and taking on a challenge and staying physically fit.

The research is helping to provide a clear picture as to what is sparking the river’s growth of paddling and why it appears to be getting more specialized and rewarding. It is also helping to further build a unique relationship between Kent State, the city of Kent and the Cuyahoga Valley National Park.

McNamara and Keding are relatively new to the sport. Neither one had done much paddling before they started working for Kent State’s Crooked River Adventures.  However, during their training, they have developed a love of the sport and a strong desire to share it.

“I find myself just wanting to go to different spots and paddle on my own, even when I’m not at work,” McNamara said.

“Just try it,” encouraged Keding. “It could become a passion for you as well.”