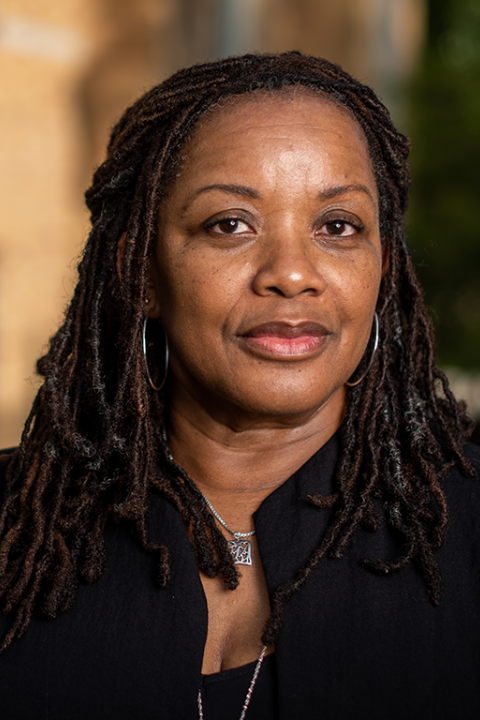 Amoaba Gooden, Ph.D. is the Vice President for the Division of Diversity, Equity and Inclusion. She previously served as the chairperson of the Department of Pan-African Studies at Kent State University for nine years.

Gooden’s collegiate journey started at the University Guelph in Toronto, Ontario, where she received her bachelor’s and a master’s degree in history. Shortly thereafter she earned another M.A. in African American Studies, a certificate in Women Studies and her Ph.D. in African American Studies from Temple University. Since then, Gooden has used higher education as a pathway to drive community mobilization and change for racialized and underserved populations.

Gooden’s love for history pushed her to become both a researcher and professor. In the same way, her passion for social justice and social change drives her to explore and speak out about the life experiences of People of African descent and other marginalized and underserved groups. This charge started at the age of 10, when Gooden read a book about Harriet Tubman. Since then, she was always inspired to follow the footsteps of Black liberators, helping oppressed communities find their way. Gooden’s research and teaching interests are focused primarily on migration, identity, barriers to health and health promotion.

Gooden’s works have spanned outside of the nation’s border to include her country of birth, Jamaica, as well as her country of citizenship, Canada. Gooden has worked as a researcher and project coordinator in health promotion for immigrant and Black women at the University of Toronto and community health centers. She has also constructed academic research publications covering immigrant women’s health promotion, African-Caribbean community building, gender and sexual identities in Ghanaian societies, the African Canadian experience and more.

Overall, Gooden’s academic and professional work continues to highlight the narratives and cultural structures of people of African descent and aims to broaden this platform. She is a catalyst for equitable change for disenfranchised people nationally and internationally. Her professional pursuits in the U.S. and Canada have given her a unique perspective and approach to mobilizing social justice. Gooden aims to continue ongoing learning and curate student success while eventually becoming a full professor at Kent State University.