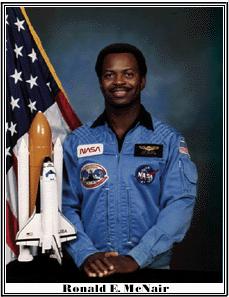 One of America’s first African American astronauts, Ronald Erwin McNair was born October 21, 1950 to a struggling family in racially segregated Lake City, South Carolina. Even as a child, he refused to accept second best. A star athlete, honor student, skillful musician and karate champion, he set a goal of getting his Ph.D. within 10 years of graduation from high school.

In addition to his academic achievements, Dr. McNair received three honorary doctorate degrees, as well as numerous fellowships and commendations. These distinctions include:

Following graduation from MIT in 1976, Dr. McNair became a staff physicist with Hughes Research Laboratories in Malibu, California. His assignments and research included:

Selected as an astronaut candidate by NASA in January 1978, he first flew as a mission specialist on STS 41-B, which launched from Kennedy Space Center, Florida, on February 3, 1984. The flight accomplished the proper shuttle deployment of two Hughes 376 communication satellites, as well as the flight-testing of rendezvous sensors and computer programs. This mission marked the first flight of the Manned Maneuvering Unit and the first use of the Canadian arm (operated by McNair) to position EVA crewman around Challenger’s payload bay. Included were the German SPAS-01 Satellite, acoustic levitation and chemical separation experiments, the Cinema 360 motion picture filming, five Gateway Specials, and numerous mid-deck experiments – all of which Dr. McNair assumed primary responsibility. With the completion of this flight, he logged a total of 191 hours in space.

Dr. McNair was assigned as a mission specialist on STS 51-L. Dr. McNair died on January 28, 1986 when the space shuttle Challenger exploded 1 minute and 13 seconds after launch from the Kennedy Space Center. After his death, members of Congress provided funding for the Ronald E. McNair Post-Baccalaureate Achievement Program to encourage minority, low-income and first generation college students to expand their educational opportunities and pursue graduate studies.

This program is dedicated to the high standards of achievement inspired by Dr. McNair’s life. In his brief but brilliant career, he proved that neither poverty nor discrimination could defeat a determined individual. The program that carries his name seeks to equip its students, as he was equipped: with knowledge, faith, courage, and an unshakable will to succeed.