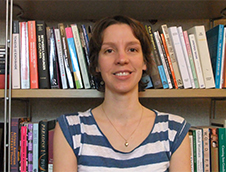 Recent events in Ferguson, Baltimore, Charleston and across the country have caused me to feel that a deeper engagement with race is urgently needed in the classroom. Studies show that while millennials largely believe in racial equality, they are also generally very uncomfortable about discussing race. My goal for the NEH Institute was to design a lesson where translation could be used to provide a “safe” context for talking about race while also pushing students past their comfort zones. The lens of translation also allows for an exploration of race as a social construct that differs by language, culture, and historical context.

My presentation used the novel Comment faire l’amour avec un Nègre sans se fatiguer by Haitian-Canadian writer Dany Laferrière and its translation How to Make Love to a Negro by David Homel as a case study. The novel, which chronicles the life of a black immigrant to Montreal who enters into a series of sexual relationships exclusively with young white women from the Anglophone minority, exaggerates stereotypes in order to explode them from the inside out. My presentation highlighted a passage where sexual stereotypes are raised only to be critiqued, but a comparison of the French and English versions of the passage also shows the way the translation often dodges or softens the frank discussion of racial politics. In the classroom, after being given more context about the raced words in the French, groups of students would be asked to create their own translation of the passage, obliging them to speak explicitly about the repercussions of the words we use to talk about race.