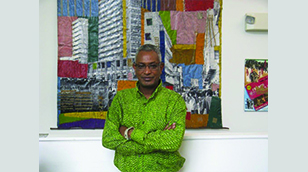 Ghirmai Negash is Professor of English and African Literature at Ohio University. His PhD research at the University of Leiden was on the Tigrinya-language literary production in Eritrea, after the advent of modernity. In Ohio University, his teaching and research focus on postcolonial African literatures, critical theory, and translation.

Professor Negash’s translation work span traditional and contemporary African poetry and fiction such as travelogues, essays, and novels. His most known translation, The Conscript (Ohio University Press, 2012), portrays the ironic role of conscripted African soldiers in the Italian colonization of Libya in the 1920s. In the NEH seminar, Negash’s research was focused on revisiting the set of decisions that have had to be made during the translation process of this novel, within frameworks of genre conventions and a range of equivalences as possibilities of retaining form and meaning.