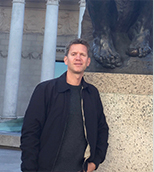 For years I worked on texts that were not highly literary and I only published translated excerpts embedded within my own essays. Recently I have found myself within a department of language and culture and have begun to devote my energies to the translation and analysis of individual works of literature, primarily poetry. When making this transition I quickly encountered a steep learning curve in literary translation. Thus when this NEH Summer Institute was first advertised I was very enthusiastic about applying and I was overjoyed to gain admission to it. Through the readings, discussions, and final project of the institute my ability to translate, in every sense of the word, foreign literature has improved tremendously. I am very grateful to Françoise and Brian for leading this wonderful institute.

A few months before attending the seminar I began a new research endeavor, the translation and interpretation of the poems of a leading figure in contemporary Tibetan poetry. The author's name is Tenzin Gyatso and he was born in 1968, during the height of the Cultural Revolution (1966-76). Modern Tibetan literature began in the 1980s and initially its chief authors and readership were laypersons; indeed modern Tibetan literature has a pronounced anti-clerical theme. Since the turn of the millennium, however, Buddhist monks have begun to respond to modern literature. Some monks have begun to compose modern-style poetry, which is characterized by free verse and typically about the hopes and struggles for a new society and culture. Indeed there are even a few monks who are notorious for writing love poetry that is the equal of that written by laymen (who presumably have more experience with courtship and dalliances). My author Tenzin Gyatso has undertaken a different modernization project. He utilizes traditional metrical forms and the classical lexicon to express contemporary sentiments and address situations and ways of life that did not exist in the past. In 2006 he published a collection of his poems entitled Fleeting Thoughts Betwixt Samsara and Nirvana and it contains many such poems. The author's mastery of the pure traditional style is also on display within these pages, it should be pointed out. I am in the process of translating and interpreting several of the poems therein.

At the seminar I chose to present on one of the most remarkable of his poems. It is entitled "A Show Seen in Thailand" and recounts a trip to a transsexual variety show in Bangkok and is based on the author's first hand experiences gained on a trip to Thailand. The poem has thirteen metered verses and its diction and imagery evince a high level of skill in traditional Tibetan poetics. However, the subject matter is entirely modern. Tenzin Gyatso writes in this poem about the humanity and struggles of the transsexual dancers in a manner that I term "Buddhist cosmopolitan." The speaker in the poem, who most Tibetan readers would take to be the author, moves through several different emotional states. Initially he is overwhelmed by the hubbub at the beginning of the show, but then moves through feelings of modesty, admiration, pity, and romantic attraction. At one point the dancer sashays up to him at his table and commands him – a lama – to be on his best behavior because he must honor his robes. Throughout, the poem plays around with the Tibetan verb meaning to transform, which is used in the word for transsexual, the word for acting out characters through dance, and even in the verb to turn (all of which appear in this poem). In the final verses of the poem the speaker is on the verge of falling in love with one of the dancers and flees the club to look for sanctuary at a Buddhist temple that is around the block. The last lines of the poem describe the appearances of the temple and the comportment of the monks in its courtyard and the reader is left with the counterintuitive insight that this lavishly decorated temple is a theater of sorts and that the monks are – in a manner of speaking – in drag. The participants of the NEH Summer Institute gave me invaluable feedback on my translation and interpretation, and suggested venues in which I can share the final version of this work.