Congratulations to SPCS majors Liz Schmidt and Amanda Schwaben, and to SPCS assistant professor Johanna Solomon and the rest of the team for their great work with the International Institute of Akron’s Listening Project in the diverse North Hill neighborhood, where over 30 different languages are spoken!

They have completed the first phase of the data gathering about residents’ experiences and perceptions living in Akron’s most diverse neighborhood and they presented their findings to a packed hall on Saturday, July 28 in Akron.

Check out this article below, which appeared in the Sunday, July 28 Akron Beacon-Journal: 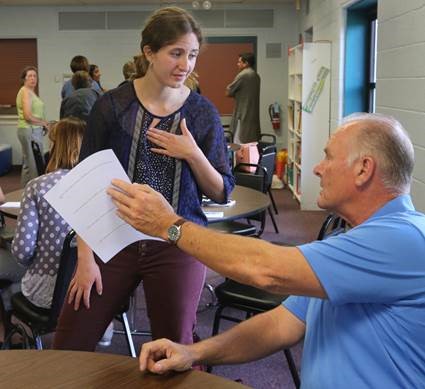 Inside, it was standing room only by 10:30 a.m. as people gathered to hear the findings of the International Institute of Akron’s first leg of a Listening Project aimed at finding out what it’s like to live in Akron’s most diverse neighborhood.

Residents over the past six months talked with researchers about what they loved: “My kids get to go to school with people that we wouldn’t have dreamed of going to school with,” one resident told researchers. “I didn’t see my first Asian person until I was an adult. I love every second of that [diversity].”

And residents also confided their worries: “Foreign people are learning how to discriminate by getting discriminated on.”

Ultimately, over the course of 48 interviews in English, Spanish, Arabic, Swahili and Nepali, researchers with the International Institute said a common theme emerged:

“More than anything, participants wanted more relationships with their neighbors of all backgrounds,” researchers concluded in a 10-page report released Saturday. “They wanted a way to start breaking down barriers … the importance of community and the vision of neighbors-helping-neighbors carried through.”

The project — called Voices of North Hill: The North Hill Listening Project — is modeled on a project aimed at addressing racial tension in the rural American South.

The International Institute, a nonprofit organization on North Hill, has brought thousands of immigrants and refugees from around the world to Akron. It hopes Voices of North Hill can stem multiethnic conflict in the neighborhood where 26 languages are spoken among people from 14 countries, including Saudi Arabia, Nepal, Egypt, Myanmar and Syria, the report said.

Whites (59.2 percent) and blacks (26.3 percent) still made up the large majority in 2015 figures cited in the report. But their numbers had declined slightly as populations of Hispanics (5 percent) and Asians (7.3 percent) rose.

Here are some findings from the report:

• Equal numbers of those interviewed either felt safe or unsafe in the neighborhood, including someone who had been shot by someone now serving 18 years for the crime. Many said they would trust their neighbors in an emergency: “Generally, if there was a zombie apocalypse, they would help fight them off.”

• All of the African-Americans interviewed had experienced hostile, racially charged behaviors directed at them or someone of their ethnicity. So had 89 percent of South Asians, 66 percent of Latinos, 50 percent of Middle Easterners and 20 percent of whites.

• About half of those interviewed mentioned language barriers causing miscommunication or shame: “We don’t feel we know anybody. We don’t really feel welcome here. Later, when we start to know the language, the culture, we feel like very welcome here by our neighbors, communities.”

The International Institute will post the full report of its finding on its website (iiakron.org) in coming days.

After the community absorbs the report, the researchers’ next step is a daylong community dialogue Oct. 13.

Johanna Solomon, a Kent State University academic and mediator, will lead conversation aimed at prioritizing North Hill needs and how to meet them.

On Saturday, after presenting highlights of the report, researchers opened the meeting to the audience.

Someone else asked if any Akron police were in the room. There weren’t.

An immigrant named David stood and said he disagreed with some ideas put forward.

“We are not learning bad habits from the Americans,” he said. “We bring racism and all kinds of ‘isms’ with us from our own countries where we do it better.”

David, who declined to provide his last name, also disagreed with a woman who said North High School teachers were learning foreign languages to communicate with students.

“Americans should not be learning foreign languages … [immigrants and refugees] should be learning English,” he said.

Every time David visits a library and sees signs in many languages, he said, it makes him feel like the community doesn’t think he’s intelligent enough to learn English.

“One last thing,” David said in perfect English, resting his hands now on the shoulders of his wife seated next to him.

“I want to thank everyone who welcomed me and my family into the community, into Akron and into this country.”