Lean and Six Sigma, the Yin and Yang of Continuous Improvement

There is a lot of discussion in the industrial arena about Lean Enterprise and Six Sigma. Many times, it appears that authors promote their focus on one of these best practice approaches, and discuss the other as if it were a competing or opposing view. If we take a deeper look, however, we should see there is great synergy and value in appropriately combining these powerful approaches.

Lean provides a “true north” view or direction. The intent is to deliver the right part (or service), in the right quantity, at the right time, with no waste, variation or over-burden, in a safe work environment. That is a tall task! It is a utopian goal. We will never fully reach it. But, this is the mantra that drives continuous improvement.

Lean focuses heavily on the elimination of waste. There are eight forms of waste, and there are various mnemonics used to help remember them, such as, TIM T. WOOD (Transportation, Inventory, Motion, Talent Under-utilized, Waiting, Overproduction, Over-processing and Defects). Overproduction is considered the worst form of waste because it causes many of the other forms. Various tools or methods are used to attack these wastes, including visual controls, 5S, set-up reduction, value stream mapping, mistake proofing, standard work, total productive maintenance and level-loading. These tools are powerful, if applied correctly, because they address common flaws that are present in processes. There is significantly less information and fewer tools, however, with respect to the reduction of variation and over-burden within Lean literature because the processes and variables involved are unique to each value stream. To explore this further, we need to look at a bit of history to understand the evolution of Lean in modern times.

Henry Ford used Lean thinking in the development of the first assembly line, but he was certainly not the first. More recently, Toyota has been so successful with Lean that people have used the Toyota Production System (TPS) as a synonymous term for Lean. Toyota’s success started largely after World War II. Japanese industry was challenged after the devastation of the war. They were desperate for change. An American electrical engineer, statistician and management consultant, W. Edwards Deming, had been promoting and extending the teachings of another famous American statistician, Walter Shewhart. Deming promoted his “System of Profound Knowledge,” which included: systems thinking, understanding variation, human psychology and the theory of knowledge. He advocated these concepts to the American industry, but was not well received. He was sent to Japan by General Douglas MacArthur to assist with the 1951 Japanese census, and taught many engineers, managers and scholars about the concepts of variation and quality control. The influence and importance of these concepts serve as the foundation to the “House of Toyota” depicted below. This is a symbolic diagram of the fundamental ideas that define Lean/TPS, and shows Stability as the base on which the integrity of the house depends. 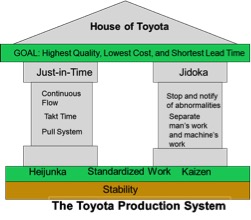 Stability is a key concept in the study of variation and statistical process control (SPC). A stable process performs consistently. It is predictable. The variation present in a stable process is always there and comes from the factors or variables that are inherent or COMMON to the process. Instability and unpredictability come from factors that are NOT inherent to the process. These external or SPECIAL cause factors can come from operator error, inconsistent process steps, machine failures and a multitude of other variables that are unexpected and cannot be predicted. Lean uses tools such as Standardized Work, Mistake Proofing and 5S to eliminate or avoid such external or special cause influences. Lean does not, however, provide techniques to analyze, identify and modify COMMON and SPECIAL cause variables.

The origins of Six Sigma are commonly credited to Bill Smith who worked for Motorola. He noted that Motorola was incurring very high business costs from customer claims, warranty issues, and internal scrap and rework costs. These types of costs are commonly identified as the “Cost of Poor Quality” (COPQ). He developed an improvement method that expanded upon the previous Plan-Do-Study-Act initiated by Shewhart and Deming. This method contained the steps: Define, Measure, Analyze, Improve and Control (DMAIC), and included tools and techniques to effectively perform each step. Where PDSA left much of the process undefined and dependent on the practitioner, DMAIC came with a checklist and a toolkit. It could be taught and leveraged by people within an organization.

The primary goal of DMAIC was to reduce the variation. The term Six Sigma originated from this idea. Sigma is a Greek letter used in statistics to represent the standard deviation of a process. This statistic quantifies the variability of a process. Bill Smith proposed that if a process could be improved such that plus or minus (+/-) six standard deviations would fit between the upper and lower specification limits, there would be virtually NO defects. Meeting these requirements in this way would also ensure customer claims and warranty issues would be reduced.

The DMAIC method has proven very effective. It focuses on the PROCESS inputs and outputs using analytical and statistical tools. It seeks to describe the mathematical relationship between the inputs (independent factors) and the outputs or results (dependent upon the inputs). In simple terms, it seeks to define an equation such as Y=f(x). In layman terms, the OUTPUT (Y) is a function of all the independent INPUTS.

Jack Welch leveraged and popularized the DMAIC Six Sigma method while CEO of General Electric with great success. He extended its application beyond the COPQ to address all business metrics. We can generally group such metrics into four categories: Cost, Cash, Customer Service and Earnings/Sales. In Six Sigma terminology, we can call these the BIG Y’s. In other words, these four categories are the high-level OUTPUTS or results of a business.

It is here that we reach a nexus with Lean. The Lean goals of right product (or service), right quantity and right time with no waste, variation or over-burden in a safe work environment, can be measured as the Six Sigma Big Y’s. Lean brings a standard set of techniques to reduce wastes. Six Sigma brings an analytical and statistical approach and tools to reduce variation via fundamental understanding of process inputs and outputs and establish stability; the foundation of Lean and the House of Toyota. So far, however, we haven’t addressed the concept of over-burden. What is it and why should we care?

Over-burden is the undue strain or stress on an organization. It can be subtle and damaging. Psychological stress on employees can lead to health issues that increase healthcare costs and absenteeism. Money tied up in unsold inventory consumes cash, which isn’t available for needed capital projects. Machines or equipment purchased with capital become assets, which are depreciated or expensed against profits. All of these create strain on an organization, and we should strive to reduce or eliminate these burdens. How can we reduce over-burden? How can we eliminate inventory? Where must we establish inventory and how much? How should we design our value streams to eliminate or avoid wastes? Which machine should we buy that best fits our needs? These questions are certainly not trivial, and while Lean strives to reduce over-burden, there is not much “standardized work” or methods to help answer such questions.

Six Sigma has further evolved to provide a method and tools to design or redesign processes and products. These developments are more recent than the original DMAIC focus, and are generally referred to as Design for Six Sigma (DfSS) techniques. Another term associated with this approach is known as Quality Function Deployment (QFD), and is credited to Yoji Akao, who originally developed it in Japan in 1966, to translate the Voice of Customer (qualitative needs) to end products and processes. The Six Sigma DMADV method (Define, Measure, Analyze, Design and Validate) incorporates DfSS and QFD concepts and provides tools to help focus the creative design/redesign process, and can be effectively used to design any product, service, process or value stream. This thinking can be very useful in the specification and selection of capital equipment, the redesign of equipment layout or the redesign of standardized work for a given process step.

Hopefully, this discussion reinforces how Lean and Six Sigma can, and should, co-exist to drive continuous improvement. Lean/TPS and Six Sigma have both been very successfully deployed separately, so YES you could choose between them. Each approach has its strengths and weaknesses because they are essentially complementary. They are the Yin and Yang of continuous improvement. One without the other is not fully complete. Take the best of both!

"Thomas, this is a great"

Submitted by Kyle (not verified) on Fri, 04/07/2017 - 2:50pm
Thomas, this is a great overview of Lean and Six Sigma! I think you did a great job explaining the differences between the two and also outlining how they can be used together to create one continuous improvement program. I have not been around long enough to see first hand how they were opposing forces at one time but to look at the history and timeline of how they were developed into what they are now (both separately and collectively) is pretty cool! Thanks for writing this! And I look forward to taking your course this month!

Submitted by Tom Putnam (not verified) on Mon, 04/10/2017 - 9:32am
Kyle, Thanks for the feedback! I'm sure there are organizations that have embraced both approaches from the start, but that hasn't been my experience. I'm excited about the upcoming Lean Practitioner Certificate class, and I look forward to working and learning with you. Regards, Tom 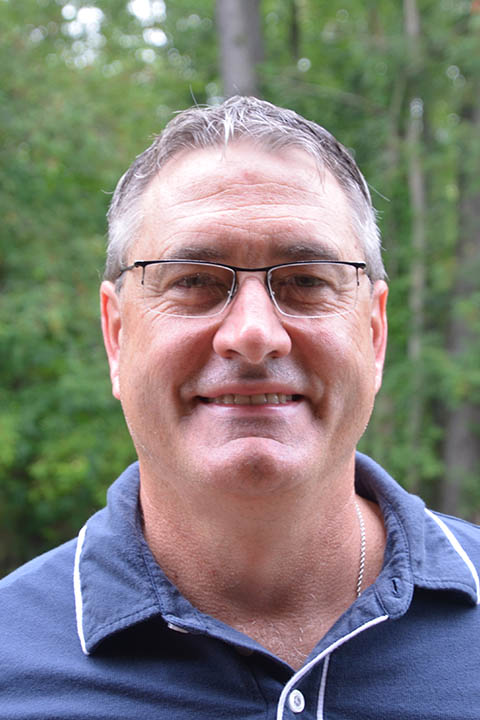 The Center for Corporate and Professional Development
University Relations