Live Chat
Oleg Lavrentovich, Ph.D. (second from left), works in a microscopy lab with a colleague and Kent State students.

Some researchers almost make the funding process look easy, and one of Kent State University’s most prolific and consistently funded scientists is at it again. 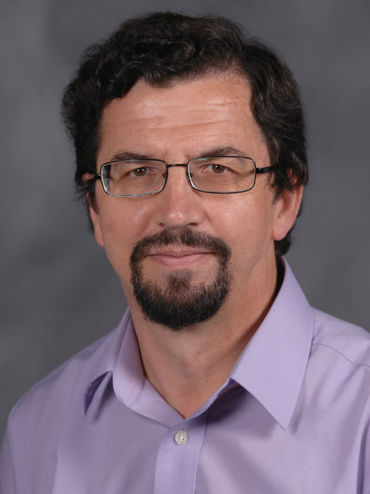 “While it is uncommon to see researchers receive such sizable grants in such quick succession, it certainly is not surprising with a researcher of Oleg’s caliber,” said Paul E. DiCorleto, Ph.D., Kent State's vice president for research and sponsored programs. “Researchers like him give us great confidence that the AMLCI will continue to bring prestige and recognition to Kent State.”

The larger of the two awards is a three-year, $540,000 grant for “Active colloids with tunable interactions in liquid crystals.” The study follows a 2016 project in which Lavrentovich showed how bacteria placed into a structured liquid crystal environment can be made to move in a fixed pattern and even move other microscopic materials.

“Now we are looking at higher concentrations of the particles when they start to interact with each other, and how this interaction modifies their collective dynamics in a liquid crystal environment,” he said.

Like many living organisms in nature, a single microscopic particle will often behave differently by itself than in a group. Lavrentovich’s models show how a structured environment causes the particles to not only move in a given direction, but also maybe join together and form patterns ranging from simple chains to sophisticated vortices. In other cases, some particles can be directed by the liquid crystal to go in one direction while others go in the opposite direction.

Lavrentovich sees potential implications for microchemical analysis and biomedical diagnostics, especially where it is necessary to separate particles.

“These particles can be functionalized with molecules that experience antibody-antigen interactions, and these interactions are very specific, so they can tell you whether there are some pathogenic agents in the environment or in the body, and you can extract these agents and analyze them,” he said.

He hopes the research will lead to new microscale technologies, like using small particles as building units of soft microrobots.

The other grant is a three-year, $450,000 award from the NSF for “Electrically tunable cholesteric optical filters.”

Modern optical technology only allows for the changing of color through permanent filters, but Lavrentovich has been able to show that an electrical charge administered to a liquid crystal film between two glass plates will cause a dynamic color change. In fact, the voltage directly determines the color, allowing him to change film’s color at will.

“We discovered this unusual structure within liquid crystals where in the ground state you have molecules which twist and bend in space, and because of the twisting and bending, the structure has a periodicity,” he said. “This periodicity is in the range of visible light, and this is why when you shine light on such a structure, the reflected light is of a wavelength that is defined by the period of this liquid crystal structure. And when you apply electricity, you change the period, and thus you change the wavelengths that are reflected. Amazingly, a single liquid crystal layer can tune the wavelength in a very broad range, from ultraviolet to infrared, including the entire visible spectrum.”

Lavrentovich said the technology could be valuable in smart windows and in biomedical imaging.

He said it also could be used to create better television sets that would produce color through electrically charged pixels without the need of currently used permanent color filters.

“Of course, we are far away from that because the switching speed is not very high,” he said. “You need 24 frames-per-second switching speed or better to satisfy the needs of TV screens.”