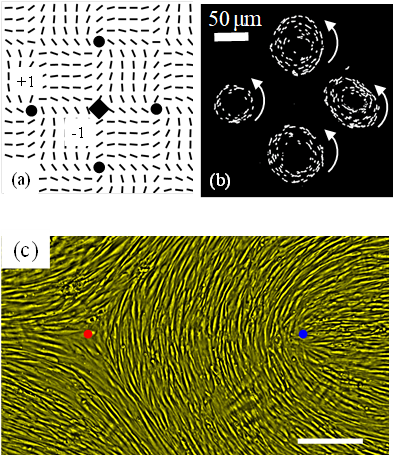 Figure 1. (a) Director lattice with +1 and -1 defects commands (b) bacteria to swim counterclockwise around +1 defects and avoid cores of -1 defects.

Motility of microorganisms such as bacteria and spermatozoa is a hallmark of life and a triumph of evolution. Their locomotion relies on peculiar principles to overcome viscous drag, enables collective effects such as quorum sensing, and inspires development of micro-robots. Prior research focused on isotropic environments, such as water and water-based solutions. Our research team explores motile microorganisms in an anisotropic environment of liquid crystals (LCs) [1]. Anisotropy, i.e., dependence of properties on spatial directions, is common for crowded media in which most microorganisms live. The goal is to explore how the environmental anisotropy shapes the individual and collective behavior of microorganisms, including dynamics and quorum sensing. The study focuses on swimming bacteria and spermatozoa in water-based nontoxic LCs. Orientation of LCs is patterned in space by plasmonic photoalignment. Patterned LCs allow one to command trajectories and spatial distribution of microorganisms, concentrate them in preselected locations, as shown in Figure 1. The REU students will test how different patterns of LC environment affect the individual and collective behavior of swimming nonvirulent bacteria such as Bacillus subtilis and spermatozoa. Significance of the proposed research will be in the development of concepts to command the behavior of microorganisms, direct them towards targeted locations, manipulate their distribution and concentration in space and time, thus triggering biochemical effects such as quorum sensing and fertilization. This knowledge will advance the science of active matter and microbiology, it could inspire new approaches to technologies of microscale robotics, fabrication, transport, sensing, delivery, alternative treatments of infectious diseases.