The mace carried by the mace bearer in the academic processional symbolizes academic authority. The Kent State University mace was created and crafted by alumnus Michael V. Jaszczak. Mr. Jaszczak undertook the arduous task of creating the mace from the input of a committee charged with the task of bringing forth a new design utilizing the resources and wealth of talent available in our School of Art.

The central motif of the university seal retains the sun of the State seal, signifying state ownership and is symbolic of the light of knowledge and wisdom. The shield suggests the geographic shape of Ohio. The bird, which symbolizes leadership, is the chimney swift, a species which colonizes on campus and seems to be in constant flight. The university colors of blue and gold are incorporated in the enameled piece, which is set on top of a walnut pole, Encircling the pole are eight silver spears, representing the eight campuses of Kent State. The mace rests in a walnut stand crafted by Dr. David Dalton of the College of Education, Health and Human Services.

An expert craftsman in enameling, Mr. Jaszczak received his B.S. in art education from Case Western Reserve University and the Cleveland Institute of Art in 1984. He earned his M.A. in enameling from Kent State in 1994 and an M.F.A. in 1998. An art teacher in the Parma City Schools, Mr. Jaszczak resides in Parma with his wife, Elizabeth, and their two children. 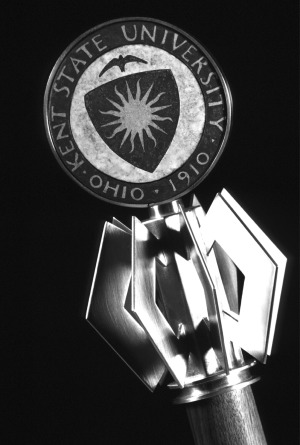