Officers from Kent State University Police Services looked a little scruffy in November as they participated in No-Shave November to raise awareness for cancer.

No-Shave November is a nonprofit organization dedicated to raising awareness and funds for cancer prevention, research and education. Its goal is to get hairy for those cancer patients, survivors and victims who cannot. Also known as “Movember” for growing out moustaches, the monthlong event also raises awareness for men’s health issues, including early cancer detection, diagnosis and effective treatments. Participants, who are mostly men, put their razors aside for the month and donate the hair to cancer patients. 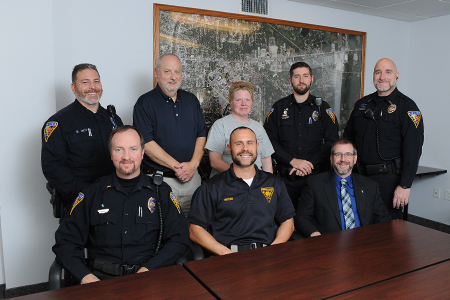 Officer Vance Voyles says a dispatcher in the department was going to participate in raising awareness to family and friends, and Voyles thought that the whole department could get involved. After receiving overwhelming support from other officers, they decided to start growing out their beards.

“I thought, as someone who is in direct ‘visual’ contact with the public at large, a police officer could just as easily spread the word and raise awareness, too,” Voyles says.

Voyles lost his father to cancer when he was 24 years old, and his father-in-law is currently battling cancer for the fourth time.

“Many of us have been touched by cancer in one form or another in our lives,” Voyles says. “Any help our donation affords is a step in the right direction toward ending cancer for good.”

For Officer Brittnee Wolf, participating in No-Shave November holds a deeper meaning. Wolf has lost multiple family members to cancer including her mother, father and grandparents.

“Cancer has played an extreme role in my life,” Wolf says. “Its effects don't last a temporary time; they truly last a lifetime.”

Since Wolf and other women at Kent State Police Services cannot grow beards, they spread awareness by putting a streak of blue in their hair. Every officer who participated also wore a blue prostate cancer awareness pin on their uniforms.

For Wolf, actively raising awareness for cancer is rewarding and healing, and she is always looking for ways to get involved. She wants Kent State students to understand that cancer can affect anybody at any time in their lives.

“I'm very glad to be able to spread awareness because far too many young folks think their bodies are invincible and that it would never happen to them,” Wolf says. “Our goal is simply to open their eyes and help them be proactive.”

Kent State Police Services is extending its No-Shave November cause, allowing its members who donate $25 to continue to grow facial hair (or wear a blue streak in their hair for female officers). The funds raised will be used to host a pancake breakfast event with Santa for 22 kids of single parents who are in the Literacy and Independence for Family Education (Life) Program in Kent State’s Center for Adult and Veteran Services. The event will be held at Kent State’s Women’s Center on Dec. 10.