An internationally recognized social geographer, a metadata expert and a leading researcher in the science of liquid crystals and nanomaterials received Kent State University’s 2014 Outstanding Research and Scholarship Awards at a ceremony and reception yesterday on the Kent Campus. 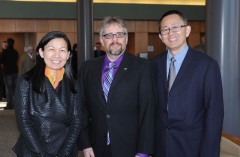 “The awardees reflect the breadth of research at Kent State and the impact it has on our lives,” said Grant McGimpsey, Ph.D., vice president for research at Kent State. “These scholars have made major contributions to their fields, from population geography to organizing big data and broadening our understanding of the structure and function of nanomaterials. Their work has been recognized by their peers around the world, and we are honored to celebrate their accomplishments.”

Tyner, an internationally recognized political, population and social geographer, was cited for bringing “geographical theory and a geographical perspective into the national and international discussions of war, violence and genocide,” by Thomas Schmidlin, Ph.D., professor of geography at Kent State.

“He transforms how geographers and those outside of geography view these critical issues,” Schmidlin said.

Tyner is a prolific scholar whose book “War, Violence and Population: Making the Body Count” won the 2009 AAG Meridian Book Award. His most recent book is “Genocide and the Geographical Imagination: Life and Death in Germany, China, Cambodia” (2012). He has published 12 single-author scholarly books and 75 refereed journal articles, book chapters and encyclopedia entries. His current research is funded by the National Science Foundation.

Tyner joined Kent State in 1997 as an assistant professor of geography after earning his Ph.D. in geography from the University of Southern California.

Zeng is internationally recognized for her research on metadata and knowledge organization, and she is an expert on digital libraries. She has written five books, including an influential book on metadata that she co-authored, and more than 80 articles on information management. Her research has been supported by the National Science Foundation, the Institute of Museum and Library Services, and others.

Zeng collaborates with researchers internationally, including the United Nations’ Food and Agriculture Organization, the World Wide Web Consortium, and the Getty Research Institute, and she has represented the United States in international standardization efforts.  She helped secure funding to rebuild the Beichuan Library and Archive after the deadly earthquake in China in 2008.

“She seems to have endless energy and tireless patience in giving help to anyone who needs her attention,” wrote a colleague in support of her nomination.

Zeng came to Kent State in 1992 as an assistant professor after earning a master’s degree from Wuhan University and a Ph.D. from the University of Pittsburgh.

Li is a leading researcher in the fields of molecular design, functional nanomaterials and self-assembly. He is currently working on light-harvesting liquid crystals for self-organizing photovoltaics, “smart” energy-saving devices and more. Li has edited four books in the past four years and has written more than 20 book chapters and encyclopedia entries, along with many journal publications and patents.

Over the past several years, Li has been a principal investigator in federal projects totaling $15 million, supported by federal agencies that include the Department of Defense, the Department of Energy, NASA and the National Science Foundation. He also has received funding from the Ohio Third Frontier program. Li has sponsored and advised 17 postdoctoral associates and several Ph.D. students.

Li was cited by a colleague for interests that are “at the forefront of societal needs with strong research programs centered on energy and photonic materials’ needs.”

He earned his Ph.D. in organic chemistry in 1995 from the Chinese Academy of Sciences (CAS), Shanghai. In 1998, he became the youngest full professor there in organic and medicinal chemistry, and in the following year, he received CAS’s One Hundred Talents award. He held visiting professorships and visiting scientist positions in France, Germany and at the University of Oregon and was an Alexander von Humboldt fellow in Germany. Since 2004, he has been a senior research fellow in the Liquid Crystal Institute and an adjunct professor in chemical physics at Kent State.