LOCATION: The ballroom of the Kent State University Hotel and Conference Center.

FREE & OPEN TO THE PUBLIC

How can it happen that children and teens sometimes find themselves looking up the barrels of their own governments’ guns? The May 4 shootings shocked the United States but were hardly unique. We will use a fishbowl discussion format to consider the causes and consequences of this surprisingly common form of state violence, and ways to reduce it. In a Fishbowl discussion, participants seated inside the inner circle, or ‘fishbowl,’ actively contribute to the discussion; they ask questions, share thoughts and opinions. Those on the outside circle or circles listen carefully to the ideas presented and may decide to rotate into the inner circle discussion or to ask question of the group in the center. 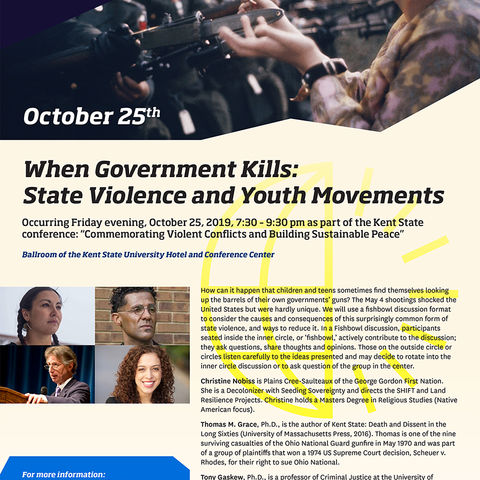