Front Row Seat to History: What Freshmen Take Away From May 4 Visitor Center Tours

Kent State University sophomore Phil Morgan said he learned about the May 4, 1970, shootings during a history lesson in middle school that included few details, except the fact that the Ohio National Guard’s presence at a student protest ended in the deaths of four students.

Mr. Morgan got a better understanding of this tragic event during his freshman year when he visited Kent State’s May 4 Visitors Center as part of the university’s First Year Experience course. It was then that Mr. Morgan learned details enabling him to add context to his sparse knowledge of the tragedy.

“I learned that many days and multiple events led up to the catastrophe,” Mr. Morgan said. “I liked how the exhibits showed us exactly what was going on and how they were interactive. It’s definitely something of great importance for people who are attending Kent State to know the university’s history.”

Mr. Morgan’s experience is similar to that of many students who visit the May 4 Visitors Center during their freshman year at Kent State. They arrive knowing very little about May 4, 1970, when the Ohio National Guard fired on a crowd during a demonstration killing four students  – Allison Krause, Jeffrey Miller, Sandra Lee Scheuer, and William Schroeder -- while wounding nine other students. 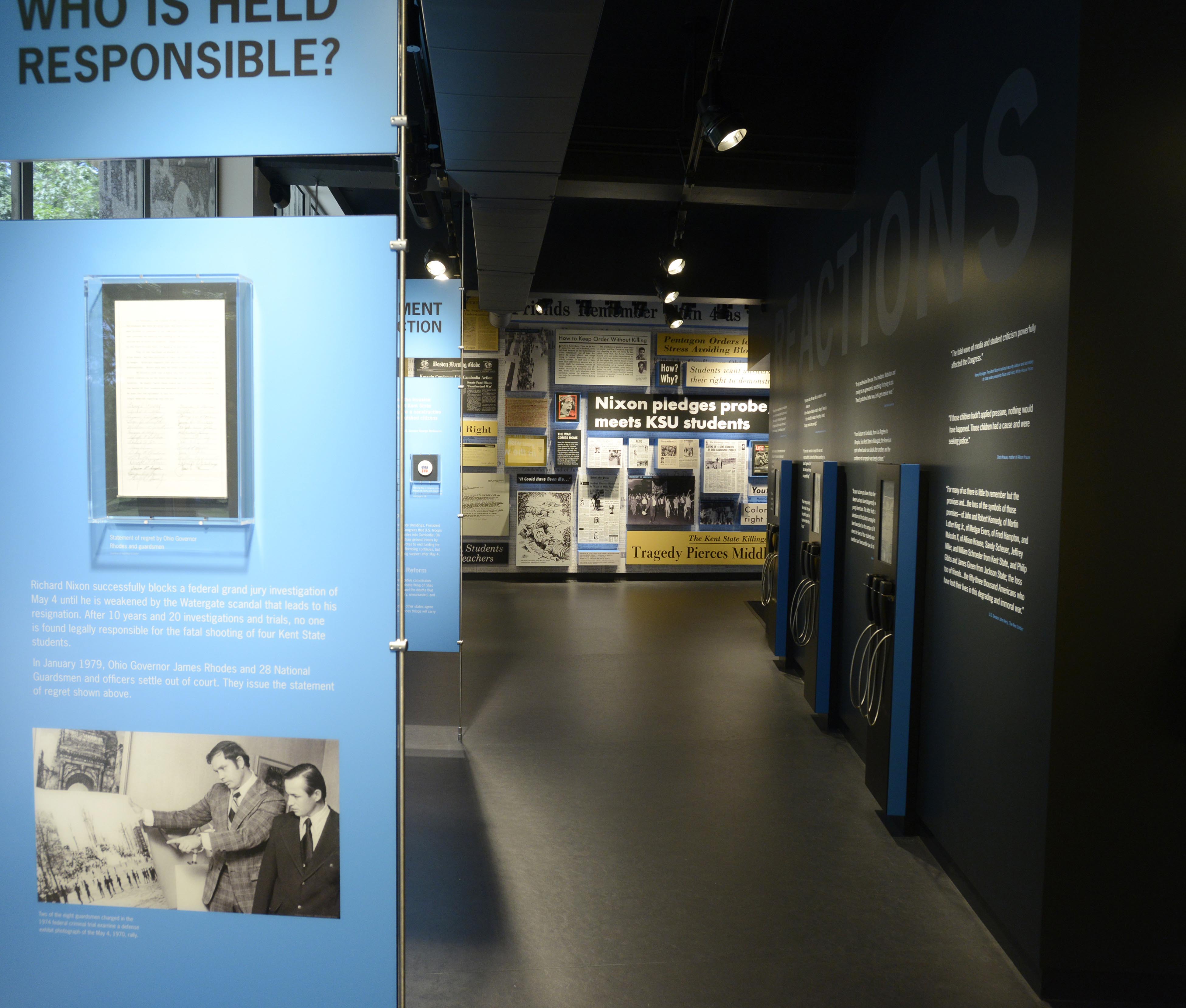 The May 4 Visitors Center, which opened in 2012, offers an immersive experience that gives students a front row seat to history. The center is located inside Taylor Hall, adjacent to the parking lot where the shootings took place.

“We are really happy to have so many freshmen come through the First Year Experience course and see the visitors center because we tell students that this is their history,” said Dr. Mindy Farmer, director of the May 4 Visitors Center and an assistant professor of history at Kent State University. “May 4 isn’t some abstract event that happened somewhere else. It is an event that happened in the same hallways they walk through and on the same sidewalks. It’s their chance to put themselves in the shoes of people who came before them and to think about where they would have stood.”

In a typical semester, 150-200 classes of 20 to 25 Kent State freshman visit the center. In addition to serving Kent State students, the center is open to schools and senior centers.

“A lot of high schools visit,” Dr. Farmer said. “I enjoy when they stop by because they are potential Kent State students.”

Last academic year the center focused on the First Amendment and this year its focus is the 26th Amendment of the Constitution, which lowered the voting age from 21 to 18 years of age in 1971.

Recently when a class of 18 students visited the May 4 Visitors Center,  assistant director Lori Boes set the scene with an explanation as to what led young adults to protest the Vietnam War.

“On April 30, 1970, Richard Nixon announced the invasion of Cambodia,” Ms. Boes told the students. “Why do you think the students were upset? Because they may have been drafted. If you are 18, 19 or 20 and you can’t vote people out of office, what tool can you use? Protest. They went to the streets and vocalized their unhappiness.”

From that moment the May 4 Visitors Center immersed the students in the social and political climate and pop culture of the day. They learned about social justice, collective activism and the deep generational gap that divided the views of parents and young people on economic, political and cultural topics.

They had the opportunity to see where they would have fallen in the Selective Service draft by locating the month and day of their birthdays on a chart of those drafted for the Vietnam War.

As the group of students put their coats on to leave, junior Kyra Horton, a marketing/public relations major, reflected on the breadth of knowledge that she and her peers acquired during their tour. Ms. Morton, a Student Success Leader who mentors FYE students, has had the opportunity to visit the center four times.

“I knew nothing about May 4,” Ms. Horton said. “The video (retelling of the shootings) was very beneficial. Every time I see it I learn things that I didn’t know.”

During an interview, Dr. Farmer said that the visits are also a time to dispel historical myths, including the belief that the National Guard fired only at protesters.

“The Guard fired on a crowd that included all manner of people who were there for all manner of reasons,” Dr. Farmer says. Sandy (Scheuer) was walking to class. Allison (Krause) was protesting, Jeff (Miller) was protesting and Bill (Schroeder) was an onlooker. This was also true of the students who were injured.”

After visiting the May 4 Visitors Center, Kent State students often walk away with the awareness that they are heirs to a rich legacy that began many years before the Kent State shootings.

“Our students are inheriting a history of activism,’’ Dr. Farmer said. “Kent State was built on years of protest. That is a very important part of what it means to be a Kent State graduate.”

Kent State is already making plans for the 50th Commemoration of the May 4 shootings. To learn more, visit https://www.kent.edu/president/may4