Live Chat
Artist Don Drumm poses with a photo of his sculpture that was shot on May 4, 1970, at Kent State University.

Artist Don Drumm reflects on his sculpture’s role in May 4, lifelong impact as 50th Commemoration appears on horizon

Three days after May 4, 1970, Akron artist Don Drumm went to the campus of Kent State University with a team of journalists from the Akron Beacon Journal. They wanted his perspective on one thing: a bullet hole in the 15-foot sculpture outside of Taylor Hall.

The abstract sculpture, which Mr. Drumm created for the university three years earlier, had been an inanimate witness to tragedy. The bullet hole in one of its steel panels offered a silent but articulate account of what really happened during the explosion of Ohio Army National Guard gunfire that left four students dead during a protest of the United States invasion of Cambodia.

The emotion Mr. Drumm felt when he arrived at Taylor Hall that day still sits in the pit of his stomach nearly 50 years later. 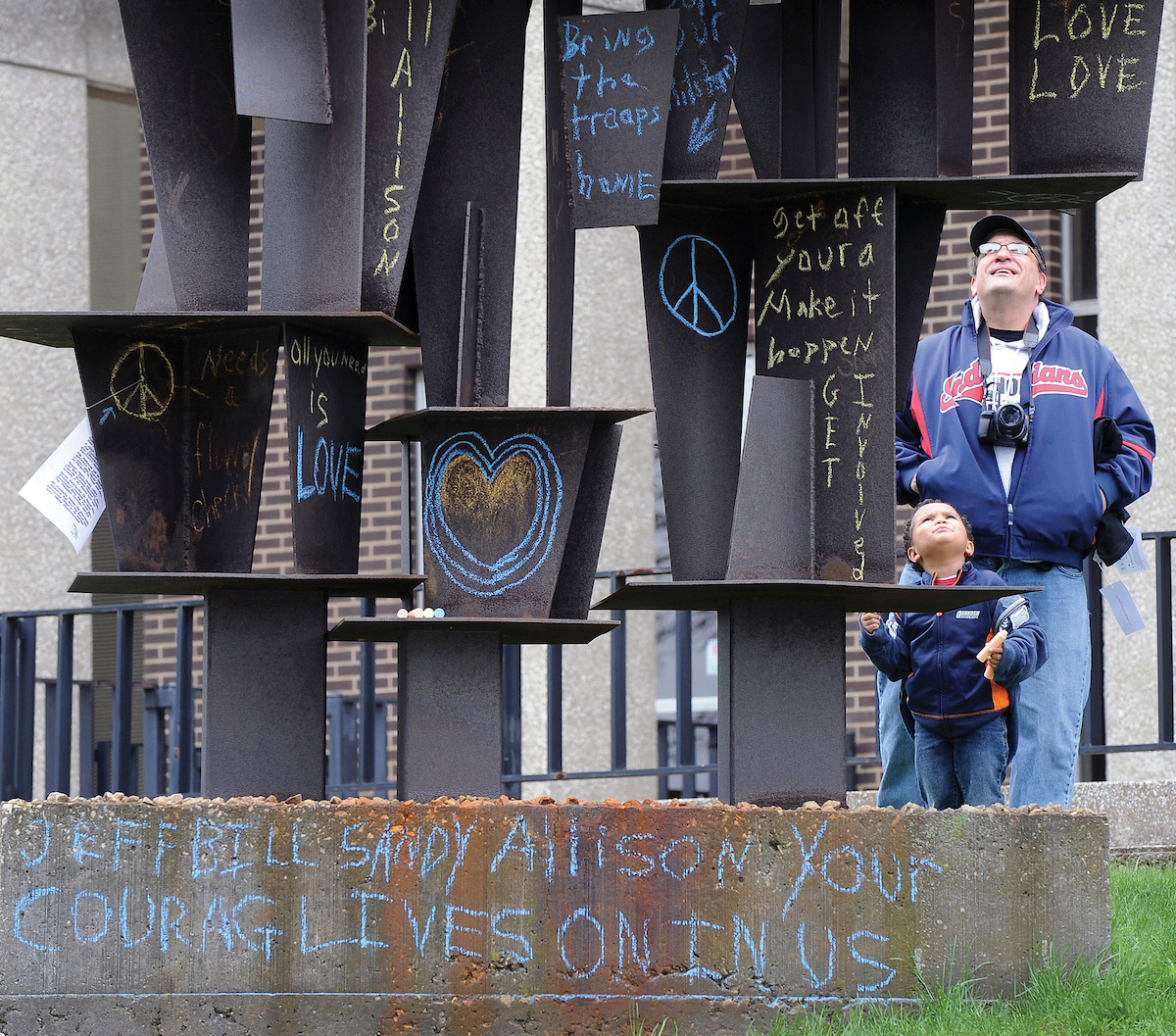 “When we arrived, it was a beautiful, sunny day. We walked up, and there was a blood stain near the sculpture,” he said recently, rubbing his forehead with the palm of his hand as he recollected the scene. “It made me cry. It was all I could do; I was so choked up.”

The purpose of the trip to campus was to answer the question, was the hole in the sculpture proof that a sniper had fired on the national guardsmen? Were the shootings a defensive response?

That was the theory that emerged when observers noted that the metal around the rim of the bullet hole splayed outward in the direction from which the national guardsmen had fired, suggesting to the laymen’s eye that that the bullet had been fired at the guardsmen.

These were the days before a quick Google search would have produced expert descriptions of the ballistics effects on steel of any composition and dimension. Men in black suits were still swarming campus, investigating and analyzing. Findings wouldn’t be released for months.

So the journalists conducted their own test. They invited Mr. Drumm to a farm in Suffield Township and asked him to bring along a piece of steel that was the same thickness of the material he used in the sculpture. The same type of firearm and ammunition used by the national guard soldiers was fired into the steel plate. When the test was complete, the resulting hole looked the same as the one in Mr. Drumm’s sculpture, with the metal rim bending out in the direction from which the bullet was fired.

The Beacon Journal story made clear that the test put to rest only the rumor that the bullet hole in the Drumm sculpture proved students fired on the guardsmen first. But it did not fully explain the details known today – that the students had no weapons beyond the stones lobbed at the military at one point during the demonstration. 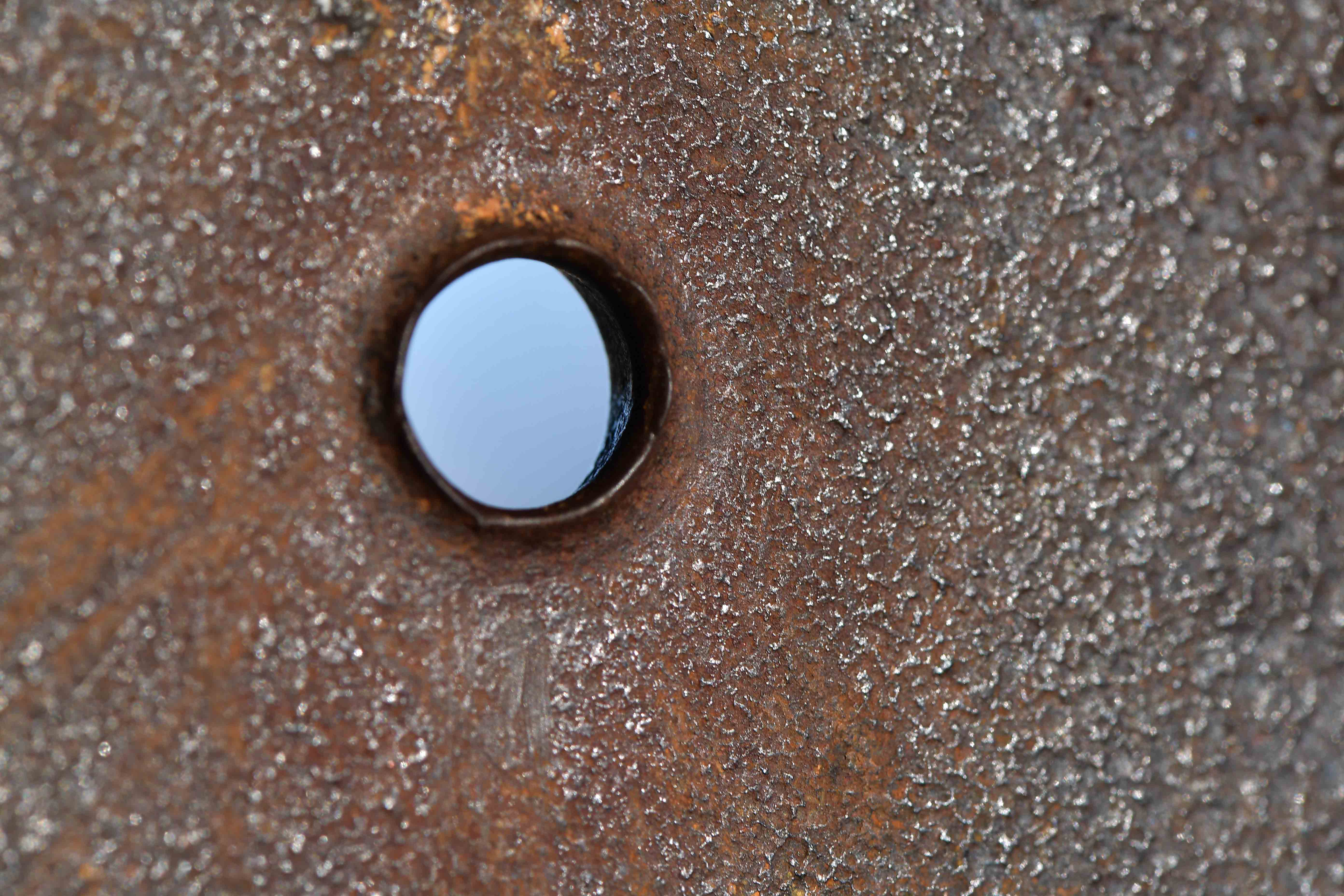 of the Beacon Journal’s submission for the Pulitzer Prize, which the newspaper won for general local reporting in 1971. In a photo that ran with the story, Mr. Drumm is pictured holding a magnifying glass up to the bullet hole, his signature chinstrap beard in place, only darker.

When the Kent State shootings happened, Mr. Drumm was preparing to move into his first public studio space on Crouse Street in Akron.

That studio is now an eight-building complex of gallery and studio space. During a recent interview there, he reflected on the last five decades and marveled at the passage of time.

Mr. Drumm, now 83, earned his Bachelor of Fine Art degree from Kent State in 1956 and returned to complete his Master of Art degree. He explained that the university asked him to create the sculpture in 1967, as part of a project funded through a grant from the National Defense Education Act.

He paused mid-sentence and raised an eyebrow to emphasize the irony of that detail.

The abstract sculpture was meant to bring an added note of creativity and distinction to the grounds of the newly built journalism and architecture building. It was the first piece of art Mr. Drumm made using CorTen, a steel alloy that weathers in a way that it never needs to be painted, but instead retains an intentional, rusted appearance without corrosion.

When he designed the piece, known as Solar Totem #1, his plan was for the artwork to change with the movement of the sun, the 100 or so steel plates perpetually throwing shadows this way and that.

As it turned out, Solar Totem #1 is an ever-changing piece of art, but not in the way Mr. Drumm intended. Every spring, the sculpture is adorned with daffodils from Blanket Hill. Occasionally, the piece is embellished with candle wax from prayer vigils, and often, it gets marked with notes in chalk demanding remembrance and peace.

Mr. Drumm heartily approves of these contributions to his artwork. But there is one thing he insists never be changed.

“I have let it be known to different people that I do not want that hole ever welded closed,” Mr. Drumm said. “And nobody has ever asked me to.”

Long before the 2012 opening of the May 4 Visitors Center and the declaration of the 17-acre site as National Historic Landmark in 2016, there were other efforts to memorialize the four students killed – Jeffrey Miller, Allison Krause, William Schroeder and Sandra Scheuer – and the nine who were injured.

In 1990, the university dedicated the May 4 Memorial, a carnelian granite installation that features four freestanding pylons along the edge of Blanket Hill. Each spring, daffodils representing the Americans killed in Vietnam bloom around it. At least four other permanent structures on the Kent Campus are dedicated to the four lives lost and those that were changed forever on May 4, 1970. All have profound meaning and purpose, but none seem to have the enduring, emotional impact of the scarred Drumm sculpture.

“Solar Totem #1 is a tangible, visceral memorial to the shootings,” said Mindy Farmer, Ph.D., director of the May 4 Visitors Center and assistant professor of history at Kent State. “It is witness to the brutality and power of the 67 shots fired by the National Guard and a reminder that the university, like the sculpture, will forever bear the wounds of May 4, 1970.

The day after his visit to campus to examine Solar Totem #1 nearly 50 years ago, Mr. Drumm went to Bowling Green State University, where he was artist-in-residence at the time. He had been scheduled to deliver a talk, and he was determined to keep his commitment. After his presentation, a student approached him and asked if he’d be willing to create a memorial sculpture to the Kent State four that would live at the Bowling Green campus.

After some discussion with Bowling Green’s then-President William Jerome, Mr. Drumm was commissioned to create a new sculpture. A few months later, the installation, Bridge Over Troubled Waters, constructed of the same CorTen steel used in his Kent State sculpture, was dedicated to the memory of the four Kent State students killed on May 4, 1970, as well as to two students who were shot and killed by police on the campus of Jackson State College in Mississippi 11 days later.

This is not the Drumm sculpture most people associate with the Kent State shootings. But for the artist himself, this is the May 4 memorial. Into it he poured his own sorrow and confusion over a tragedy he still cannot comprehend.

Over the last 50 years or so, Mr. Drumm has lived life with his wife, Lisa, surrounded by art. Now, multiple generations of Drumms work in the arts, including both of Mr. Drumm’s daughters. His Akron-based studio and gallery is a thriving business, providing gallery facilities for more than 500 artists and studio space for three resident artists.

Throughout his career, he has pioneered the use of metal in the creation of major works of art. His sculptures serve as landmarks throughout the city of Akron, and his installations can be found throughout the world.

To learn more about Kent State's plan for the 50th Commemoration of May 4, visit www.kent.edu/president/may4.