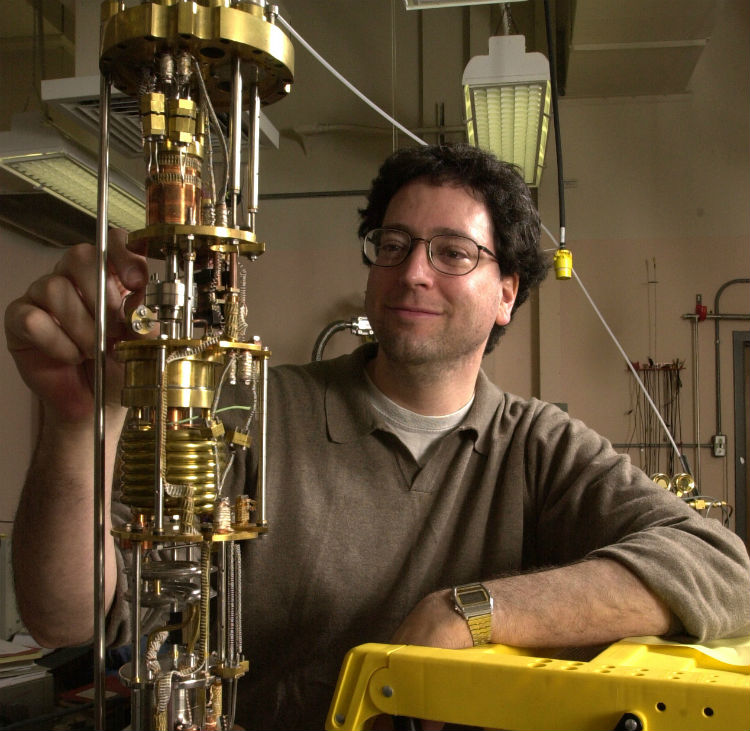 Heat is a nuisance. At least, that is the point of view taken by low temperature physicists, insofar as thermal energy disturbs the very delicate, subtle, quantum mechanical phenomena they study. Indeed, the label "ultra-low energy physics" describes much of the work of Prof. Ellman, and reflects his interest in materials like exotic superconductors, unusual magnets, and positively strange insulators. As an example, Prof. Ellman has a long-standing interest in so-called "heavy-fermion" compounds, which are metallic materials whose electrons behave as if they weigh hundreds or thousands of times as much as they do in most metals. Good examples of the bizarre behavior exhibited by such systems may be found in the material UPt3 (Uranium Platinum-3), whose unique multiple, anisotropic, superconducting phases (or "gap structures", the first of which starts only 0.5 degrees above absolute zero) remain a major puzzle for theorists to explain and a major challenge for experimentalists who wish to design incisive, definitive experiments. Prof. Ellman has extensive experience in studying these complex quantum states using a variety of techniques, including thermal conduction and ultrasonic attenuation. His lab is presently probing the momentum-space geometry of the gap structures of heavy fermion and high-Tc superconductors using ultrasound, high-energy phonon spectroscopy, and other directional probes of quasiparticle density.

A similar set of techniques will be used to study the excitation spectrum of exotic magnets such as Li Ho YxF1-x, a dipolar-coupled Ising system that becomes magnetic 1.5 degrees above absolute zero. Phonons (sound waves) also play an important role in so-called "correlated insulators", insulating materials whose charge carriers strongly interact at low temperatures, and a variety of related techniques (including tunnel junction phonon generators) will be applied to these systems as well.

All this is not to say that life only begins near absolute zero. Prof. Ellman has wide ranging interests in physics, has worked in particle astrophysics and scanning probe microscopy, and work in his lab continues to apply ideas and techniques from a variety of fields. As an example, precision magnetometers constructed from piezoresistive cantilevers (developed for atomic force microscopes) are being pursued for several applied and fundamental experimental programs. Students in the group are exposed to many techniques and a broad range of physics concepts and methods. The lab itself is equipped with a varied array of electronic, cryogenic, materials preparation and computer equipment, reflecting the general philosophy of the group: maintain a research focus but remain flexible to new ideas and directions.