Cities Step Up to the Challenges of Climate Change; WKSU; December 17, 2018

Our climate is rapidly changing. Recent studies show earth could be entering a period of warming not seen since the end of the age of dinosaurs. That is, if current trends continue. In this week’s Exploradio, we look at local climate research and local plans to help prevent the effects of a warming planet.

Local climate research and Cleveland's plan to mitigate climate change Beth Herndon teaches geology at Kent State University.  She’s rummaging through a large freezer in her office filled with bags of soil from the Arctic. 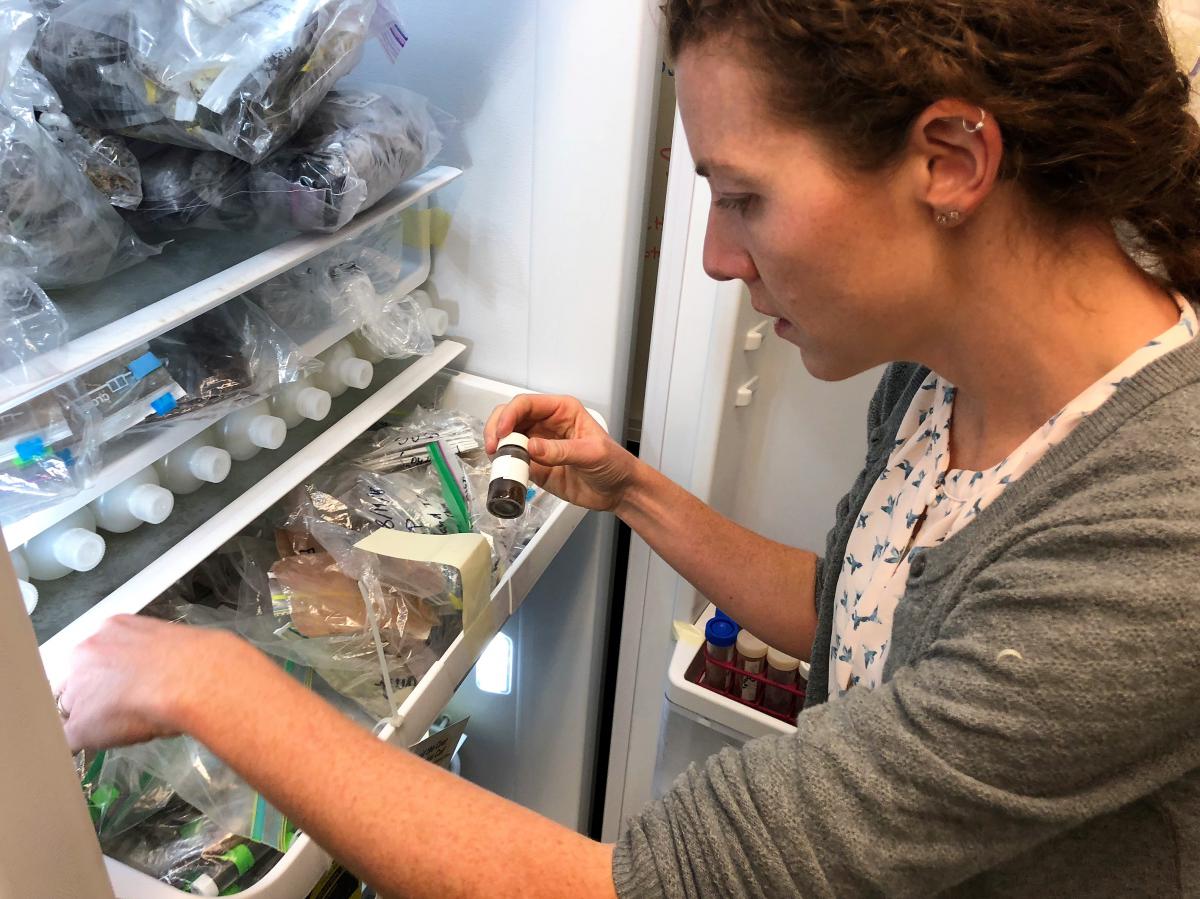 Geochemist Beth Herndon sorts samples of soil collected in Alaska. Herndon is studying how minerals in the permafrost affect the rate carbon dioxide and other greenhouse gases are released. CREDIT JEFF ST.CLAIR / WKSU

The permafrost samples she collected in Alaska need to be kept frozen, she says, because, "they’re composed of mostly decomposing plant material.”

Herndon is studying how the minerals in the soil effect that decomposition, “because those minerals can act to stabilize or sequester the carbon and nutrients and keep it potentially protected from plants or microorganisms.”

And why does that matter?

Herndon says the Arctic is warming twice as fast as the rest of the planet and the permafrost is thawing out.

“So a lot of that carbon that’s been stored in the soil for thousands of years is being converted to greenhouse gases,” says Herndon.

In fact, the carbon dioxide and methane expected to leak into the atmosphere from thawing permafrost over the next 50 years is measured in gigatons - that’s billions of tons, and Herndon says understanding the interaction of minerals in permafrost could help us predict the rate of climate change.

“This is one piece of the puzzle,” she says.

Changing weather types
Another piece is found one floor above her in the geography department at Kent State.

That’s where weather researcher Cameron Lee is testing a computer program that collects billions of pieces of historical weather data. “It then runs it through a process of classifying it into one of 11 weather types for every location on the globe.” 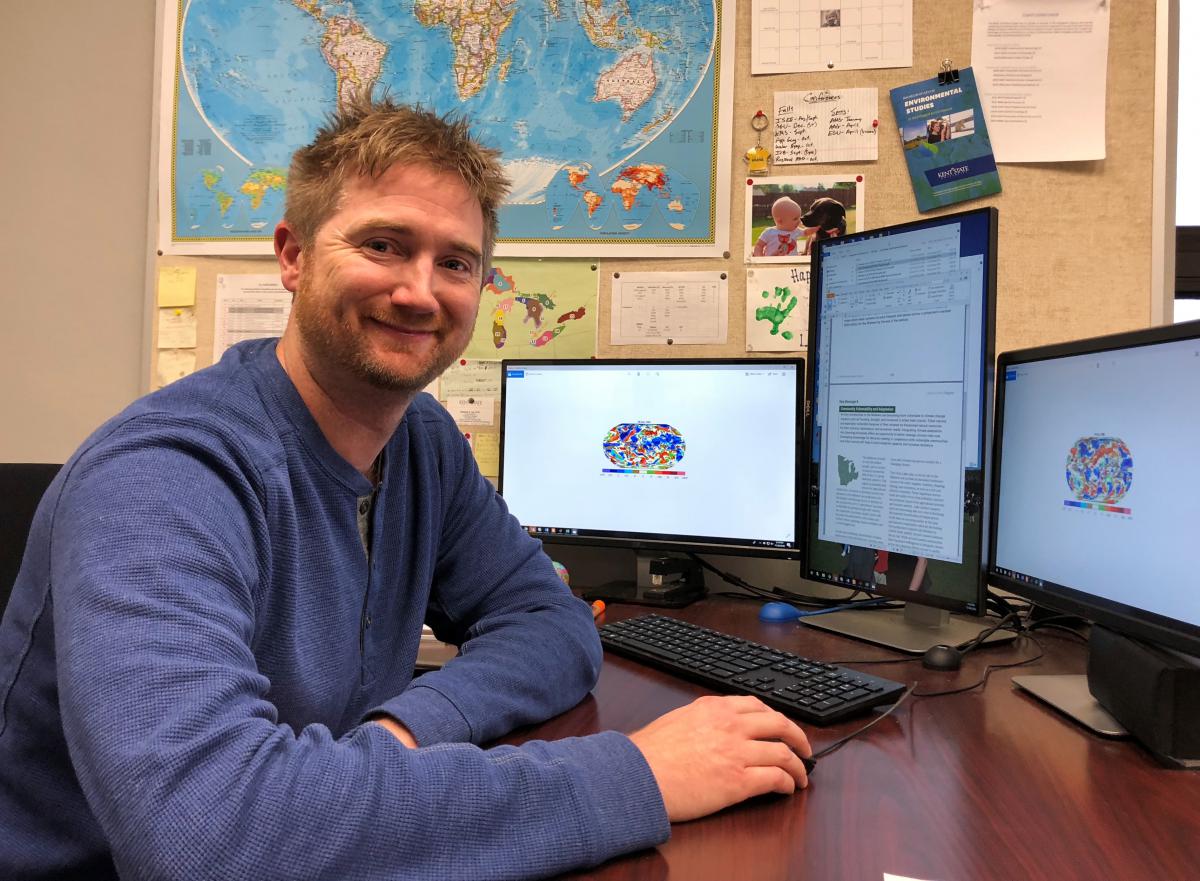 Lee has developed a system of that helps translate the large scale effects of climate change into something we can feel. “People aren’t just affected by temperature, or just affected by humidity, or by the wind," says Lee, "but all of these things happening simultaneously.” He boils these down into nine daily weather types, plus two transitional phases.

“So you can from dry and cold to hot and humid at the other end of the scale.”

Lee has mapped out daily weather conditions for all of North America collected over the past four decades.

His data shows dramatic changes in Northern Canada, where above-average temperatures now extend over nearly one third of the year.

Lee likens our warming climate to a baseball slugger on steroids, “the number of homeruns he hits is going to get that much better, the distance he hits the ball is going to be that much further," and likewise, once rare weather extremes are becoming the new normal.

We are seeing more and heavier rainfall, and “on average we’re seeing 20 less days per year of the lake freezing,” according to Matt Gray, chief of Cleveland’s office of sustainability.

"By doing these actions we create a much more resilient economy in Cleveland and everywhere else."

Gray recently unveiled the city’s updated plan to prepare for, and perhaps prevent the worst effects of climate change.

“Our goal is to reduce our emissions 80 percent by 2050, and it’s also about building more resilience to the impacts of climate change we’re already seeing,” says Gray.

“Growing lettuce in the Kinsman neighborhood is a lot less energy intensive than trucking it in from California,” says Gray.

He says sustainability touches all of the city’s revitalization efforts.

“By doing these actions we create a much more resilient economy in Cleveland and everywhere else.”

Act locally
The U.S. is the only country to back out of the Paris climate agreement to reduce greenhouse gas emissions.

But Gray says Cleveland is one of 400 US cities committed to the Paris goals, “and that makes me more hopeful that we have a chance of solving this crisis.”

But fewer than half believe scientists are convinced climate change is real, and that doubt of science-based fact could be the biggest threat of all.