What do NASA, Porsche, the National Park Service, Walt Disney World, New York Fashion and C-SPAN all have in common? Kent State University students gained valuable experience and showcased their education and skills this year at each.

Internships are a valuable real-world experience that provide students vital on-the-job training in their chosen fields. In the spring, summer and fall semesters of 2019 at Kent State, 2,740 students completed an internship for credit. This does not include the hundreds of internships Kent State students complete without credit. Kent State offers more than 540 programs of study, and the diverse experiential learning opportunities reflect that breadth.

“Internships provide amazing value by bridging the gap between academia and the real world,” said Alyssa Hall, senior cooperative education and internship coordinator. “More importantly, it helps define a student’s career path along the way. The internship is the experience that helps define what it is they want to do.”

Follow along with Kent State students in their recent internships that showcase their passion and desire to succeed. 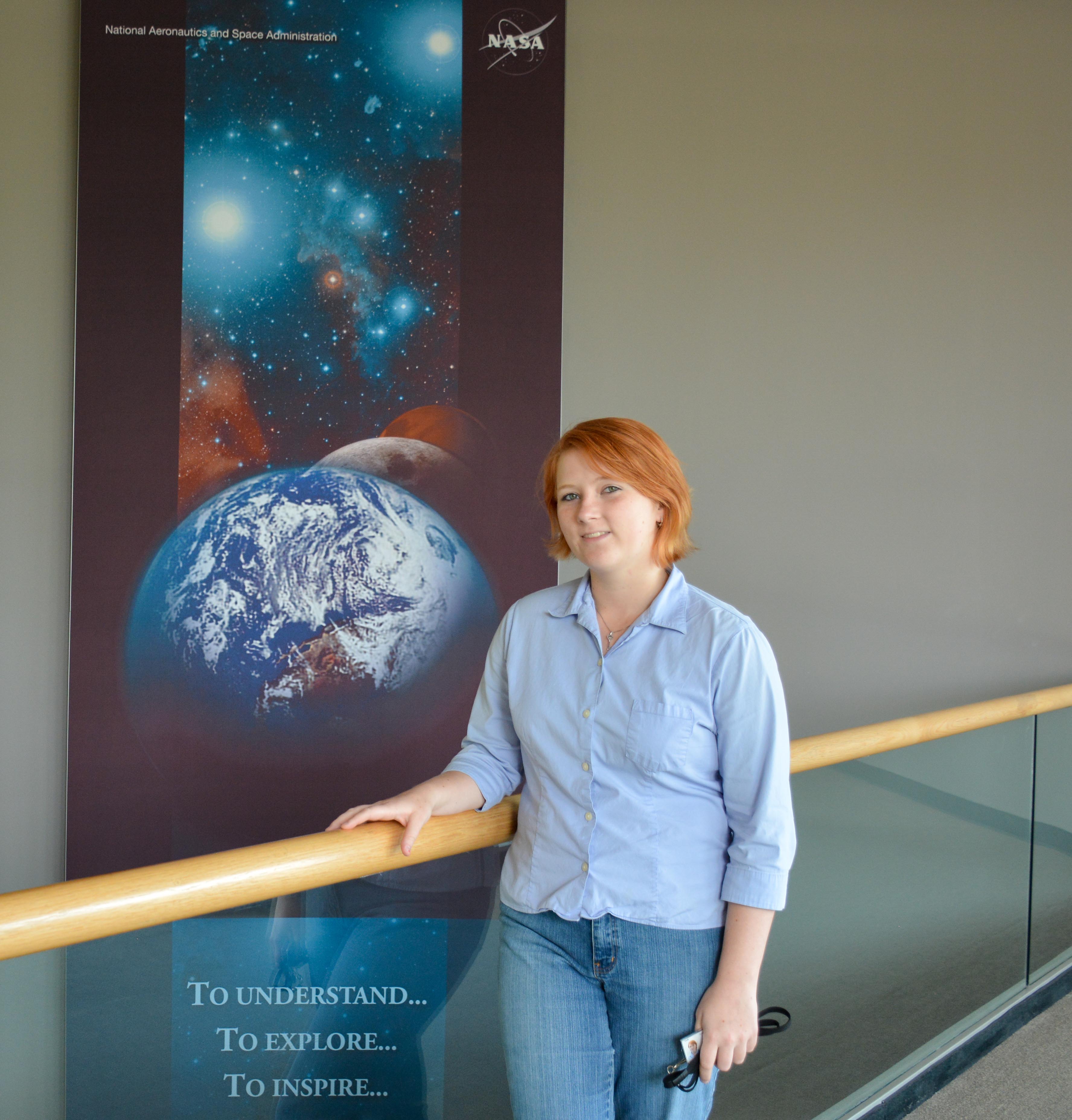 “My internship allowed me to gain experience in the field of my studies,” Roman said, “as well as expand my knowledge on other STEM topics.”

This summer, Roman worked on a High-Speed Delay-Tolerant Network Heat Sink and Packaging plan that will be sent up to the International Space Station and is a subset of the HiDRA project.

HiDRA serves as a space networking node that will provide a buffering and routing flight data interface servicing an array of scientific instruments at 100 billion bits per second.

“My internship helped me discover a new found passion for learning, as I can now see how the processes taught in class are applied to real-life problems,” Roman said.

Roman explains that without the help and support of her professors, she wouldn’t have the confidence or proper skill set to apply to her internship with NASA.

“College always felt like the last steps of education, just one more to go,” Roman said. “But now I realize it’s my first step into a larger world.” 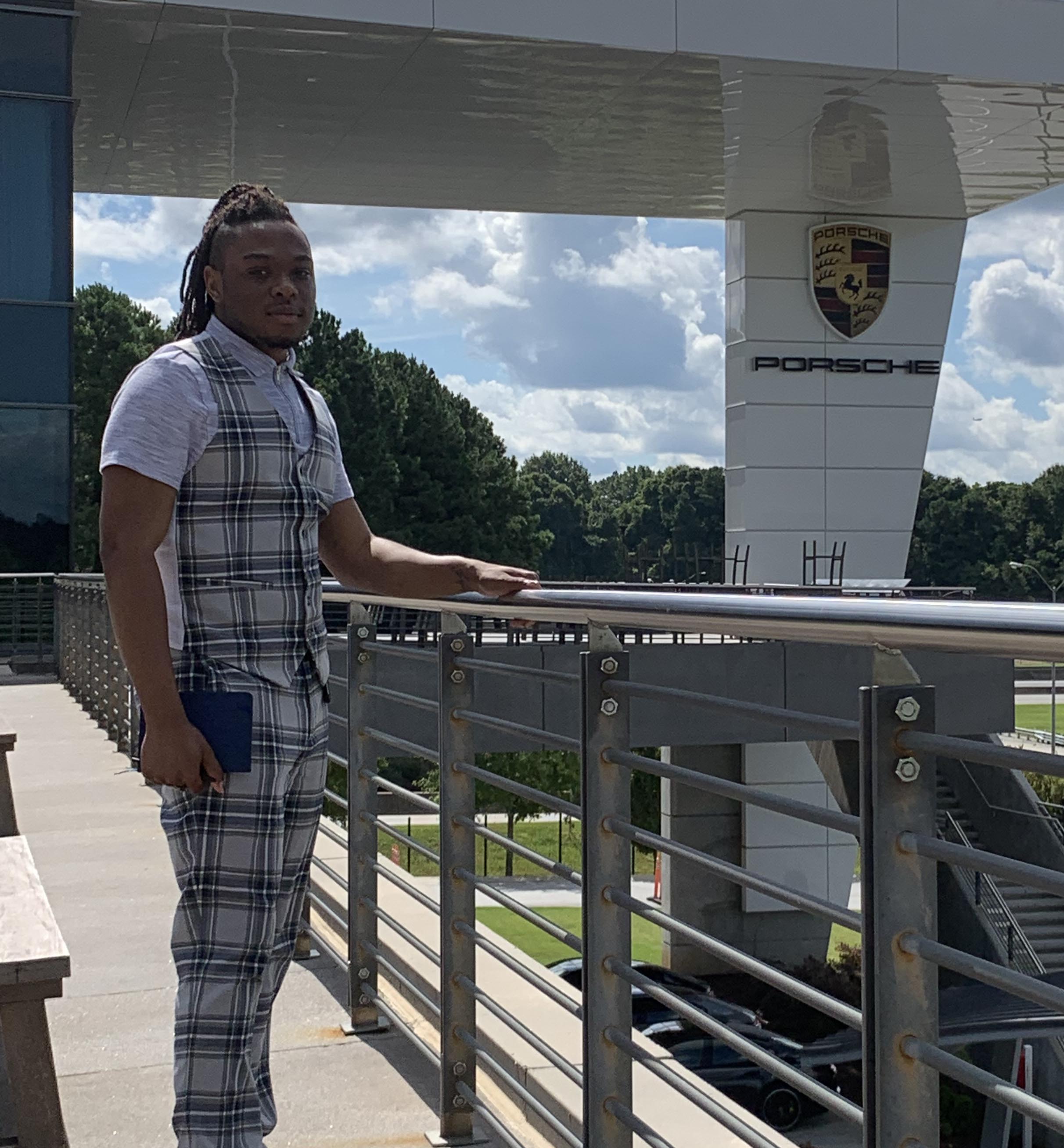 Berry’s largest responsibility was inquiring about the services local competitors and luxury hotels were offering their clientele in order to remain competitive.

In addition to communication with outside businesses, Berry also emphasized the value and impact of communicating with new contacts and his co-workers.

“There was a constant communication about our experiences in event planning, how to conduct site visits, types of certification and guidance on logistical details for different types of events like catering.”

Effective networking, Berry said, is how he acquired the internship to begin with. After a co-worker at Kent State’s Academic Diversity Outreach program referred Berry to the Hospitality Management Fair, he attended, eventually meeting two of his future managers.

“I was able to work in different areas and rotate around a bit, which allowed me to see different areas within event planning and reaffirmed what I wanted to focus on,” Berry said.

While working at the Porsche Experience Center, Berry also acquired another internship working with Kontrol Magazine, an African American magazine based in Atlanta that focuses on fashion, beauty and lifestyle. Berry credits the success of his internship and networking to the classes, professors and experiences he has encountered during his time at Kent State. 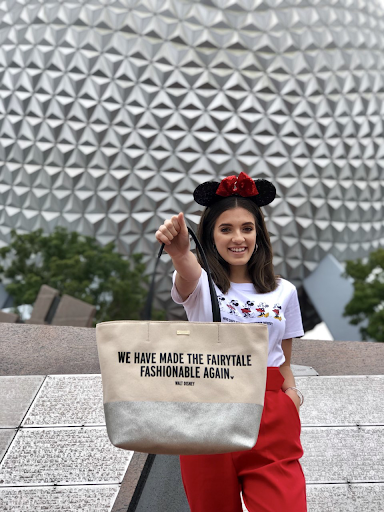 Emily Zappi, senior fashion merchandising major with a minor in fashion media, had the opportunity to intern at Walt Disney World in Orlando, Florida.

Zappi’s internship was a part of the Disney College Program, which offers college students the opportunity to work and grow within the company. She worked as a merchandising intern, which entailed working within the retail stores at the parks merchandising floors, assisting with sales, working behind the scenes to deliver the magic and helping with day-to-day tasks.

Zappi said she was drawn to an internship at Disney because so many of her childhood memories occurred there.

“For me, Disney reminds me of family and our special memories on our trips, so being able to create magic for other families was one of the best parts,” Zappi said.

“My internship at Disney was a drastically different scene from my previous semester spent in Florence, where I was completely submerged in the fashion industry,” Zappi said. “It was a great change of pace to learn other aspects of the industry, such as the business and marketing side that goes into entertainment and film.

“Working for a company as big as Disney is something I’ll forever be thankful for,” Zappi continued, and one of her biggest takeaways for her was the confidence she gained in working face-to-face with people from all around the world. “I was constantly out of my comfort zone, and it helped me grow as a person.”

The experience had a profound impact on Zappi.

“My internship with Disney was one of the greatest experiences of my life, and I know it’ll be different from anything I ever do again,” Zappi said. 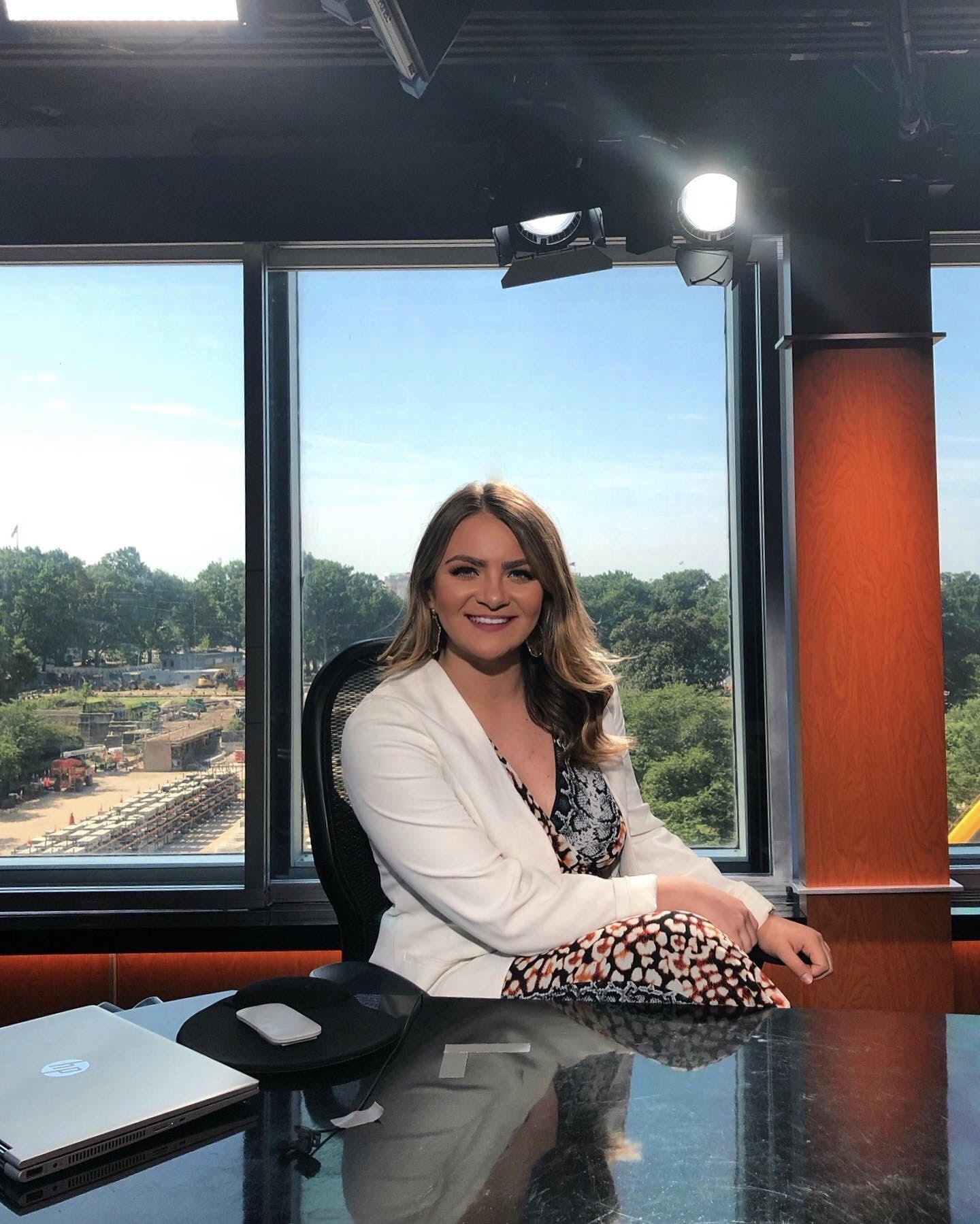 Caty Payette, senior broadcast journalism major with a minor in political science, spent her summer working as an intern for the Washington Journal at Cable-Satellite Public Affairs Network (C-SPAN) in Washington, D.C.

For the three months she spent interning, Payette had the opportunity to assist in the production and planning of the show “Washington Journal,” a daily morning call-in program where policymakers, journalists, reporters and other public affairs-related professionals call in and discuss top headlines of the day.

“I had the chance to look for guests who would be appropriate for our upcoming shows, as well as contacting them and asking them to be on the show,” Payette said. “When we had Congress people or guests on, I was responsible for them. I got to meet a lot of influential people.”

Payette’s prior experience as the general manager of TV2 and her work with Kent State Student Media prepared her for the tasks she completed at C-SPAN.

“It’s made me grateful for the education that I’ve received so far,” Payette said. “My education at Kent State set me apart from the 18 other interns I worked with significantly in regards to the way I’ve been able to process information, the deadlines we are given when doing interviews and stories, and also how we learn to communicate with other professionals.”

Payette plans to use her political science minor and journalistic background to work in the public policy sphere after graduation, and she can attribute her interest in public policy to her work at C-SPAN.

“This was by far one of the most interactive and unique internships I’ve ever had,” Payette said. “It was such a hands-on experience.” 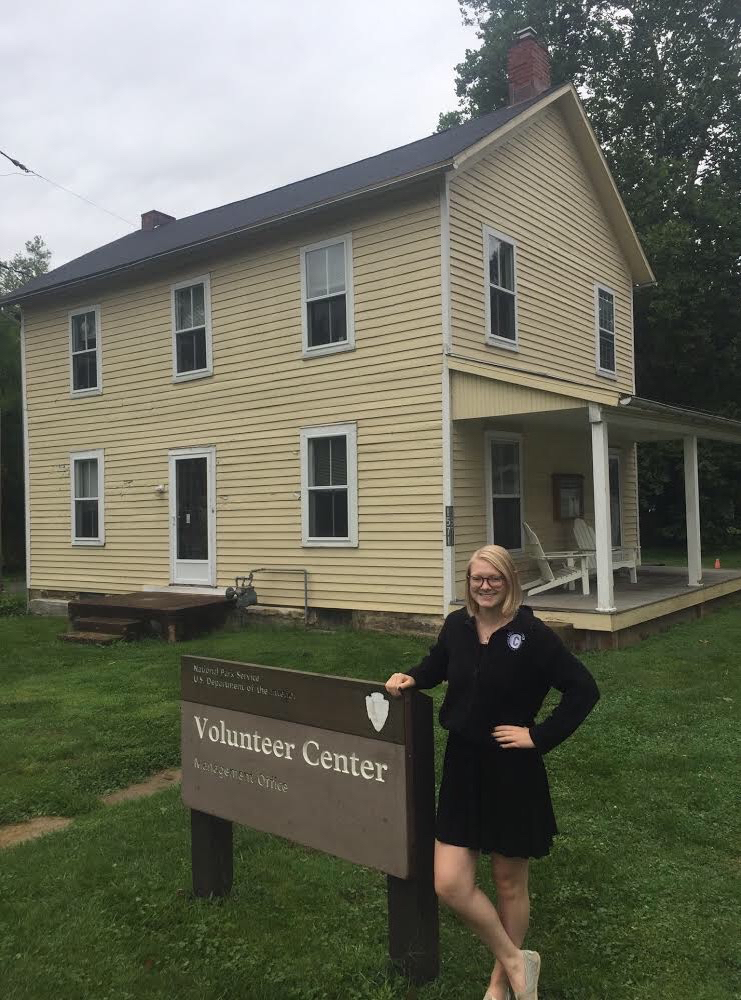 In April, Melissa Conrad, senior public relations major, began working as a volunteer services assistant with the Cuyahoga Valley National Park. Her job involved six months of planning events for volunteers and collaborating with others in the park system.

While working with the national park, Conrad created business cards, social media posts, billboards and brochures. She said she enjoyed planning events that involve 250-300 volunteers. These events, as she described them, involve coordinating parking, transportation and collecting specific documents for attendees.

Networking with prominent people is also a part of Conrad’s internship. During her time with the national park, she met Randy Gardner, chancellor of the Ohio Department of Higher Education.

“That [meeting with Chancellor Gardner] gave me a lot of people to speak to,” Conrad said. “A couple of them approached me afterward and talked to me about the national park. It was really cool because they’re professionals, and they were willing to give me the experience they talked to me about.”

Conrad advised students to apply for something they are passionate about.

“I applied for a bunch of corporate stuff,” Conrad said. “That is what I kind of thought I should be applying for. A lot of times, you feel like that’s your only way. I think I should have been focusing more on what I want rather than what other people want.” 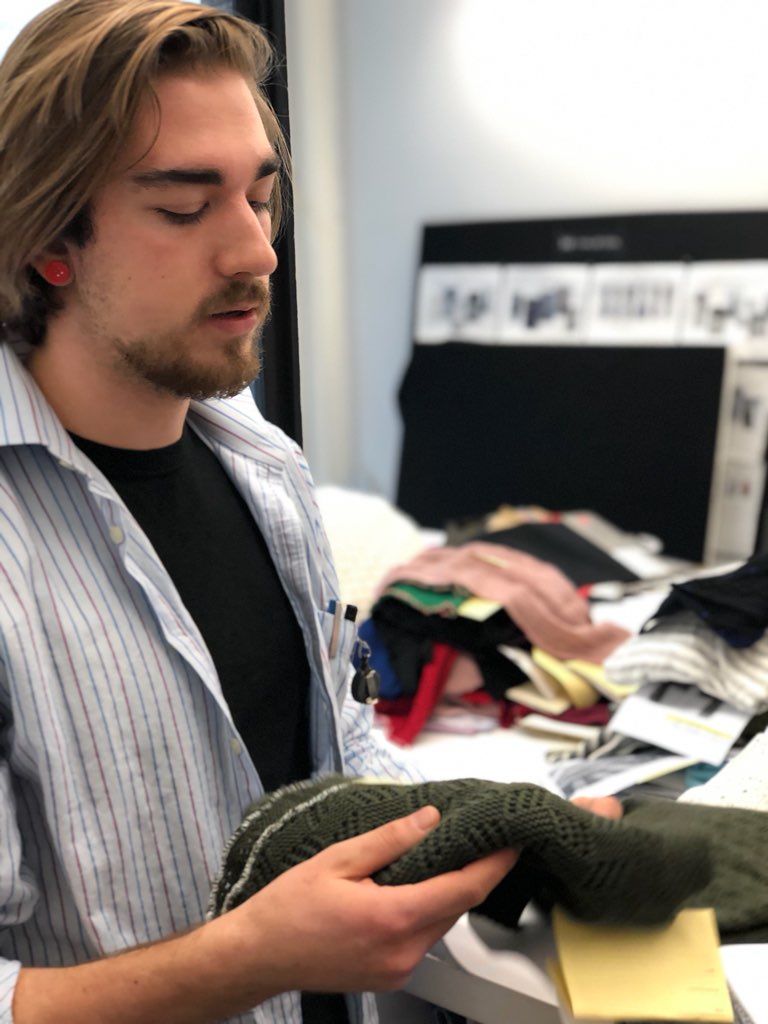 This year, Zachary Tatoczenko, senior fashion design major, had the opportunity to intern in New York City for H by Halston, a womenswear design firm.

Tatoczenko lived in New York for the spring 2019 semester in Hell’s Kitchen near the garment district, just blocks away from Times Square in what he described as the perfect location.

Tatoczenko took classes for the semester at Kent State’s NYC Studio while working for H by Halston.

“A lot of the work was computer based, which is mainly the industry at this point,” Tatoczenko said. “I was looking up inspirational images to design off of. I was doing flats, which are the technical garments, drawing figures with the clothes that I was making the flats of. I was also sample tracking. In the industry, we create a sweater, and then we send it out to the makers and then they send it back to us. I have to figure out where it’s going and how it’s going.”

For Tatoczenko, communication skills and learning to work on a team were two key takeaways he learned from his internship.

“It’s communication skills and figuring out how actual people work together,” Tatoczenko said. “Being a designer at the fashion school here, you’re working on your own. You can talk to your professors and students, but they’re not making it with you. But with the industry, they’re like, ‘This doesn’t look good right now, so let’s redesign it.’ All about working together and making it better together.”

During his internship, Tatoczenko designed sweaters and different garments for the brand. They truly made him feel a part of the team, he said. Tatoczenko also took time to explore the big city outside of working and going to school.

“A lot of it was people watching, and I went to a Yankees game,” Tatoczenko said. “It was just really cool to explore the different neighborhoods. I would go down to SoHo for part of the day, and then I’d go uptown.You really go from seeing the rich people wearing suits all day to the people that are just shooting dice on the corner.”

Tatoczenko looks forward to returning to New York to reconnect with his former colleagues and be back in the city. Tatoczenko’s internship made him fall even more in love with the fashion industry.

“I realized that I really love the fashion industry, and depending on where I go with it, I know I’m going to be happy and I have a team to fall back on,” Tatoczenko said. “And even with the school, I learned a lot through them, and that was impactful.”