RECYCLEMANIA, E-CYCLEMANIA AND SHRED-MANIA RETURN TO KENT STATE IN FEBRUARY AND MARCH

RecycleMania is a national competition among colleges and universities to promote waste reduction and recycling. Created in 2001, RecycleMania is a nonprofit organization made up of sustainability managers from a variety of universities who wanted a way to motivate students to recycle. This is the seventh consecutive year that Kent State is competing in RecycleMania.

At the end of the eight-week competition, schools are ranked in various categories based on which recycles the most and minimizes waste.

The diversion rate, the amount of recyclables pulled from recycling and trash streams, increased 10 percent from 2014 to 35 percent, Graham says. The goal for 2016 is to reach 45 percent at the end of the eight weeks. 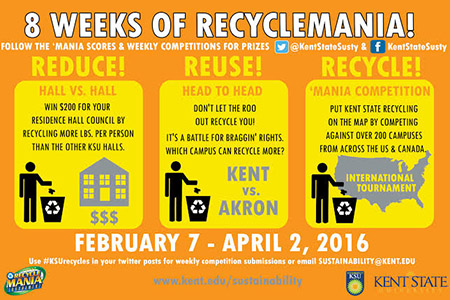 Kent State also will host competitions on campus, including the infamous head-to-head competition with the University of Akron, hall versus hall, custodial area competition, and weekly student and faculty and staff competitions.

To go along with RecycleMania, two events will be held in March to help contribute to recycling efforts. E-CycleMania will be held March 30 from 7:30 a.m. until 3 p.m. in the Administrative Services Building on the Kent Campus for students, faculty, staff and the Kent community to recycle their used electronics.

Shred-Mania also will be held March 30 from 7:30 a.m. until 1 p.m. in the Ice Arena parking lot for secure, on-site document destruction. Materials can range from spiral notebooks to paper bags and brochures, according to Melanie Knowles, Kent State’s sustainability manager.

Both Graham and Knowles are looking forward to reaching the ambitious goals they have set for this year.

“With RecycleMania, you are bringing the competition to it, and it gives the Kent State community a chance to be a team,” Knowles says.