'The True Cost' sparks discussion on sustainability in the fashion industry; The Kent Wired; October 27, 2017 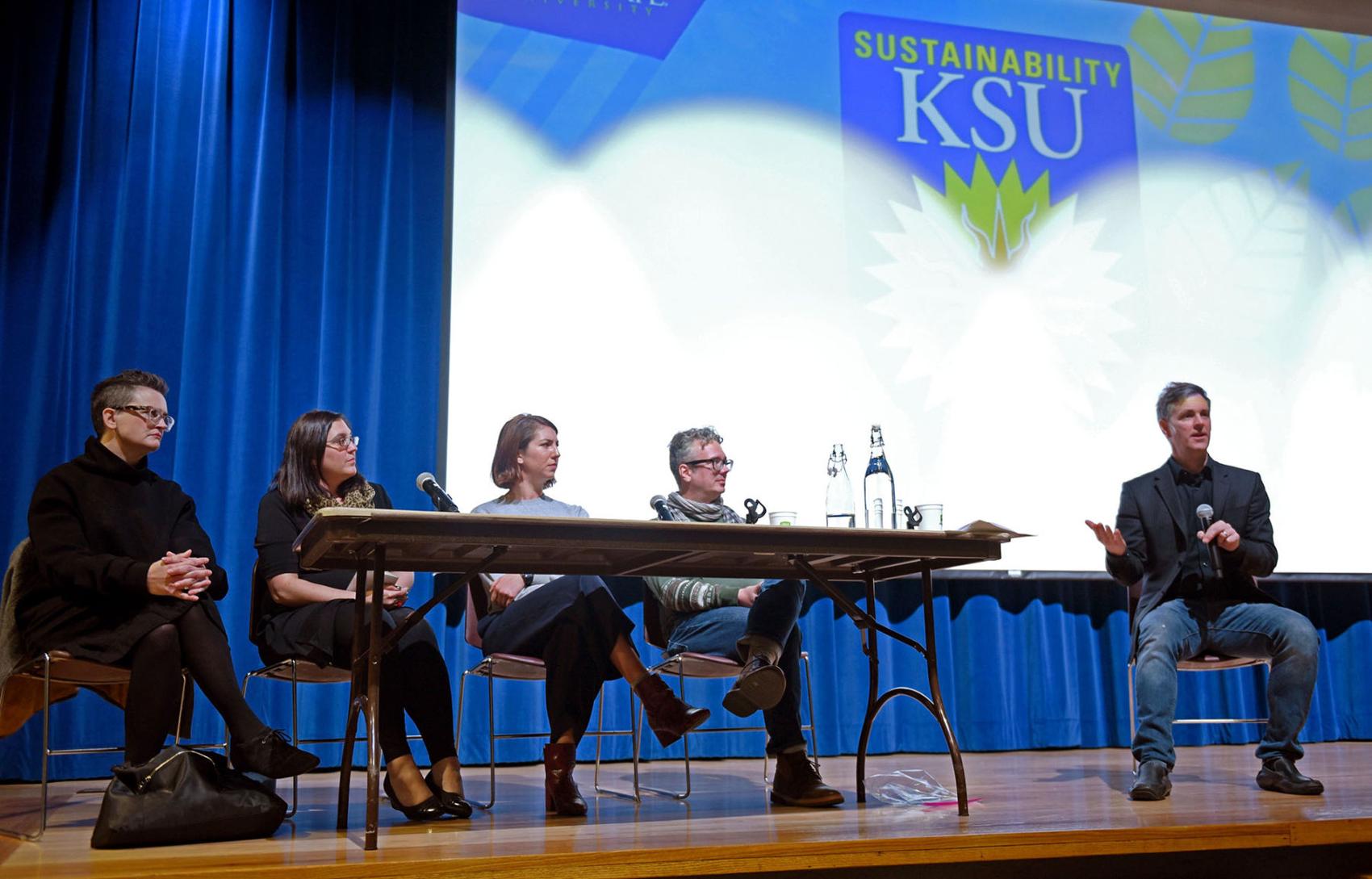 A discussion panel answers audience questions after the showing of “The True Cost” in the KIVA on Thursday Oct. 26, 2017. Matt Arnold

Sustainability month came to a close Thursday, with the presentation of the documentary “The True Cost,” which offers a view into the effects of the fashion industry on the rest of the world.

In the fashion industry, a demand for lower costs has led to using cheaper materials to create garments and paying lower wages to workers. The effects of these practices have created a notable impact on the planet. According to Newsweek, 84 percent of discarded clothes in the U.S. ended their life cycle “in a landfill or incinerator” in 2012.

On Thursday, the office of sustainability hosted a showing of “The True Cost” in the KIVA. It was followed by a panel Q&A, which was moderated by the director of the fashion school, J.R. Campbell.

“If you think about it, all of us, as humans pretty much across the planet, from the moment we’re born until the moment we die, we’re in some form of direct contact with textiles,” Campbell said.

How the fashion industry has contributed to these problems

Noël Palomo-Lovinski is an associate professor in the fashion school who teaches Sustainability in Fashion and sat on the panel during the event. She likens sustainability within the fashion industry to a “wicked problem,” one that can’t be solved easily because of changing or unknown circumstances.

“There’s really, literally, nothing in the fashion industry that we don’t do wrong,” she said. “The fiber, the carbon footprint that comes from getting all the different resources from all over the globe, the way we treat workers, the price that consumers expect to pay for clothing versus how much it costs to make clothing and how much we depend on branding.”

The supply chain for creating a garment is immense and involves shipment between production plants, typically spread around the globe, for each facet of the garment. The way the industry currently produces clothing creates carbon footprints and social implications, Palomo-Lovinski said.

This is before the consumer even gets the garment home, where the act of taking care of it creates more of an impact.

“For some articles of clothing, it can be 75 percent of the actual energy or water usage is when the consumer has it at home and takes care of it,” Palomo-Lovinski said. “And then, people throw it away.”

Once consumers have decided they no longer need the item, Palomo-Lovinski said it either ends up in landfills or goes overseas. She estimates that 85 percent of discarded clothing ends up in other countries, where it suppresses the ability for the country to create it’s own textiles and garments, damaging its economy.

“The United States is the number one perpetrator of all of this because we consume more than anyone else,” Palomo-Lovinski said. “Our carbon footprint is heavier. We use more resources and we pay the least amount for them.”

William Perrine is a senior lecturer in the fashion school whose focus is on the human impact of the industry. He teaches the course Fair Trade and Social Justice in the Apparel Industry, where he discusses the fair trade aspect of the industry.

“Fair trade is a different model of how things gets produced,” Perrine said. “The supply chain for the apparel industry is so complicated.”

Perrine said each of the facets of a garment, from the fabric to the buttons, come from different countries. They’re then all sent to one country where they are finished or cut and then shipped to another country to be sold.

“Each step along the way is an opportunity for something bad to happen,” he said.

In some cases, the impact is on the environment, like India’s holiest river, the Ganges, where nearby leather production plants have contaminated the water with chromium, as shown in “The True Cost.” In other cases, the price is paid in lives lost.

In 2013, a factory in Bangladesh collapsed, killing over a thousand workers. Survivors of the collapse said they had pointed out flaws in the structure to their superiors who ignored a call to evacuate.

What the industry is doing to create more sustainable practices

The brunt of the fashion industry’s ability for change falls on the shoulders of researchers and students.

In the Fashion School, a research group is made up of professors of fashion merchandising and fashion design who collaborate on research in sustainability.

However, Palomo-Lovinski said the university could be doing more to make sustainable practices more important.

“We have a sustainability department,” she said, referencing the Office of Sustainability. “But having more support and more administrative focus on making this campus as efficient as possible would only make economic sense.”

In Rockwell Hall, the administration is working to find a facility that will appropriately recycle their textile waste, rather than sending it overseas. Recycled textile waste can be used to make insulation for buildings.

“I would like to see more of an emphasis on sustainable practices as a university-wide initiative,” Palomo-Lovinski said.

In order for sustainable practices to become a staple within the industry, consumers and industry workers alike need to find a passion for it. Palomo-Lovinski encourages her students to take an interest in her classes by telling them the reality of the harmful effects.

“That is a huge eye opener for a lot of my students,” she said. “They get really passionate about it. They didn’t know that it was such a big deal.”

Tahany Huerta, a senior fashion design major who also spoke on the panel, said she’d like to see more opportunities for students to take classes about sustainability both in and out of the fashion department. She hopes for classes that encourage students to think of ways of solving the issues in sustainability.

“If people aren’t being asked to solve these problems, then no one is gonna step up to the plate or even realize that these problems exist,” Huerta said.

She’d also like to see fashion students be encouraged to learn about sustainability as freshmen. During the panel, Huerta said she didn’t have an interest in sustainability when she started at Kent, but has since worked to change her buying habits.

“I wish I would have been taught about this even sooner because I feel like I could have been even farther along, design-wise, into considering sustainability,” Huerta said.

Huerta is working on research to prove that consumers would be open to a change from cotton to hemp, a textile that is considerably more sustainable.

“It’s partly education, partly it’s making people become more aware,” Campbell said. “And then also thinking about how you can start to change even the small things.”

The fair trade model offers a smaller chain of productivity, said Perrine. The chain of supply in the garment industry is currently a five or six step process that involves multiple countries and contractors, where a fair trade model would create long term contracts with one country or village and two or three steps.

“The fair trade model can’t be adapted easily to mass production,” he said.

Perrine worked in the industry for 14 years before he became a teacher. His dissertation focused on fair trade.

“I made the decision, if I was gonna put this much effort and work into creating this document that nobody is ever going to read, that I wanted to gain some knowledge that would help people,” Perrine said.

He tells his senior class that his goal is for them is to understand that their decisions as industry professionals are going to affect people that they will never meet.

“It’s your decision that allows these things to happen, unfortunately," Perrine said. "Or not happen.”

Palomo-Lovinski and Perrine both emphasized the importance for consumers to understand the failings of fast fashion brands like Zara and H&M and put in research to endorse brands that are using sustainable practices.

Perrine echoed the sentiment with the phrase “one purchase, one vote.”

“Every time you go to a store and buy something from them, you’re saying ‘Yes, I believe in your practices and how you’re running your business,’” he said. “So, if you don’t shop at a fast fashion store and you buy something that’s maybe a little more expensive but is better made and is gonna last longer, I think that’s a better way to go.”

A way to prolong the life cycle of a garment is to buy from thrift stores or donate the clothing. Even this, though, can lead to a pitfall of wastefulness.

“The True Cost” highlighted that only about 10 percent of clothing donated to places like Goodwill actually get sold by the store. The rest will still end up shipped overseas or sent to a landfill.

Perrine suggested donating instead to places where you know exactly who the clothes are going to.

“I take [used clothes] to a local church in east Cleveland, St. Philomena, and they give them directly to the people in the neighborhood in need,” he said.

Face said the clothing center repurposes about 90 percent of what they take in.

The most cost effective way to be sustainable in your own shopping habits? Buying less.

“Overall, just purchasing less is a big impact because I think people don’t even realize how much they’re purchasing that they don’t really need,” Huerta said.

Perrine tells his students that everyone could go a year without buying new clothes.

“Spend a little bit more on something that’s gonna be in style a little bit longer,” he said. “Fix your clothes if they tear.”

Huerta said it may seem counterintuitive for a design student to encourage consumers to spend less money by buying fewer goods.