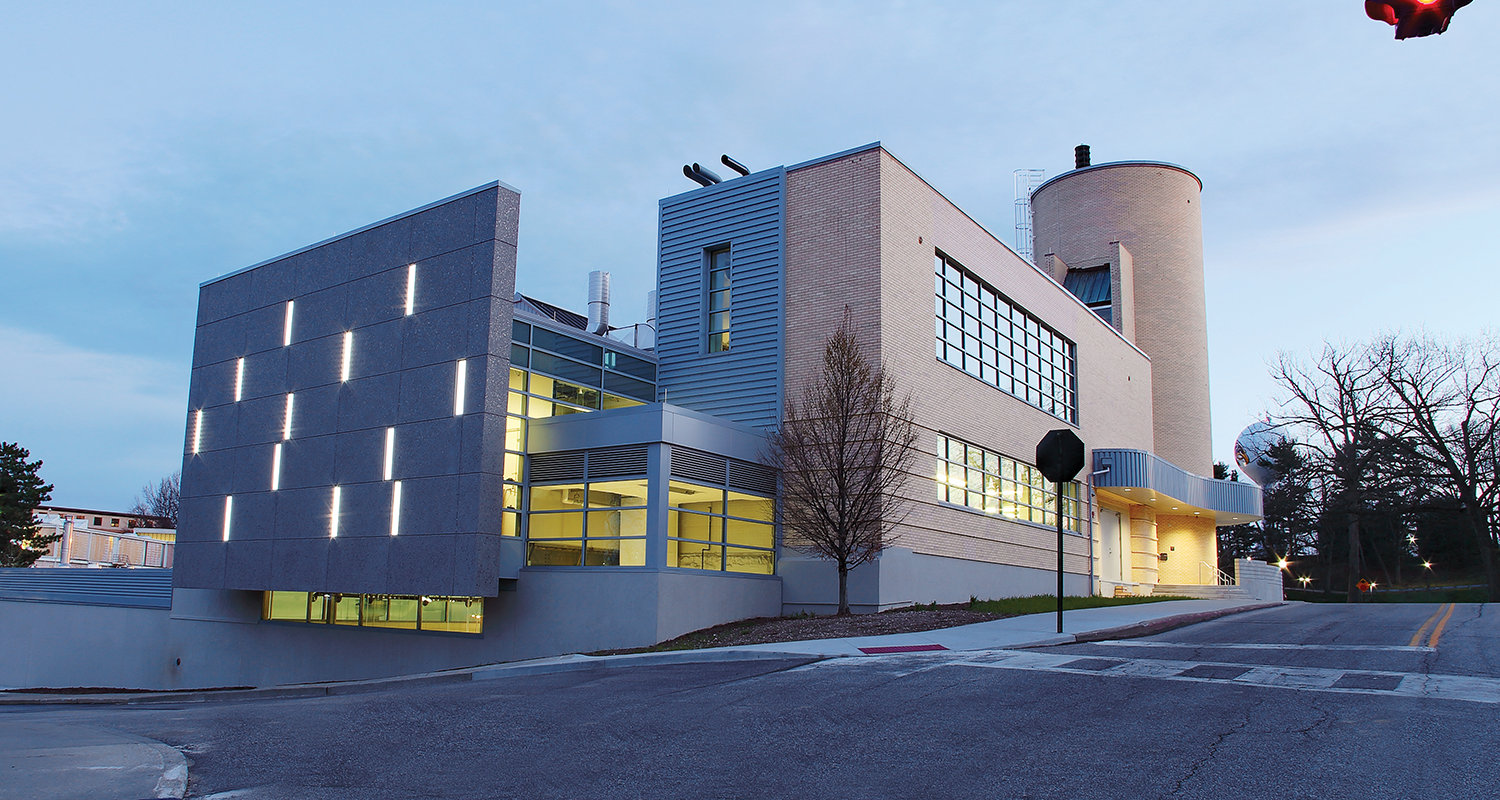 After years in the making, the Center for the Visual Arts—which unites programs in art education, art history and all of the studio arts in new and repurposed spaces—is now complete! Here’s a glimpse of the School of Art’s innovative new home.

Once dispersed across the Kent Campus, all the programs and disciplines in the School of Art are together for the first time since 1960 in the new Center for the Visual Arts. The Kent State community celebrated the center’s opening in May, as they gathered in the new glass-enclosed central lobby that connects two renovated, repurposed buildings—the Art Annex/former Heating Plant and Van Deusen Hall—before heading off to explore the building’s expanse.

The 127,900-square-foot facility—twice the length of a football field—houses classrooms, galleries and a lecture hall, plus dedicated studios and spaces for major programs in art education, art history, ceramics, drawing, glass, jewelry/metals/enameling, painting, print media and photography, sculpture and textiles, as well as the cross-disciplinary foundations program. Part of the Foundations of Excellence initiative, the building itself is a learning resource that will enable Kent State students to easily share ideas and collaborate across disciplines.

A deft blend of old and new construction, the $33.5 million complex—a LEED registered project that aims to be Silver certified for efficiency and sustainability—was designed by Payto Architects of Cleveland. For principal of the firm Jerry Payto, B. Arch. ’68, who majored in architecture with a minor in art, “It brings things full circle for me, personally and professionally. It’s probably been the most gratifying project that I’ll experience in my lifetime.”

In an essay about the project, excerpted on the following pages from a booklet about the center’s opening, Christine Havice, Ph.D., former director of the School of Art—who retired in June after seeing her vision come to life—reflects on the past and rejoices in the center’s future:

The new Center for the Visual Arts is the synergistic product of two older campus buildings: the original Heating Plant of 1916 and the post-war Van Deusen Hall for industrial arts, completed in 1950.

Once on the edge of the Kent Campus, the old Heating Plant, with its graceful façade, is now at its heart. It was always a multipurpose building, generating heat from coal but also furnishing space for manual training instruction.

The front of the building was reoriented between 1938 and 1940, to face Terrace Drive and included additional classroom spaces. A second smokestack was added in the 1960s to meet increased energy demands, while growing programs in architecture and art occupied the classroom spaces.

Professor Clinton Van Deusen was head of the manual training program at the founding of Kent College. When the renamed industrial arts program grew exponentially after World War II—like so many at Kent State and around the United States following the G.I. Bill—it needed more dedicated space. The new building, completed in 1950, was later named to honor Professor Van Deusen. A certain number of art classes were taught there as well, with work exhibited in a gallery on the first floor near the entry lobby.

The School of Art gained its own dedicated space in 1972 with the opening of the present Art Building designed by Australian architect John Andrews, who was creating a similar structure at that exact time at Harvard University.

However, even with the new structure, some School of Art programs still had to be conducted in other campus buildings, as well as off campus. Undergraduate art students got a healthy workout traveling from one studio to another, while graduate students, who tend to specialize in one discipline and so concentrate their time in one studio, often worked in relative isolation from one another.

This is not just a space for individuals who are majoring in the arts; this is a place where we can share the arts with our entire community.ˮ
—President Beverly Warren

The end to this dispersion was foreseen when it was decided in 2008 to bring all art programs together. The old Heating Plant—made redundant after the opening of the Kent State University Power Plant on Summit Street—and the soon-to-be-abandoned Van Deusen Hall offered opportunities for serious reorganization. Joined by new construction that echoes the curve of Terrace Drive and fronting on that main artery, the two older, industrial structures have been, in sequence, totally gutted and rebuilt inside their venerable shells.
The result is a palimpsest, overlaid traces of evolving Kent State structures across a full century. Many of the admirable original features of both older buildings have been carefully preserved, such as the round-headed windows of the 1916 core of the Heating Plant, along with the interior relief medallions celebrating great names in the history of industrial design (among them Watt and Edison). The 1940 silo that fed the three huge boilers still bears the calibrations of hours of heat left as the coal was burnt. And in Van Deusen Hall, the characteristic industrial sawtooth roofline with north-facing skylights, as well as the period terrazzo floors of its hallways, mark a mid-century structure where “industrial” and “arts” were conjoined.

At both ends of today’s Center for the Visual Arts, we encounter archaeological moments where sutures, breakthroughs, strata and contrasting materials witness the history of the two original buildings, even as this new one was created.

To the great credit of the designers at Payto Architects, these moments and the first century of Kent State are celebrated visibly and proudly in the Center for the Visual Arts, as we do once again in dedicating our new home under one roof.

—Christine Havice, Ph.D., former director of the School of Art