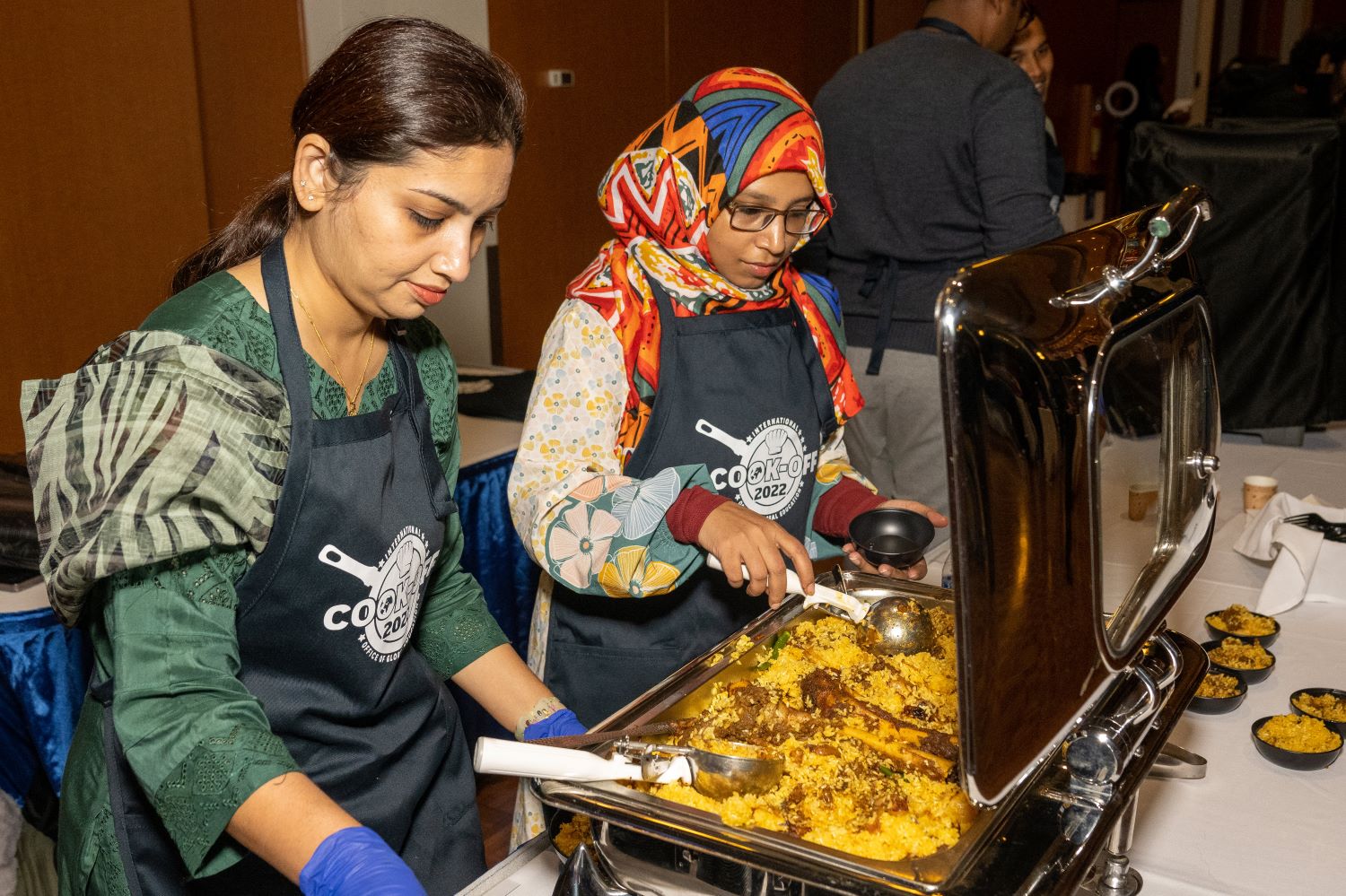 Two teams from sub-Saharan Africa made their debut on Thursday at Kent State University’s annual International Cook-off sponsored by the Office of Global Education. 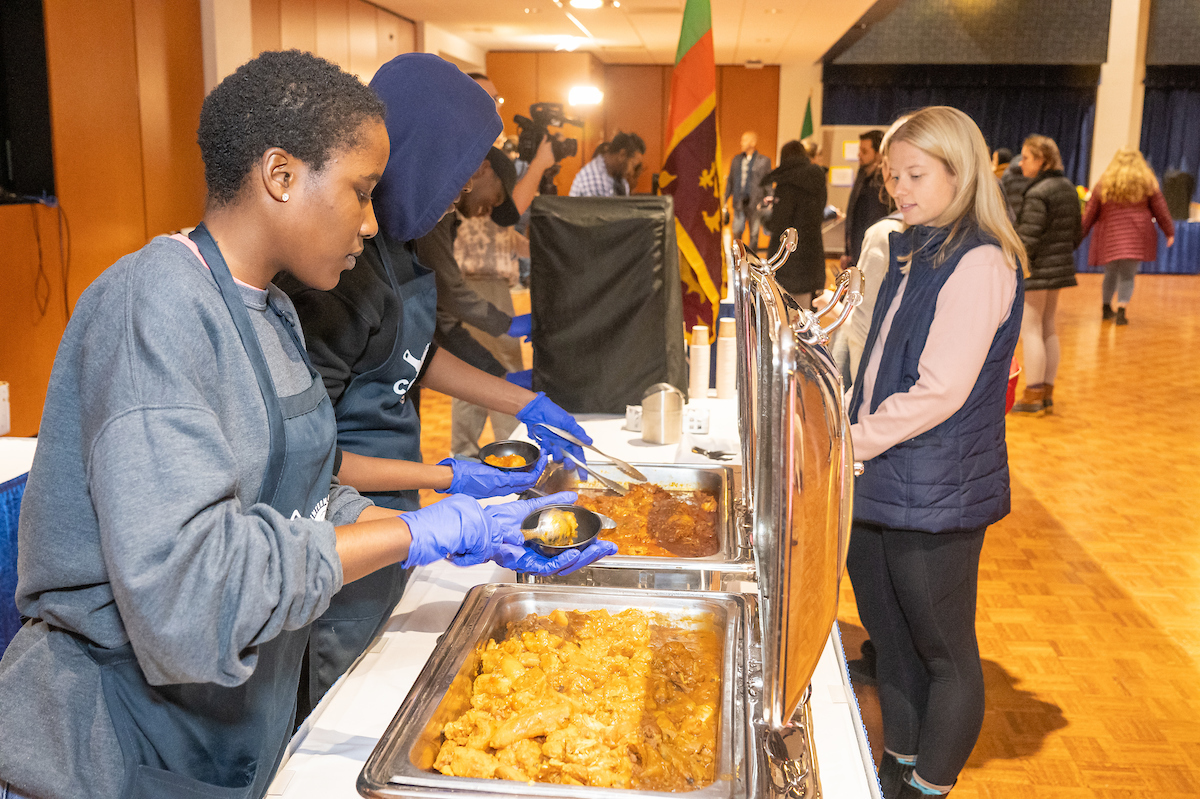 The entry of Team Rwanda and Team Nigeria into the annual cooking contest reflects Kent State’s growing relations in sub-Saharan Africa which are resulting in new groups of international students on campus. The Rwandan students are part of a group of 12 undergraduates sponsored by the Rwandan government who arrived at Kent State for the fall semester to pursue degrees. 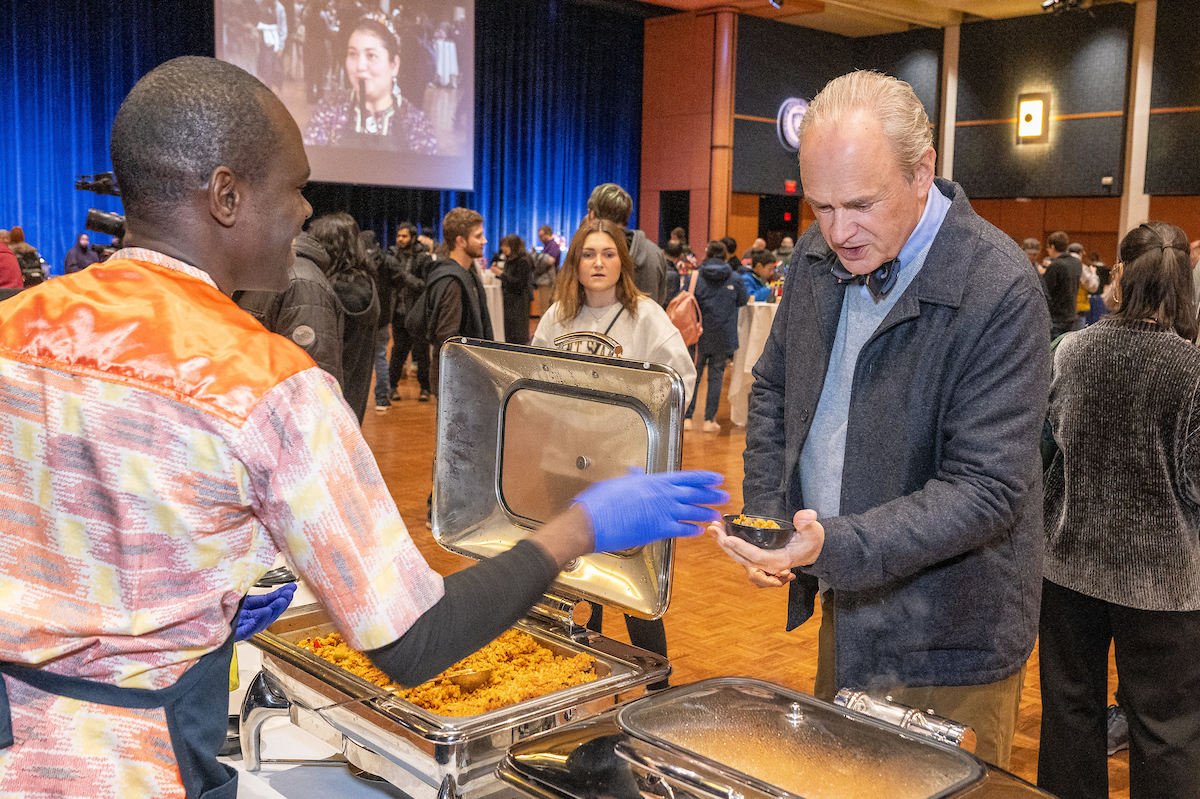 Team Sri Lanka took first place honors at the event, for its dish of milk rice with cashew curry and chicken, along with ginger tea to drink. Finishing second was Team India, which served the classic Indian dish biryani along with a mango lassi drink. Team Rwanda took third-place honors serving igisafuriya, a native dish of chicken thighs stewed with tomatoes and plantains, along with ginger tea.

Rounding out the competition were Team Central Asia, which served a spicy pilaf studded with meat, and Team Nigeria, which offered jollof rice and fried chicken with zobo juice, made from steeping hibiscus flower buds with pineapple.

Kent State President Todd Diacon was one of the first in line to sample the Rwandan fare, proclaiming it “really good,” as he dove his fork into his dish, and adding that he was getting hints of smoky flavor in the background. “I’m going to try them all,” the president said.

Kelum Perera, a member of the Sri Lankan team and a fifth-year doctoral student studying at the Advanced Materials and Liquid Crystal Institute, said he felt confident in the team’s food and noted how Sri Lanka had taken part in previous cook-offs. 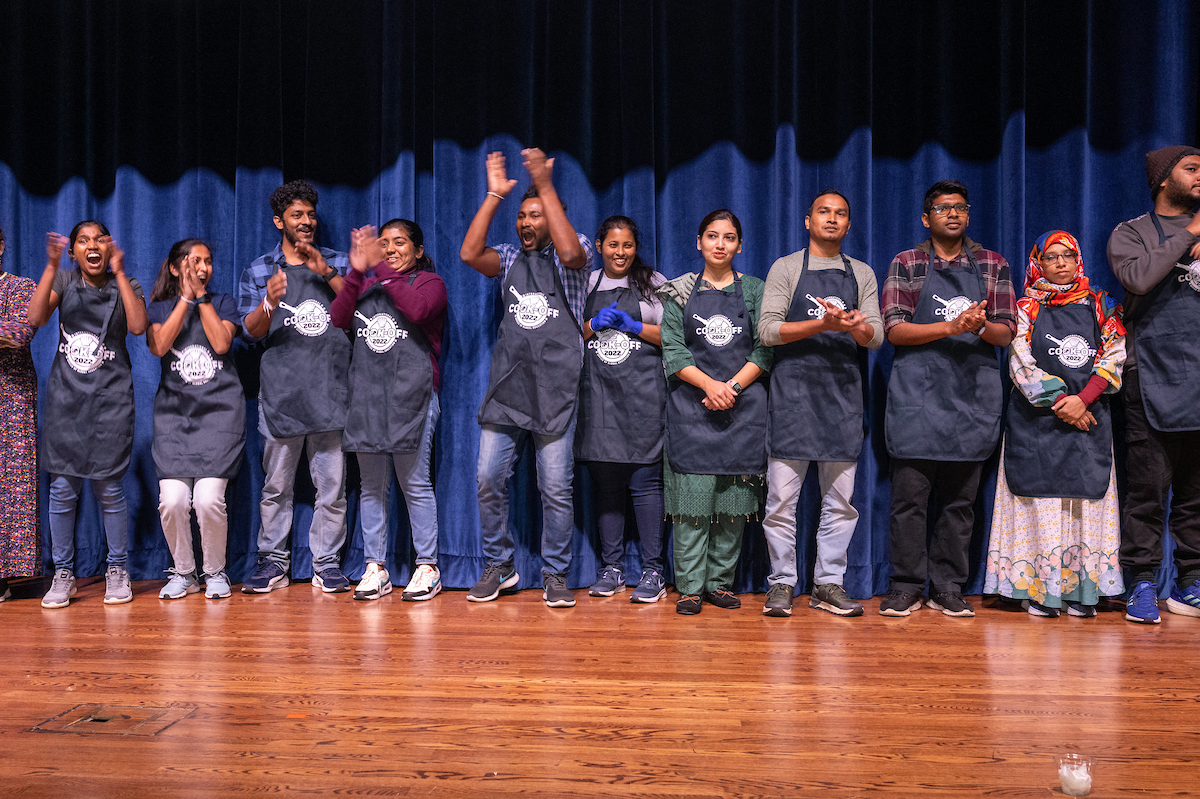 Marcello Fantoni, vice president for Global Education, said he was proud to see the vibrant turnout in the Kent State Ballroom for the event.

“This very much reflects who we are at Kent State. We welcome all kinds of students, we value them and that makes us richer for it,” he said. “This event perfectly reflects what’s in our DNA as a university.”

Sarah Malcolm, executive director of the Office of Global Education (OGE), said the cook-off is held every November as part of International Education Week. 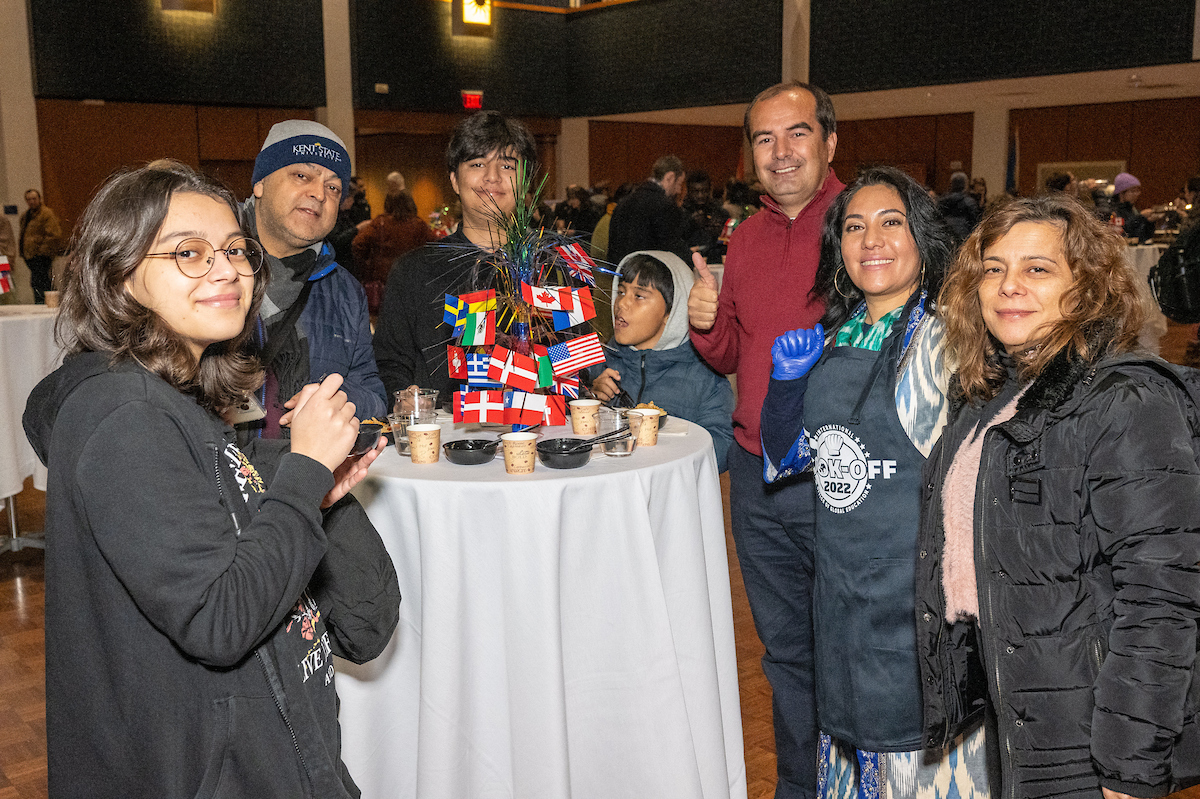 “The International Cook-off is the Office of Global Education's signature event. International students look forward to participating and attending the event each year,” she said, “It represents an opportunity to bring together people from around the world and establish community using food as a starting point for conversations and connections.”

Malcolm, who has worked for Global Education since 2011, said the event has been happening for many years.

“There are many legends about the cook-off that pre-date anyone currently working in OGE, so we don't know when it first got started or what the impetus was for the first event. However, we know that international students look forward to it every year and often hear about the event even before arriving at Kent State. Students often arrive at Kent State excited about the cook-off and ready to form a team,” Malcolm said. 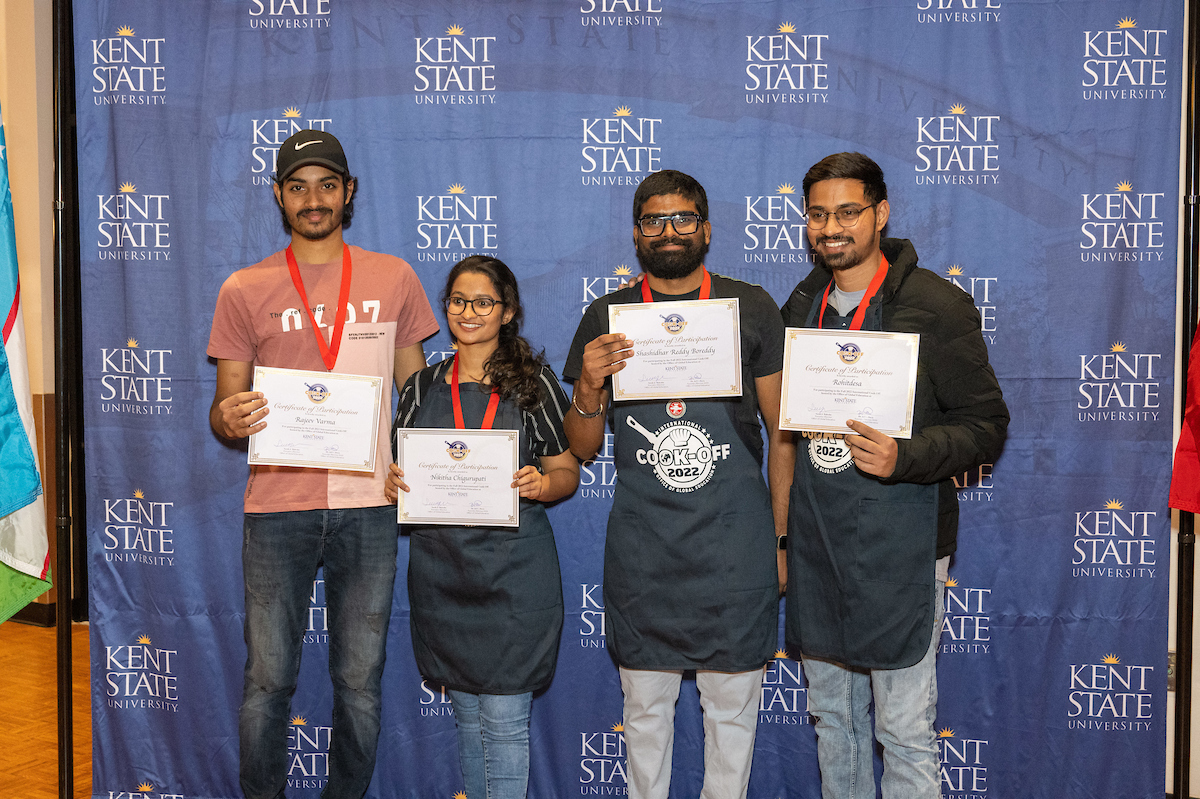 This year marks the first time that teams from sub-Saharan have competed, although there previously have been teams from Northern Africa in the competition, she said.

As they spent time preparing their dishes earlier in the week, team members were excited about the competition.

“I like experiencing new things. I’m excited that other people will like our food and I’m excited about representing our country,” said Team Rwanda leader Joshua Mugisha. 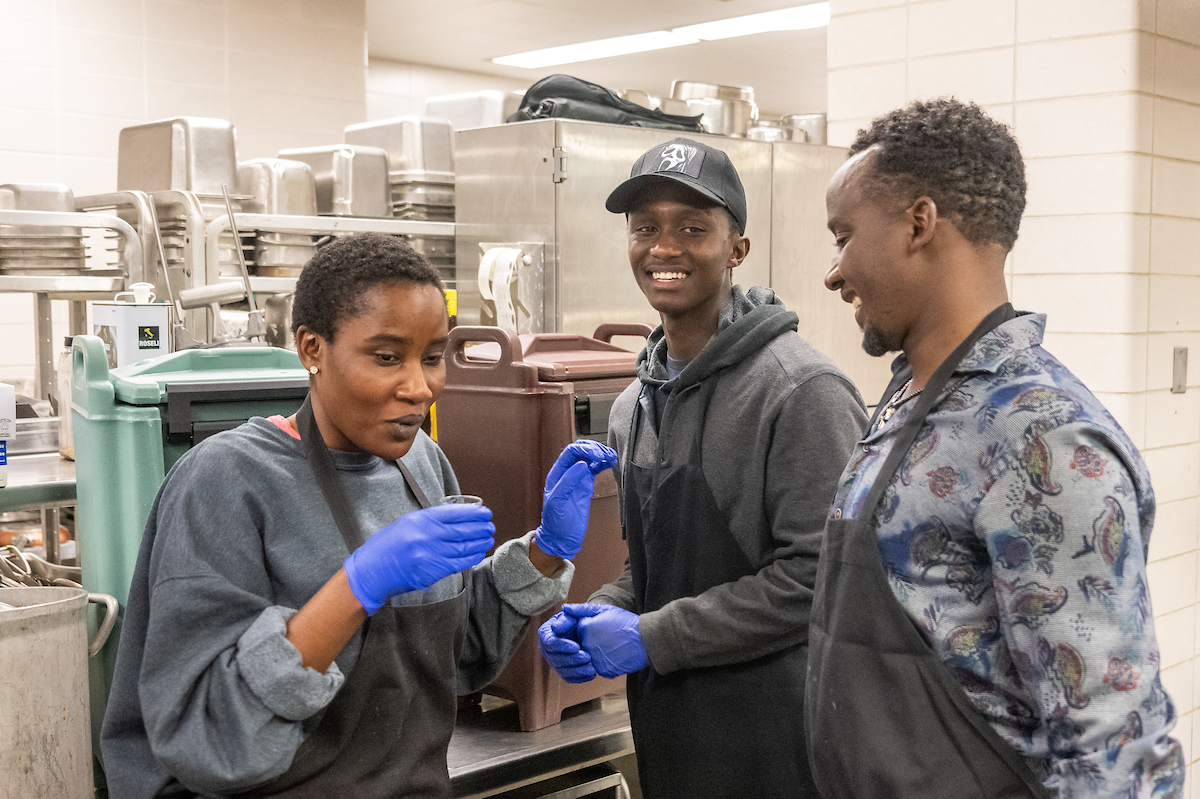 Mugisha said he was pleased that most of the reviews of their food were “very positive.” 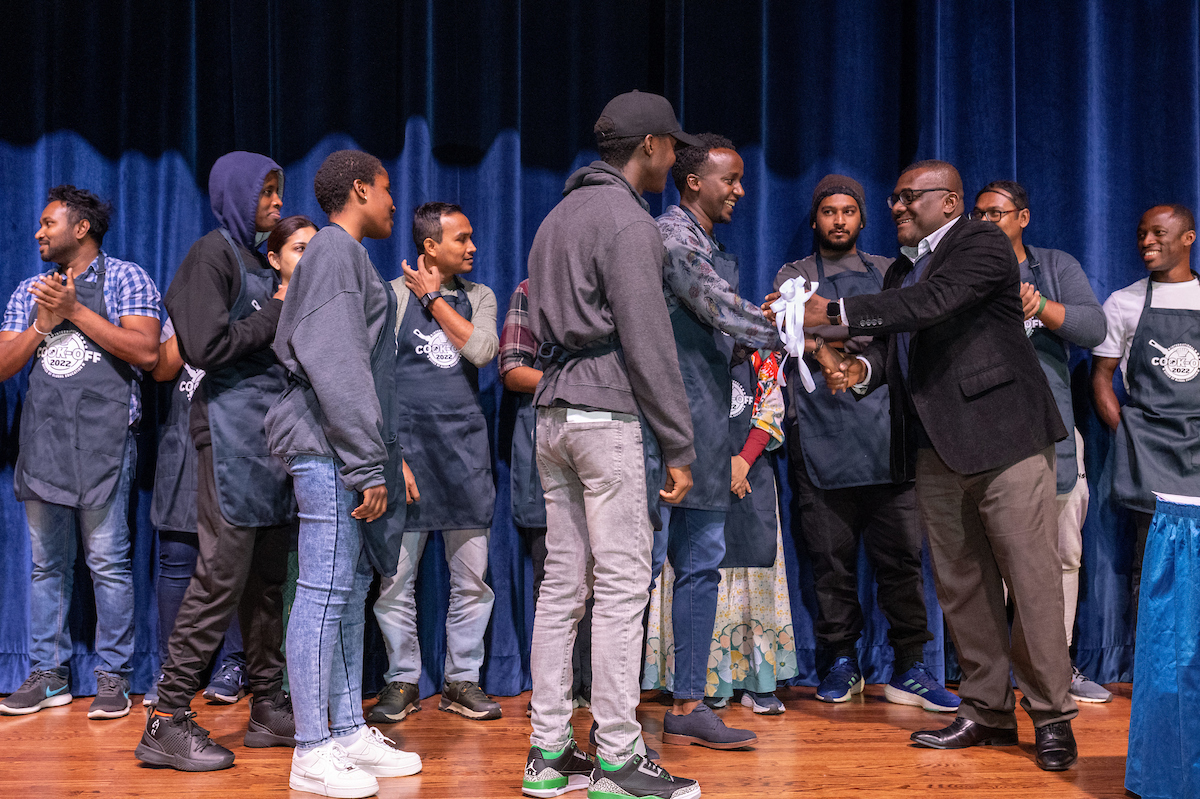 Brent Hanni, the executive catering chef for University Culinary Services, said he begins working with the teams about a month before the cook-off, gathering their recipes and reviewing the types of ingredients he will need to order for the dishes.

The seasonings and herbs that are common in other countries often are not available here, but with the assistance of online ordering, Hanni said he has been able to source most ingredients the teams requested.

He also helps to familiarize the students with the commercial kitchen where they spent two days prepping and cooking their dishes.

Mercy Oso, a first-year graduate student in biomedical sciences and a member of Team Nigeria, said jollof rice was truly a national dish in Nigeria, as it is served in all parts of the country. The spices and seasonings, which may include hot pepper, curry, nutmeg and thyme, may differ regionally and depend on the cook’s taste. 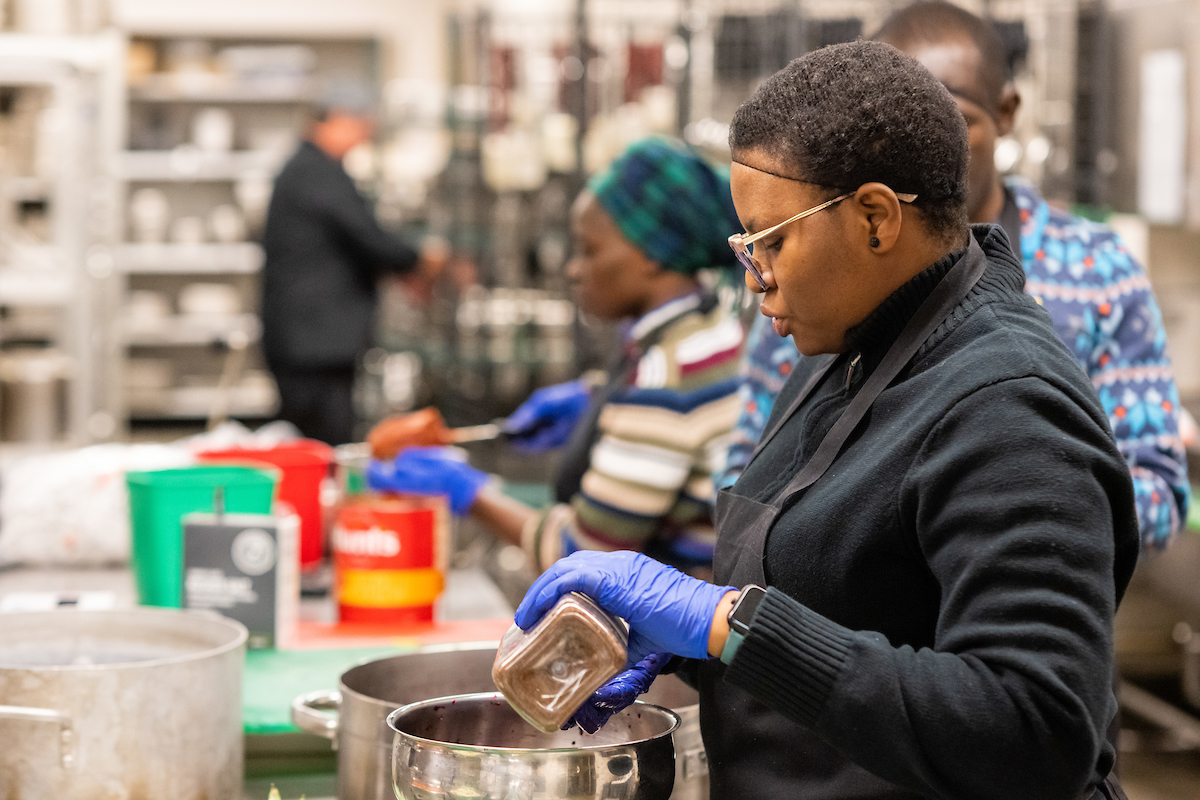 Several hundred students, faculty, staff and their family members attended Thursday’s event to sample the international cuisine, which also included the showing of a video highlighting Kent State as the recipient of the 2022 Senator Paul Simon Award for Comprehensive Internationalization from NAFSA: Association of International Educators.

Ethan Wagner, a senior nursing major from Columbus, Ohio, was enjoying all the dishes. “I think all the food is so beautiful and so colorful,” he said. Wagner will be heading to Costa Rica next semester to take part in the program Spanish for Health Care Providers and said he put off graduating to have the study abroad experience. 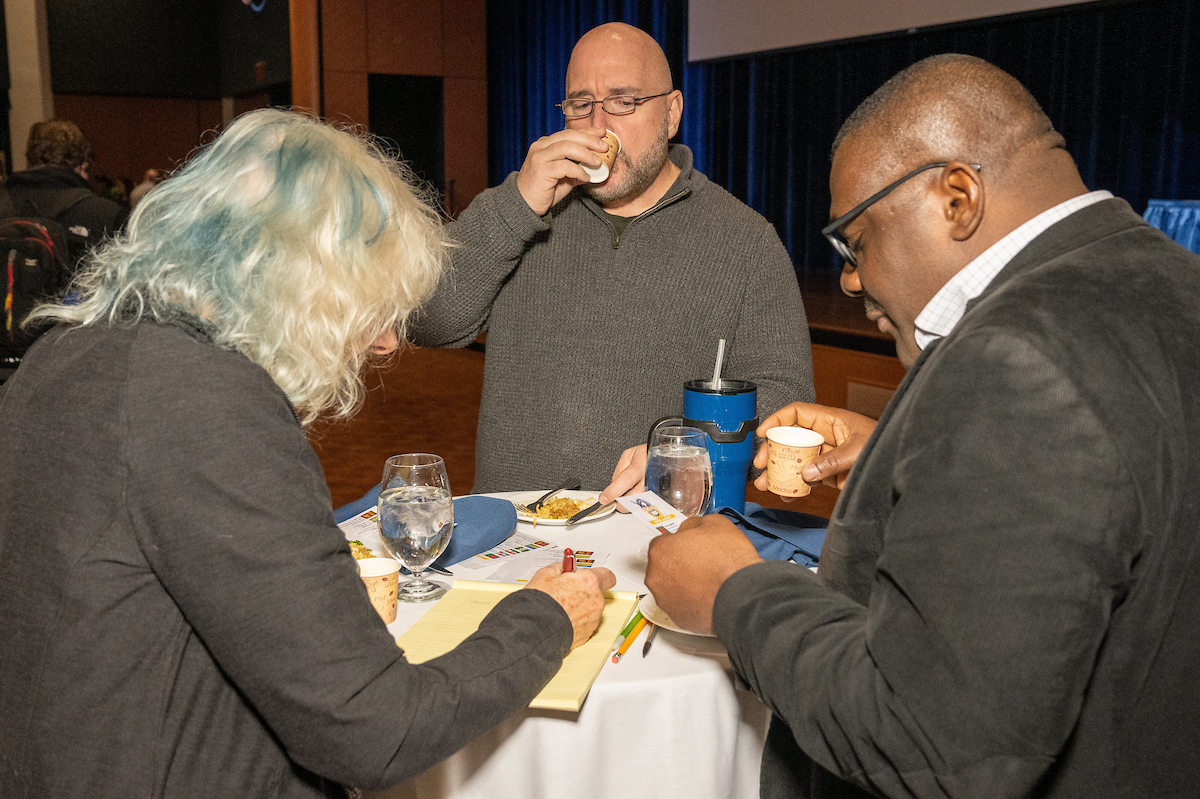 Recipes for the dishes served at the competition may be found here.