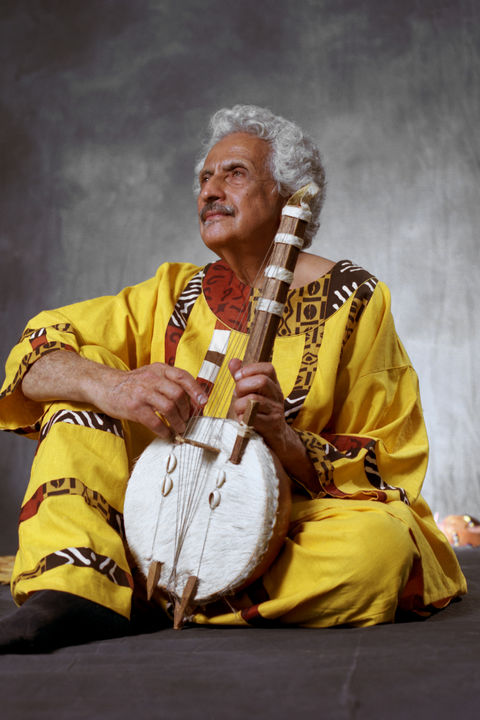 University Professor Emeritus Halim El-Dabh, who has taught at Kent State University since 1969, celebrates each birthday with increased musical productivity and world recognition. For example, on his 80th birthday in the spring of 2001, he performed a series of over 15 performances of his works and lectures, both at Kent State University and around the world. In May, 2001, he received an honorary Ph.D. degree from Kent State University, and continues to teach in Kent State's Department of Pan-African Studies and compose prolifically for all media. In August of the same year, El-Dabh was the guest of honor at an African music symposium held at Cambridge University in England.

Egyptian-born El-Dabh is internationally regarded as one of Egypt's most significant living composers, and he continues to travel and present his music the world over. From his pioneering electronic and electro-acoustic works from the 1940s and 1950s to his orchestral and chamber music, El-Dabh performs and collaborates with the world's greatest orchestras, including the Bibliotheca Alexandrina String Orchestra, under the direction of Sherif Mohie Eldin, the library's music director. This year is no exception; 2005 will be quite eventful for Professor El-Dabh.

In August, he is traveling to Cambridge, England to be the keynote speaker for the Fela Sowande (1905-1987) Memorial in acknowledgement of Sowande's many achievements as a musician, ethnomusicologist, and composer. Professor El-Dabh was a close friend and colleague of Chief Fela Sowande for many years. Known as the 'Father of Nigerian Art Music,' Chief Sowande also taught at Kent State University in the 1980s. Professor El-Dabh said he is honored to be chosen for this great occasion.

In September, El-Dabh has been invited to participate in the First African Electronic Music Festival in South Africa, where he is being honored as the 'Father of Electronic Music.' He is busy preparing his compositions for a new audience, innovations which he began in Cairo, Egypt early in his career in 1944, when most music was still acoustical.

And, in October, he is headed to the People's Republic of China as a special guest of the Central Conservatory of Music in Beijing from October 17-20, where his music will be presented in a commemorative two-day 'El-Dabh' performance of his contemporary classical compositions by musicians from Kent State School of Music and the Beijing Conservatory of Music. In addition, Professor El-Dabh will give workshops on traditional African music to Chinese scholars and students in fulfilling the conference's primary objective of promoting the 'Africa meets Asia connection.' The workshops will include samples of music from Egypt, Ethiopia, Nigeria, and South Africa.

Past projects, including the large-scale opera/theater piece 'Blue Sky Transmission: A Tibetan Book of the Dead,' was presented in 2002 in Cleveland and New York. His music for the sound and light show of the pyramids at Giza, first presented in 1961, continues to be performed there daily. A biography of El-Dabh by Kent State University music professor Dr. Denise Seachrist (who presented a series of lectures about El-Dabh in Alexandria), was published by the Kent State University Press in March 2003. In addition, 'Crossing Into the Electric Magnetic' (Released November 2001 by Without Fear Recordings), a CD compilation of El-Dabh's pioneering electronic works created during the 1940s through the 1970s continues to achieve wide distribution and favorable reviews from around the world.