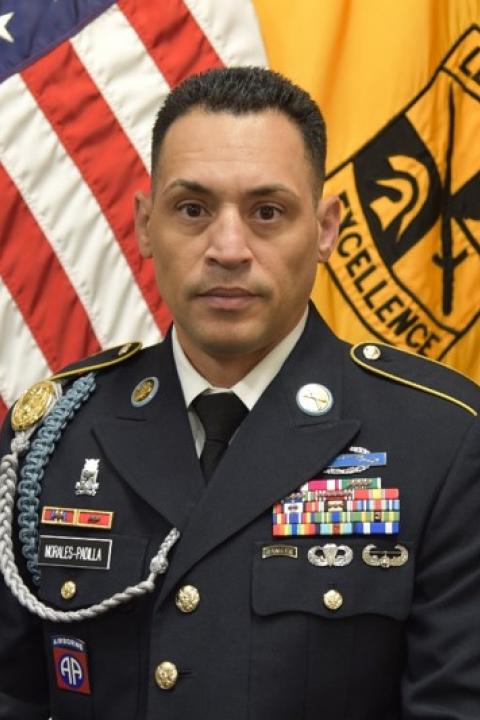 Master Sergeant (MSG) Morales-Padilla is from the island of Puerto Rico and enlisted in the Army in October of 2002. His first assignment was to Alpha Company, 1st Battalion, 505th Parachute Infantry Regiment at Ft. Bragg, NC. While assigned to Alpha Company he served as the 240B Gunner, M249 Gunner, M203 Grenadier, and as the Machine Gun crew leader. MSG Morales-Padilla first deployment was March of 2003 during major operations and transition to Global War of Terrorism. He deployed two more time with the 82nd Airborne Division. Also he has one tour to Korea for 12 months which he held the position of a Fire Team Leader, and was the boxing coach for his entire tour in Korea. He was then assigned to 172nd Separate Infantry Brigade at Grafenwohr, Germany. He held the position of Rifle Squad Leader and later on as the Weapon Squad Leader. MSG Morales-Padilla deployed two more time with the 172nd SIB. He was assigned to 2nd Battalion 11th Infantry Regiment, Ft. Benning, GA. MSG Morales-Padilla served as the one of the instructor for Infantry Basic Officer Leader Course (IBOLC). He then PCS and was assigned to 25th Infantry Division, Schofield Barracks, Hawaii. He held the positions as Rifle Platoon Sergeant, Scout Platoon Sergeant, and Company First Sergeant. MSG Morales-Padilla was then assigned to be the Senior Military Science Instructor at Kent State University.

MSG Morales-Padilla is married to Shakira and has two children, daughter Shanirys (16) and son Kael (13).

Army ROTC
Office of the Provost