Lauren Luna (B.F.A. ’00, Painting) has let nothing get in her way of her goal of making a living as an artist. Born in Columbus, Ohio, she moved to New York City shortly after graduating Kent State University with her B.F.A. and then ultimately to the city of Houston, Texas in 2011 to realize her dream. Since then, Luna has become known as their “city painter,” painting cityscapes of her new hometown, which eventually led her to recently establishing her own studio, co-founding a scholarship to support minority students in the arts, and even having the mayor of Houston proclaim a day in her namesake for her contributions to the arts. We asked Luna a few questions about her career and the path that led her to making her dream a reality. 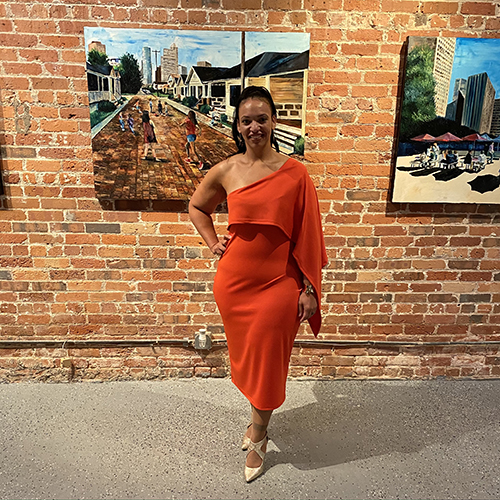 Q: Do you have memories of any classes and/or professors that were especially inspiring or helpful during your time at Kent State?

A: Each professor I had at Kent State, I will never forget, whether negative or positive the interaction. They all played a part in the development of my artistic skills.

Q: You have held a variety of jobs and careers in the arts. How did you decide where your artistic path would take you and how did you navigate that climate after graduation?

A: The end goal has always been to make a living as an artist. Unlike most traditional careers, there is no clear pathway in which to reach that goal. I’ve been a teacher for 18 years, teaching everything from Special Education to Art, and now am a part time art professor and full time professional artist.

I moved to New York City directly after graduating from Kent, to chase that dream of being an artist. Being fresh faced and young, I never caught that big break that I just knew would happen simply moving there and being talented. It was while I was there, I got a Masters in Special Education and started teaching. I also got extremely overwhelmed being young and in the big city and lost focus. I moved back home to Ohio with my infant son, and continued teaching there. I wanted to teach art, but my degrees didn’t match with requirements there. Eventually as my son got older, I was able to focus again on my goal of being an artist. I participated in shows, had a solo show, a line of custom sneakers that turned into a manufactured line of women’s heels, art markets and festivals, and finally to my current career with commissions, shows, features, etc. 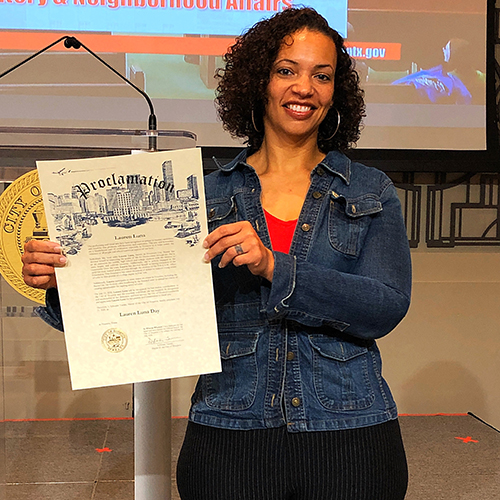 Q: You currently live in Houston, Texas. Can you talk about establishing your art studio there and what types of opportunities or honors you received since you’ve been there?

A: I just recently got the studio during the pandemic. There is a saying, “Only when it is dark enough, can you see the stars.” -MLK

Prior to this, having a studio at this huge artist commune was something outside of my ability. I just couldn’t justify the extra expense. But as a result of going full time artist during the pandemic, there were numerous grants that became available and it enabled me to finally have a space! I just recently was honored to receive a grant from  City Of Houston CARES Act Program for Arts and Culture. I was also given grants from Houston Arts Alliance, Alief Art House, and New York Foundation for the Arts. Outside of the grants, I was also given the honor of having a day proclaimed in my honor. July 11th was proclaimed by the Mayor of Houston, Sylvester Turner, as Lauren Luna Day, because of the artistic contributions I’ve made within the nine years I’ve been here.

In 2015, I won Best in Show for a juried art contest. As a result of that, I was commended by the school district I was working for at the time, and then put on Congressional Record for the win!

Houston has literally allotted me everything I’ve been working for my entire life. Make no mistake, it did not happen by chance! It was one hundred percent in response to the output of work I was putting in. 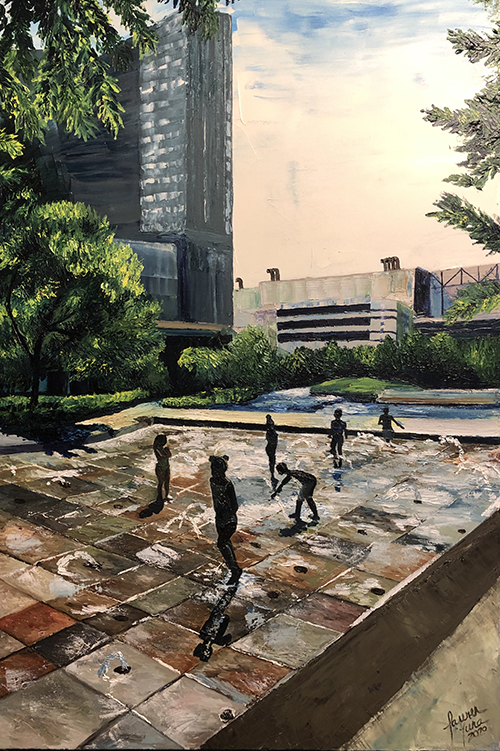 Q: What is the D.R.E.A.M Affect Foundation and why did you start this organization?

A: D.R.E.A.M. stands for Dedicated to the Realization of Economic Artistic Mobility. The D.R.E.A.M. Affect Foundation is a (soon to be) non-profit that is an umbrella for the D.R.E.A.M. Scholarship and the Living the D.R.E.A.M. grant.

In 2018, I began the organization of this non-profit, joining my connection with the Houston art community and the underrepresented minority presence within the fine arts. There is an immense quantity of talented minority artists. Sadly, because of stigma, finances and a host of other reasons, they do not get the academic training in the arts. My goal with starting this fund was to at least help out with the financial aspect of being an art major. The stigma facing art majors is so ingrained within society, that it is another challenge in itself.

Q: Do you have any advice for current students?

A: Dig in, and focus on your goals. Others' ideas of where you are/should be in society, don't have to be yours. No one will ever believe in you more than you can believe in yourself.

Lauren Luna has a solo exhibition titled "Urban Playground" currently on view at the Bisong Gallery in Houston and is an art professor at Lone Star and San Jacinto Colleges.