Raimondi’s lecture entitled “The Evolution of Monumental Sculptures” recounted the process in which he creates the mammoth bronze (and sometimes steel) sculptures, which soar as tall as 60 feet. The lecture is free and open to the public.

Raimondi is a creator of monumental works, which are solid in form and fluid in movement. His sculptures are known for their lyrical qualities. He is arguably the most successful creator anywhere of public sculpture on a monumental scale, with works in twenty-seven states and several European countries.

Raimondi has completed more than 100 monumental sculptures for public, corporate and private collections worldwide. His current work, incorporating the myths and iconography of Native American Indians, uses the tension created by sweeping lines to evoke the courage and tragedy of a proud and noble people. Raimondi is of international distinction. “I will be showing a 43-year history highlighting the monumental sculptures that I have done across the country and world,” said Raimondi.

“Students will definitely benefit from Raimondi’s strong and varied art background,” said Effie Tsengas, coordinator of the Schroth Series Lecture. “His vast knowledge comes from his avid art collecting.” Raimondi said, “I’ve been collecting art for as long as he’s been making it.” During Raimondi’s visit, he will be doing studio visits with a diverse group of art students at both the graduate and undergraduate level.

What all these series have in common is Raimondi’s classical sense of design and craftsmanship, an aesthetic developed while studying at the Portland School of Fine & Applied Art (now the Maine College of Art), Massachusetts College of Art and Harvard University. 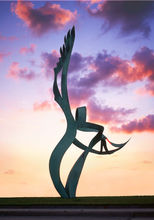