Kent, Ohio — On Sunday, Jan. 30, 2022, the Kent State Wind Ensemble traveled to Cleveland’s Severance Music Center as a featured ensemble of the Northeast Ohio Band Invitational (NEOBI), a day-long celebration of music organized by Dan Crain, conductor of the host ensemble, the Cleveland Youth Wind Symphony. This year marked the 20th anniversary of NEOBI, which was created as a community outreach project to give young musicians the opportunity to perform in one of the world’s greatest concert venues. Other invited bands included Margaretta High School, Clyde High School, Ontario High School and Wooster High School.

“Performing in a concert hall like Severance is a rare opportunity for any musician,” said Kent McWilliams, D.M.A., professor and director of the Glauser School of Music. “It represented a wonderful occasion for our students to experience one of the world's best concerts halls. What makes this even more special is that they’ll return to perform again in May 2022 as part of our upcoming, school-wide concert, ‘Stories of Peace, Protest and Reflection’.”

Wendy K. Matthews, Ph.D., associate professor of music education, director of bands, and conductor of the Wind Ensemble, led the group in three of the four works on the program, which included faculty guest soloists and a world premiere. On the program were “Aegean Festival Overture” by Andreas Makris, Concerto for Marimba by Ney Rosauro performed by percussion professor  Matthew Holm, D.M.A., and “For Those Who Fell”  by compostion professor Adam Roberts, Ph.D., featuring Perry Roth, D.M.A. Matthews was joined on the podium by Darin Olson, D.M.A., director of athletic bands and associate director of bands, who conducted Donald Grantham’s “Baron Cimetiere's Mambo.”

“It was testament to the outstanding work of our Wind Ensemble students to receive an invitation to perform as the exhibition band for this prestigious event,” said Matthews. “It was thrilling to be able to conduct on this world-famous stage and share the experience with my students and faculty colleagues. The Wind Ensemble performed spectacularly and we grateful for the opportunity to share our music making with such a large audience that included the high school bands and our friends and family.”

Gabe Parish, senior trumpeter and music education major, remarked, “Playing on the same stage as legends was very meaningful because the history that has taken place on the stage. It was great to be part of that history”

“When I first walked in, I felt like I was walking into a 1700 Mozart opera house,” observed Isaac Austin, junior percussionist and music education major. “This made me feel like I was a professional musician. The stage sounded wonderful.”

One highlight of the program was Kent State faculty composer Roberts’ work “For Those Who Fell”—a piece that musically depicts an imagined version of the May 4, 1970, Kent State shootings. Roth, Kent State's saxophone instructor, was the featured soloist. A longer version of the work received its world premiere with the Wind Ensemble in December 2021 with saxophonist Noa Even, D.M.A., from Rowan University performing a version for soprano and alto saxophone and wind ensemble.

"It was a real pleasure and honor hearing my piece in Severance,” said Roberts, “which is sacred ground in a way, being the home of The Cleveland Orchestra. I'm grateful to Wendy Matthews for playing ‘For Those Who Fell’ twice in close proximity. Perry brought a refined, lyrical, golden sound to this performance that was particularly beautiful in the elegy at the end."

The next opportunity to hear the Kent State Wind Ensemble is Sunday, Feb. 20 at 3 p.m. in Cartwright Hall. They’ll be joined by the Kent State Symphony Band, led by Olson, performing works by Reed, Tradici and Roost on the first half of the concert. Matthews leads the Wind Ensemble on the second half, performing works by Rossini, Beethoven, Copland, Grainger and Escaich. Tickets for are $10 for adults and free for those 18 and under. Find more information and buy tickets at www.kent.edu/music/concerts. 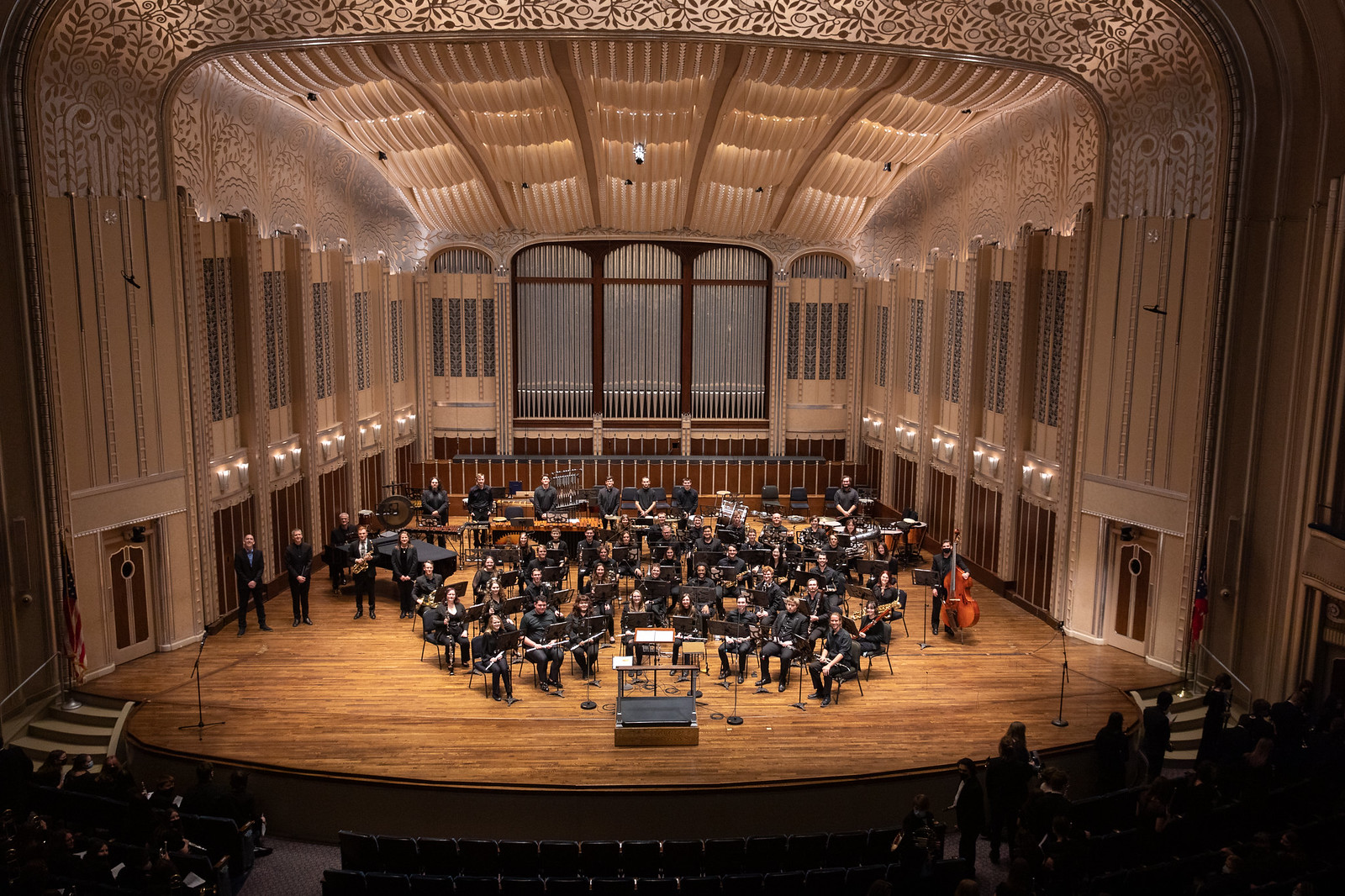