Nick Cave is an artist, educator and foremost a messenger, working between the visual and performing arts through a wide range of mediums including sculpture, installation, video, sound and performance. "I have found my middle and now am working toward what I am leaving behind," said Cave. Cave is well known for his Soundsuits, sculptural forms based on the scale of his body. Soundsuits camouflage the body, masking and creating a second skin that conceals race, gender, and class, forcing the viewer to look without judgment. The “Soundsuits ” are unique, full-body outfits crafted from discarded objects found in antique shops and flea markets. The kaleidoscope of colorful works of art is wearable fabric structures that are considered part sculpture, part costume. The hybrid creations have been described as part Alexander McQueen, part Andy Warhol, and wholly bizarre, brash, and beautiful. He combines elements of sound, performance, color, and costume to create whimsical works that even the darkest soul would find hard to resist.

Born in Missouri, Nick Cave showed an early talent for performance before moving to New York City to dance with the Alvin Ailey American Dance Theatre. Followed by visual art studies in Missouri and Michigan, Cave's genre-expanding work straddles both dance and visual art to explore the ways that African identity is subsumed into disparate cultural codes. Director of the fashion graduate program at the School of the Art Institute of Chicago, Cave has built a notable reputation as an educator and artist. 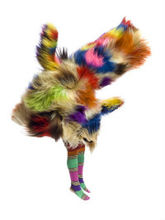