The U.S. Department of Labor’s Office of Federal Contract Compliance Programs (OFCCP) and Executive Order 11246 requires federal contractors, like Kent State University, to establish an affirmative action program. Such a program is designed to ensure equal employment opportunity in every aspect of the employment process. The contractor must annually assess its workforce and compare it to the composition of the labor pools it utilizes. If the contractor finds that certain populations are underrepresented, it must make a plan to rectify the under-representation. Additionally, the contractor is required to evaluate its employment decisions and compensation systems to ensure they are equitably administered.

At Kent State University, the Office of Compliance, Equal Opportunity, and Affirmative Action (“The Office”), within the Division of Human Resources, is responsible for annually assessing the University’s workforce and developing an Affirmative Action Plan (“the Plan”). The Office is also responsible for communicating the Plan findings and goals to each Division, and plays a key role in supporting them in their efforts to meet those goals.

Below is a comparison of Kent Campus incumbency by gender, minority (African-American, Hispanic, Asian, American Indian, Native-Hawaiian and Other Pacific Islander, and two or more races) and non-minority (Caucasian) categories for the 2016-17 and 2017-18 Affirmative Action Plan years. While incumbency rates have largely remained consistent with faculty and staff since the 2016-17 plan, even despite a substantial drop in total faculty and staff, it is apparent that additional strategies need to be considered to increase minority representation in both areas. 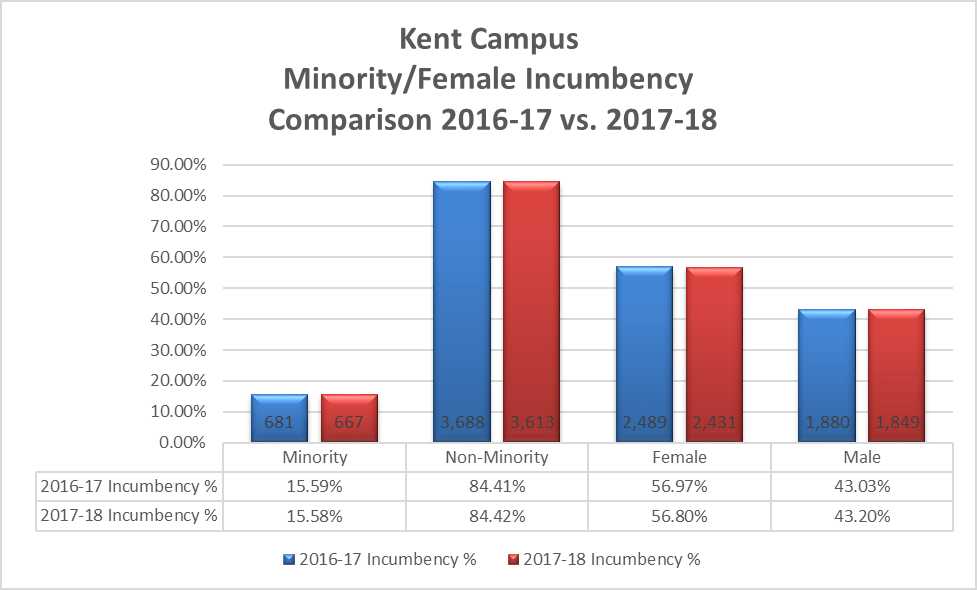 Unlike 2016-17’s AAP, this year Kent State’s faculty was analyzed by areas of instruction. This is the appropriate methodology for comparing incumbency levels to the expected incumbency, based on labor market availability. Given this change in approach, there were many more areas of under-representation in regards to faculty. The areas of under-representation are detailed in the AAP and are too numerous to list in the Executive Summary.

Regarding minorities, a comparison of Kent State’s 2017-18 incumbency levels to the expected incumbency, based on labor market availability, indicates that there is continued under-representation of minorities in Upper Level Management Deans/Assoc/Assit (1C) and Upper Level Management Chairs and Directors (1D). However there was a large improvement in the representation of minorities by job group, and there is no longer under-representation of minorities in Lower Level Managers (1E), Upper Level Professionals (3A), Lower Level Professionals (3B), Upper Level Clerical (4A), Mid-Level Clerical (4B), Technician/Other Specialties (5A), Technician/Elec/Data Process (5C), Craftworkers (6A), Service/Maintenance/Delivery (7A), Service/Maintenance/Cust/Maint/Repair (7B), Service/Maint: Protective Serv (7C) and Service/Maint: Food Service (7D). This is a vast improvement from the previous year as eleven (11) fewer groups are under-represented in the 2017-18 AAP when compared to the prior year.

The Office of Compliance, Equal Opportunity, and Affirmative Action will meet with each executive officer and their hiring manager to discuss the demographics of their Division and next year’s hiring goals. Additionally, the Office will collaborate with the Divisions on a plan to address under-representation in their identified job groups.

A copy of the entire Affirmative Action Plan is available online at: