Being hunted by unseen predators isn’t the way most researchers conduct their work. But for some, it’s just part of the day.

“The animals that most concerned me were the large cats, like jaguars, pumas, but also snakes, and monkeys,” said Emmaleigh Given, Kent State aquatic ecology graduate student. “The workers told me that the jaguars would hide from people, but the pumas would hunt you quietly.”

Ms. Given recently spent three summers and two winters in a remote biological reserve in the middle of the rainforest in the Alajuela Province of Costa Rica, where she has and will spend several months conducting research on community ecology, and she has one more trip planned. The key word here is “remote.”

The group was miles away from a store or medical facilities in the heart of the wilderness surrounded by nothing but nature - and not all of it was friendly.

“The bigger danger were the fer-de-lance snakes, which like to sit and sunbathe along the stream banks where I would sit and do my work,” Ms. Given said. “My adviser told me that if I were to be bit by a fer-de-lance that my best bet would be to lay down in the forest and die because there were no hospitals close enough to save me.” 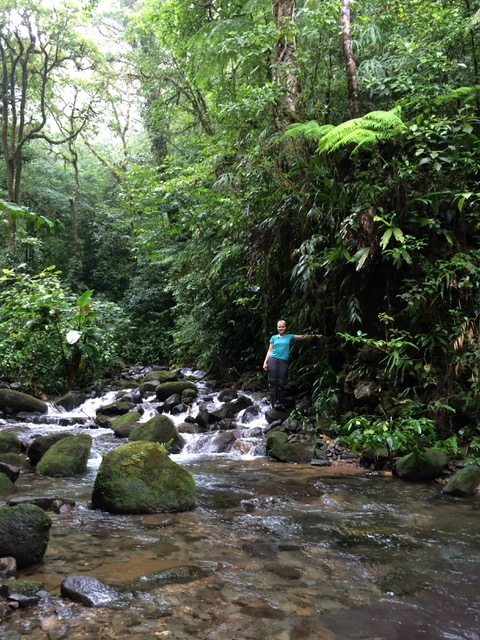 But for Ms. Given, the rewards are worth the risks.

“I am very interested in how ecological communities assemble together,” Ms. Given said. “So what types of insects are found in which type of communities, and what is the factor in deciding that? That is the overarching principle of my research.”

Ms. Given specifically chose Kent State for her graduate program because of the opportunity to go to Costa Rica for months at a time. Ms. Given is currently working on her Ph.D.

“We really have no idea how these systems work. Not a lot of people do research in those areas because they are remote,” Ms. Given said. “The sites were both hard to get to and difficult to live at, which is your only choice unless you have local connections.”

Living in a rainforest is a completely different way of life. From cooking food to doing laundry to showering and practicing normal hygiene.

“Washing your laundry in the middle of the rainforest,” she asked, “how do you do that? You don’t have dryers, and it rains all the time, so your clothes are never dry. The only way to get things to dry is by using a dehumidifier inside of the room,” she says.

To minimize the need to wash laundry, Ms. Given learned to be conservative with her clothing and wear certain clothes in the field and others back at the reserve.

The showers were built in tiles outside. The water was always cold unless it happened to be an extremely sunny day.

The food was prepared by staff who worked at the reserve. The staff would be there four out of seven days a week. They would help with maintenance, food preparation and some research.

“They would bring a truck with all the food that they needed every time that they came,” Ms. Given said. “Mostly they just had dried beans and dried rice and sometimes they had vegetables.”

The reserve ran on hydroelectric power and had dial-up internet that only one person could use at a time. It was a surreal experience according to Ms. Given, and one that went beyond first-world problems of slow internet.

“It wasn’t like feeling scared - it was more like coming to terms with it,” Ms. Given said. “You go and live in this world in Kent, Ohio, and other people are the danger there. But when you’re in the forest, you are at risk. It was quite terrifying when you think about it. We just never knew what kind of day we were going to have when we went into the field.”

And that included the big cats, the snakes and, of course, the monkeys. 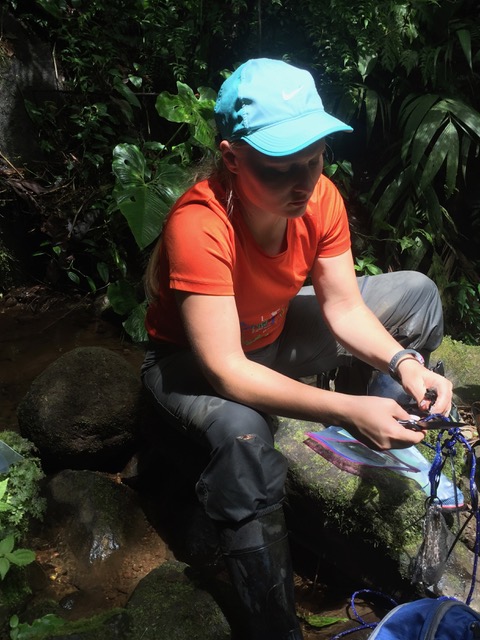 “Although we did not see them often, the monkeys at the reserve were terrifying,” Ms. Given said. “They were white-faced capuchins that traveled in packs. And unlike the monkeys at resorts or in towns, they were wild, mean and did not come into contact with humans regularly. We crossed their path one time and had to turn back to the reserve.”

Another danger is the river itself. During the rainy season water levels could spike and make passing the main channel impossible, she says.

“Many times we would be out working, and it would begin to rain. If we would see the main river begin to get brown and muddy, we would have to turn back,” said Ms. Given. “To get to my field sites, we had to cross that river several times along our hike by hopping across slippery algae-covered rocks. I was always afraid of one of my assistants falling and breaking an ankle or leg and having to be carried out of the forest. Or worse, being washed away while trying to get back to the reserve camp when water levels were too high and dangerous.”

Ms. Given completed three research projects with the help of her undergraduate assistants. Each time Ms. Given went to Costa Rica she brought one student with her. She submitted two of her research projects for publication in the Society for Freshwater Science.

“Not everyone might get the chance to do something like this. That’s why I felt like I had to try,” Ms. Given said. “I knew I would regret not trying to do it. I definitely wasn’t sure if I would enjoy the experience, even just being in a different culture away from everything I knew. But each trip that I made, I learned something each time.”

Ms. Given’s next trip to Costa Rica is in December, and it will be her last one as a student. Ms. Given said she would love to embark on a career studying tropical biology or tropical stream ecology because it is an understudied area.

“I have always been ambitious, it’s kind of like what’s the next thing, where can I take this?” Ms. Given said.

Ms. Given wants her work to inspire other students to do research in the tropics and step out of their comfort zone.

PHOTO1: EMMALEIGH GIVEN STANDING ALONG THE SAN LORENCITO RIVER, THE MAIN CHANNEL THAT FUELS THE HYDROELECTRIC POWER FOR THE RESERVE.

PHOTO2: EMMALEIGH GIVEN SITTING ALONG THE STREAM BANK UNTANGLING ROPES ATTACHED TO TEMPERATURE AND LIGHT SENSORS.