His Song Lives On

Born July 27, 1971, to Jim and Mary White in Barberton, Ohio, Aaron was never the strongest in academics or athletics, but he found his place in the arts.

[Aaron White] He loved music – any kind of music – and his mother played a role in that.

“When Aaron was growing up, I would play all kinds of music while I cleaned the house. Show music, Sonny and Cher – whatever. Just music,” Mary said. “It never occurred to me that it would have an impact, but it did. Aaron came home one day and said ‘You know what mom? I’m glad you played all that music because now when I hear about it in school I know what the teacher’s talking about. I know Camelot, I know Grease, I know Funny Girl. I know what the Wiz is!’”

Aaron sang with the Saint Augustine’s Children’s Choir from fourth grade through eighth grade, longer than any of the other boys. But he did not stop there.

While attending Barberton High School Aaron took voice lessons from a Kent State University alumnus, and also performed in the show choir and all of his high school’s musicals.

“The director actually chose the Music Man play because she wanted Aaron to play the lead,” said Christine Olle, Aaron’s sister. “She chose that play based on his talent; she wanted to hear him sing the songs.”

He loved every minute of the musicals, from easily memorizing the enormous scripts, to the music he got to perform onstage. 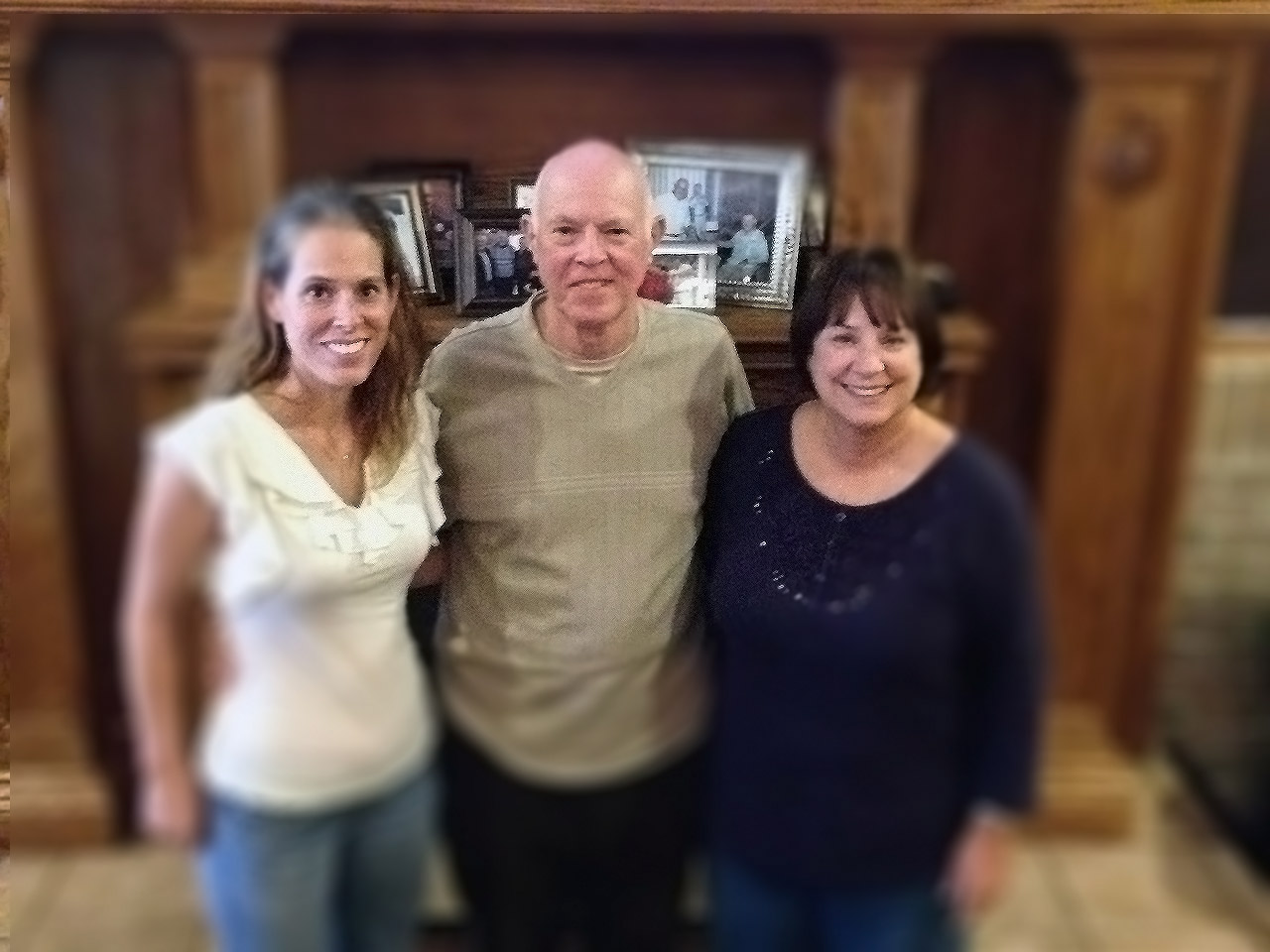 Mary told us, “When he was getting ready for school one day he said, ‘You know mom, I can’t think of anything better than being able to sing all day.’”

Aaron’s high school vocal teacher, Julie Sterman, felt Aaron had what it took and encouraged him to pursue a career in music. When he applied to Kent State University’s College of the Arts, he received a vocal scholarship and was extremely proud.

“In the hallway at Barberton they have 8 x 10 pictures and information about the kids who received scholarships,” Mary said. “And there was his picture, on that wall. I remember looking at it and thinking ‘Who would have ever thought?’ He struggled in school, so receiving a scholarship was pretty cool for him.”

One of the family’s favorite stories about the impact of Aaron’s music happened on a Christmas morning while Aaron was a student at Kent State.

“Every year, we went to mass at 6 a.m. Christmas morning. When Aaron was in college he was a little defiant, but he would still come to Christmas mass with us,” said Mary. “Everyone in the church would sing all the Christmas carols during those masses, but one time, everyone in the church stopped singing, one by one, until the only one left singing was Aaron. The others had stopped singing because they wanted to hear him. When the mass was over a woman, probably in her 70s, turned around to face him and said ‘Thank you. You gave me my Christmas present today.’”

Aaron graduated from Kent State in 1994 with a degree in vocal performance. Soon after graduation, Aaron took a trip to Chicago to visit friends. During that trip he fell in love with the city.

“He came home and said, ‘I’m moving to Chicago,’” Mary said. “I asked him what he was going to do there. He said ‘I don’t know. I’m scared, but I really want to do this.’ We made sure he knew he could always come home, and let him know we supported him in his decision.”

While in Chicago, Aaron found it hard to get established in a music career but continued to surround himself with it, and use his talents to bring joy to those around him.

“He lived in Chicago and rented an apartment from a guy who owned a brownstone,” Jim White said. “The guy had a piano on the first floor. Aaron would go down all the time and play the piano and sing. One day he told Aaron to take the piano upstairs so he could play it any time he wanted. He got a bunch of his friends, and they managed to carry that piano up a winding staircase to get it to his room.”

After that, Aaron could be found sitting at the piano, playing and singing with the windows open. At one point, a neighbor on the floor above him walked out onto the connecting patios to see who was singing.

“When he got to Aaron’s open window he couldn’t believe it was Aaron, because Aaron had never told him that he sang,” Jim said. “The neighbor later told us he thought that was the greatest thing, when Aaron would open all his windows, play that piano and sing.”

Christine has the piano now, and her daughter Kayla is taking lessons on it.

Aaron found employment in Chicago that matched his bright outlook on life. He led art therapy at the Peach Tree Montessori School, where he loved working with the kids and realized he looked forward to having his own someday. He then worked at a home for the mentally challenged and also worked at Ear Wax, a vegan restaurant/café in Wicker Park, Chicago. His last endeavor was working for TakÖhl jewelers, owned by Tammy Kohl, where he was thriving just before the accident that would claim his life happened.

Expressive, spontaneous and joyful Aaron White lost his life as the result of an auto accident in Chicago on January 24, 2003.

The devastated family began making arrangements, and one of their first calls was to Kent State.

“When we were planning Aaron’s funeral,” Mary said, “we called the Kent State School of Music to request a student to sing a song during the services. I spoke to one of the vocal professors, and she remembered Aaron right away; she said she would take care of it for us.”

The family was hoping a student would be available to perform, but they got much more than they expected.

“When she called me back,” Mary said, “she told me all five of the vocal professors wanted to sing during the funeral. I couldn’t believe it. They all came, and that really made a big impression on us. They didn’t have to do that, but they did – they did for Aaron.”

“We received a lot of donations at his funeral and it felt right to send them to Kent State,” Jim said. “After that first donation, someone would call us once or twice a year and ask if we wanted to make another donation, and we always did because we thought it would be good to give to the School of Music.”

“Mary Sue from the School of Music would send tickets to the opera from time to time,” Mary said. “After one of the operas she asked if we had ever thought about establishing a scholarship. We had heard the process was easy, but at the time we were still dealing with Aaron’s loss, and it sounded overwhelming to us.”

Years later, the family feels Aaron took it into his own hands to do something about it. Kent State College of the Arts Advancement Officer, Shawn Gordon, noticed that the Whites had made several donations, for many years, to the School of Music.

"It was like the White’s name jumped off the page at me,” Shawn said. “I had never experienced anything like that before.” She called the Whites to thank them for their generosity over the past years.

When Shawn called, she introduced herself to Jim, who said “You know why we’re doing this, right?” Shawn invited them to lunch to learn more about Aaron. They met for lunch, and shortly after they sat down Jim announced to Shawn that they wanted to create an endowed scholarship in Aaron’s name.

Planning the scholarship has truly been a family affair. Christine has been involved in helping her mom and dad with the details, and will be executor of the scholarship after they are gone. And the family has felt Aaron’s presence with them from the very beginning of the process, every step of the way.

When someone endows a scholarship, they get to shape the eligibility requirements. For this scholarship, it was important to Aaron’s family that the academic requirements not be as demanding, because while Aaron didn’t have the best grades in high school, when it came to music he shined.

“We want to make it attainable to everyone who loves music,” Mary said. “It’s important to us because we know how he struggled academically in school but was so talented and passionate about music. We know how much the scholarship he received from Kent State meant to him, and so we know what this will mean to those who receive it.”

The Aaron M. White Endowed Scholarship for Vocal Performance will award the recipient $1,500 per academic year. While applicants merely need to meet the university’s minimum GPA requirements, preference will be given to a Kent State vocal performance student who is passionate about opera, as Aaron was. The scholarship will first be awarded in the Spring of 2014, and the family is eager to offer this opportunity.

“The most important thing we would want to tell recipients of this scholarship,” Jim said, “is to live life to its fullest.”

“Aaron did in his short life twice as much as we’ve done,” Mary added. “Whether he failed or was successful, or even if he was scared, he would just go and do it.”

“And he loved music,” Christine said. “The recipients will obviously be music lovers too, so I would tell them to keep the music in their hearts.”

Family and friends are overjoyed about the scholarship and know Aaron would love it. But Aaron’s niece, Christine’s young daughter Kayla, needed a little help understanding.

“She asked what the scholarship meant,” Christine said. “And I told her it means Aaron won’t be forgotten.”

To find out how you could contribute to or establish a scholarship and have a tremendous, lasting impact on students’ lives, please contact the Kent State University office of Institutional advancement at 330-672-2222, or email advancement@kent.edu.